Wednesday’s A Million Little Things Season 4 premiere found Jon’s widow getting hit with (more) terrible news: Her father, who’d remained in France when she came home to attend to Sophie, had suffered a stroke. This unfortunate event sealed the plan that she’d floated in the Season 3 finale: to return to Europe for good in order to have a fresh start after Jon’s death.

Though Sophie volunteered to accompany her mother on her new journey, Danny told his sister that her sacrifice was unnecessary; he would do so, instead. So the Friends of Jon gathered for one last pizza night to say goodbye — for now, at least — to Delilah.

Series creator/executive producer DJ Nash confirms to TVLine that Stephanie Szostak, who has been a series regular since Season 1, will be a recurring guest star in Season 4. The change, he explains, comes as a result of Canada’s mandatory 14-day quarantine for travelers entering the country. (A Million Little Things shoots in Vancouver, British Columbia. Szostak lives in Connecticut.)

“She has, for the first two seasons, lived away from her boys and from her husband,” the EP says. Her ability to work a few days and then fly home for the rest of the week “went away with COVID, because the second she stepped out of Canada, there was a 14-day reset,” he adds. “So we wrote her out for [Season 3], thinking, ‘Oh, she’ll be back.’ And then she said, ‘I really need to be with my family more, I don’t want to do all the episodes.'” 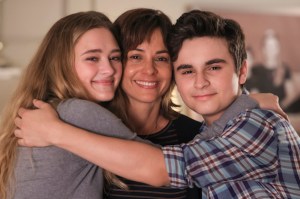 Nash says he was happy to work out a solution that kept Szostak on the series. “And that’s why I called the episode ‘Family First,’ the premiere, because I really get it,” he says. “And that’s exactly what our show’s about.”

Given the very supportive nature of the show’s core characters — “this group of friends shows up the second someone skins their knee,” Nash says, laughing. “They all go to the hospital!” — it wouldn’t make narrative sense for Delilah to be living in Boston but not be part of the gang’s daily life. The move abroad allows for more absence. “She’s in a couple early on,” Nash previews, “and then I know where we’re going for the season finale. And then hopefully in the middle, if she’s able to and we have the stories for it, we’ll do that, as well.”

He adds: “I’m hoping we see her more than we saw her last year.”

And what about Chance Hurstfield, who plays Danny? “I won’t say because we’re going to follow that story,” Nash says.

Elsewhere in the episode, we learned a bit more about what happened after Gary ambushed the music teacher who’d sexually assaulted Sophie — and it turns out, he had some help. Christopher, the father of the student who died by suicide after her encounters with Peter, was at Peter’s house with Gary on that night. “Did things escalate?” Nash muses, hinting that we’ll find out in the coming weeks. “What caused the escalation? Or was that always the plan?”

He points out that Darcy’s call might’ve changed everything… if only it had happened a few minutes earlier. “He’s going over there because he had nothing to lose, but if he’d had something to lose, maybe he wouldn’t have gone over there,” Nash says. “He lost Delilah to France. He’s lost Jon. He’s lost his mother. The FBI profile on Gary is a person who’s at his breaking point.