We’re referring, of course, to the final moments of the ABC drama’s Season 3 finale, which found Gary drawing Sophie’s lecherous music teacher Peter out onto his front porch, throwing a bag over his head and then bodily moving him back into the house, slamming the door behind them.

The move, coming from the generally affable actuary, was a shocking way to end Season 3 — though series creator DJ Nash tells TVLine that he’s threaded hints through the previous seasons.

“We’ve seen bits of it throughout the series, whether it’s him smashing the painting with Jon or him punching the car and having that guy pull a gun on him,” the executive producer says. “It probably goes back to the anger he feels about his mom leaving him. He definitely wants the world to be just, and it’s not, and I think he tries to line up justice wherever it’s askew.”

When he can’t — such as when Sophie’s complaint of sexual harassment isn’t enough for the police to arrest Peter — “it’s really hard for [Gary] to accept that,” Nash adds.

Elsewhere in the two-hour season-ender:

* Darcy decided to move to Lenox, Mass., so Liam could be close to his dad. After much deliberation, Gary decided to move with her. But when he mentioned that he thought their future involved having a child together, Darcy made it clear that she did not want that. Later, though, she had a change of heart and called Gary, leaving him a voicemail saying that she thought he would make a great dad and maybe they could discuss the possibility. But he was busy when the call came. (See above.) 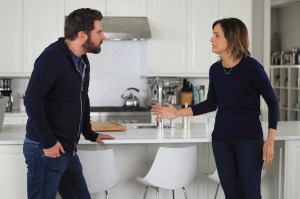 * Delilah returned from France in time to accompany Sophie to the police station, where she told a detective about what Peter had done to her. She also handed over Layla’s diary as evidence. But the detective sadly told her that it wasn’t enough to arrest Peter, though he thanked her for giving them something with which to start a file on him. Gary got really mad and kicked a garbage can across the room.

* Soon after, Delilah told Eddie that she wanted to move back to France with the kids. Danny and Sophie balked at the news, and Gary lit into Delilah. “I’m so sorry you’re not happy, but you know what? I’m not sure you’re entitled to be,” he said. (And that wasn’t even the meanest part!) The interaction left Delilah sobbing.

* Regina made the tough decision to close Someday, which had been failing in the wake of the COVID-19 pandemic and her concussion. Meanwhile, Rome comforted Tyrell after the teen learned that his mother’s deportation stemmed from getting pulled over by police while driving to FedEx his application for a summer program. 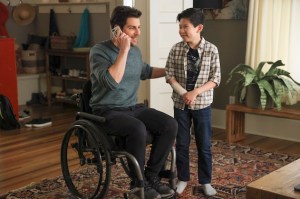 * Theo burned his hand on Katherine’s watch; Eddie’s lawyer told him to get photos of the injury so they could use it against Katherine in the custody battle. So Eddie did, but he felt bad about it and later told Katherine that he wouldn’t use the photos against her. Instead, he drew up an agreement for joint custody, in which he can be with Theo without supervision and in which he will take a weekly drug test. If he fails, she gets full custody. “I promise, I will not fail Theo,” he said.

* But that wasn’t all Eddie was up to. He answered a call from a blocked number, thinking it was a telemarketer, but the woman on the other end was crying. “I’m the person who hit you,” she said, apologizing.

* Gary visited his father, who tacitly agreed to give him an alibi for the evening. Then Gary went off and did the bad thing.

Read on as Nash breaks down the packed episode: Eddie’s call, Gary’s premeditated act, the possibility of new romance in Season 4 and more.

TVLINE | I was shocked when we saw what Gary did in that final scene. How in control of himself would you say he is there?
Well, he goes to his dad’s and sets up an alibi, so this wasn’t… It appears as though whatever he does behind that door is premeditated.

TVLINE | I want Peter to undergo slow and painful torture, but still, I don’t want Gary to do it.
I remember the idea for the last scene came to me much earlier in our season… Elizabeth [Laime], one of our writers, has been very forthcoming about sharing her story, and it led to a beautiful heartbreaking story about Sophie… I had this idea for this scene, and I knew just this one scene could actually be tacked on a bunch of episodes, because it does sort of stand alone. The way we’ve done it with the podcast, it became a piece where Sophie’s commenting on other casualties and the other people who are hurt by what Peter did. But we shot that scene before.

When I got the idea for the scene… I called Elizabeth to go, “Hey, I just want to make sure you’re OK with this story,” and she goes, “I love it.” Because part of what our show is is a bunch of writers talking about their pain and maybe writing different endings, you know? You write the version of your parents’ divorce you wish had happened, or you write the version of losing a friend to suicide. I mean, they all come from very personal places. So, then I talked to James [Roday Rodriguez], he said to me, “What happens on the other side of that door?” … And then he said, “OK. Love it. Where do we find moments of that leading up to it?” He and I talked pretty extensively, because I wanted him to play some subtle moments. Whether it’s something a little more overt like kicking the trash can in a police station, [and] there are other moments that when we get to next season, you’ll realize, oh, did they know here? And those are moments that he and I and the directors found to place.

TVLINE | I was —
I’m not suggesting for a second in any way that what Gary went over to do is something people should do. [Laughs]

TVLINE | I will make sure that we leave that part in. So can we talk about the call Eddie gets at the end of the episode?
What I love about this show is there’s enough plates spinning that… we can get you to forget about one essential plate, and then we can come back to it. It had been enough time now where people had figured, “Oh, maybe it’s not playing out.” Also, [I had to] decide how much of that call to put in the finale. That call goes on.

TVLINE | With Katherine and Eddie breaking up, you now have two more players that can mix it up with others.
Yeah. 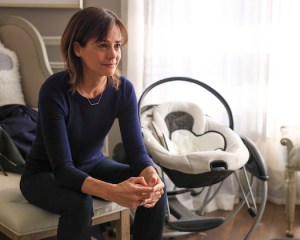 TVLINE | And I know you’ve said that Gary and Delilah are not going to be a thing.
They will never be a thing!

TVLINE | You’re going to get into Season 10 and you’re going to be like, “Remember when I told you they were never going to be a thing? About that…”
[Laughs] When that story happens, you’ll be like, ‘Oh, you must not be on the show anymore.”

TVLINE | What I’m getting at is that it feels like we might see a bunch of new faces next season. Is that at all on your radar?
Yes. There will be people in their lives, and I’m happy to tip that we’re going to see Katherine — Carter set up a dating profile. Is something happening there? And we’re seeing Eddie, who is single for the first time in a long time, and single for the first time ever in a wheelchair, and we’ll see how he gets the confidence and the courage to go out there again.

TVLINE | Poor Regina with her concussion and her restaurant going south. Tell me there’s some brightness coming her and Rome’s way.
Well, I actually think there already is. I think there already is… If you look at where Regina ended last season — with thinking that she had this baby, and this mom changing her mind, and her being devastated — where she ends the next season is with her baby consoling her. So I don’t think that’s sad at all. But she does have to figure out what her next chapter of her life’s going to be, and it’s not going to be easy.

Now it’s your turn. What did you think of the episode? Grade the finale and the season on the whole via the polls below, then sound off in the comments!