This week’s Evil brings to mind that old chestnut: You’ve gotta manipulate a few eggs if you want to foment the world’s descent into darkness.

David’s decision to focus on RSM Fertility really kicks into gear in Sunday’s episode, in which we learn that one of the eggs left over from when Kristen underwent in vitro fertilization has gone missing under nefarious circumstances. (And somewhere, The X-Files‘ Dana Katherine Scully pulls out a chair at a meeting of the Screwed Over By Science support group, nods knowingly, and pats it in welcome.)

Elsewhere, Ben unwittingly cheats on Vanessa. Kind of. Read on for the highlights of “O Is For Ovaphobia.”

AN EGG-STRORDINARY STORY | When David and Ben question her, Kristen can’t recall anything out of the ordinary about her experience at the clinic. She gets a little testy when Ben starts probing more pointedly. “Is the question whether or not Lexis is showing signs of being a psychopath?,” she asks. He says no, but they’re going to talk to other moms who used the same service.

These include Matilda’s mother — remember Matilda, the alleged firestarter? — who informs us that her daughter burned down her foster parents’ home. She, too, doesn’t recall anything weird about RSM, save for the rude way they informed her that she’d stopped paying rent for her stored ova. When she mentions that Matilda’s teeth came in “very sharp,” though, particularly the canines, it brings Kristen up short. 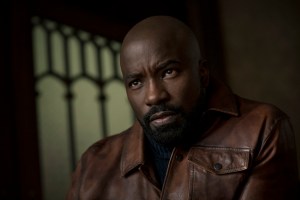 When Kristen calls the facility to ask about her dozen leftover eggs, for which she hasn’t paid storage fees in six years, she’s informed that someone else has been maintaining the account. Eventually, a friendly receptionist at RSM breaks protocol and whispers to Kristen that a Dr. Kara Autry — who no longer works at the clinic — is footing the bill.

Dr. Autry’s cover story, when Kristen visits her private practice, is that her faith prohibits her from destroying the unused cells. It’s also important to know that Autry was the doctor who presided over the in vitro that produced Eric, the kid from Season 1 who tried to drown his baby sister. When Kristen threatens to bring Autry up on malpractice charges, the doc immediately turns nasty, implying that she’ll lie and smear Kristen in court if any case goes forward. Minutes after their visit, Autry leaves and goes straight to… any guesses? Leland’s apartment.

The next day, Kristen, David and Ben are informed that Dr. Autry has gone on vacation. And when Kristen marches into RSM with a court order to return her 12 eggs that day, the woman at the front desk says there are only 11 in storage. Kristen demands to know what happened to the other one. “We’ve always only had 11,” the woman says, and her smile is SO CREEPY. 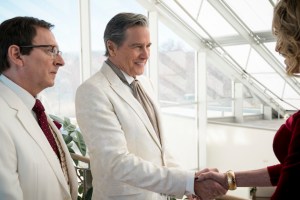 SHERYL IN PERIL | If you’re wondering what came of Sheryl’s dinner at Leland’s, the answer is: nothing good. He invites her to a meeting of “influencers” in the Hamptons, and she steals a va-va-voom red velvet dress to wear for the affair. (Little does she know, it’s a white party.) Leland introduces her to Edward (Virgin River‘s Tim Matheson), who is very vague about the “influencing” he does for companies. Still, he wants to meet up with her in the future, so she gives him her info.

Cut to another evening, when Sheryl joins Edward at a swanky bar. He hands her a drink he happens to have waiting for her, saying it’s “poison,” and — woman, no! — she drinks it and laughs. They wind up tipsy at Leland’s, and it’s all fun and games until Sheryl realizes she can’t move her legs or scream. That’s when Edward and Leland lay her on the ground and tap into a vein behind her knee. As she watches, paralyzed, Edward lies down next to her, and Leland does the same to him. Then there’s something that happens with jars and tubing and blood (I think?), but if you can figure out exactly what’s going on — I sure can’t —please lay it out for us us in the comments. Meanwhile, in a back room at Leland’s, Dr. Autry is trussed up like a corpse but very much awake and probably paralyzed, as well.

When David realizes that Dr. Autry’s car is still parked in front of Leland’s building, he goes inside… where he runs into Edward and Sheryl, who are dressed in coordinated outfits and goofily singing to each other. Edward tells David that Autry was there the night before but then “headed off,” and then the pair giggle their way down the hallway.

A CAUTIONARY TAIL | Throughout the episode, Lexis is glued to YouTube-like videos of Malindaz, the infernally assisted influencer we met in Season 1. The young girl’s self-esteem plummets with each viewing; eventually, she’s wearing baggy clothes, using teeth-whitening strips and wrapping her thighs in plastic to achieve the perfect gap. Kristen picks up on her daughter’s unease and pulls her aside to show her unfiltered, untouched photos of Malindaz, explaining all about filters, makeup and lighting. The talk seems to boost Lexis’ spirits, which is good, because when she looks in the mirror, we see that she’s grown a tail? (To her credit, by the end of the episode, she seems totally cool with it.) 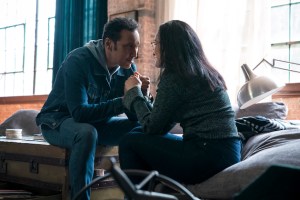 SISTER HACK | Finally, we come to Ben and Vanessa. Or is that Ben and Maggie? Allow me to explain. Vanessa is so sick of her sister’s ghost — whom she still believes is attached to her arm — messing up her life, she goes to a psychic for help. (She and Ben exchange “I love you”s, too, which is a nice moment.) The seer in question is Miss Marie from earlier this season; she banishes Vanessa with dramatic flair, and it’s pretty great. But the next time Ben sees his girlfriend, she’s dressed differently and acting differently. And by “differently,” I mean “hornily.” Ben starts to realize that maybe he’s sleeping with Maggie… but then Vanessa will seem to act like Vanessa, and it’s all very confusing. But one day, after a particularly athletic session in the bedroom, Ben gets a call on his cell — from Vanessa! She says she’s on the train. But it seems like she’s in the room? Can Maggie even be corporeal all on her own? Ben is so freaked out, he takes off.