Pound those pre-made margaritas and put on your shiny dresses, ladies. Because on this week’s Evil, Mama’s going out!

Is Kristen’s choice to frolic and flirt with dudes at bars the result of her possible possession? An acting-out side effect from buried guilt over committing murder? Or is girlfriend just really, really caught between an absent rock-climber husband and a hot potential priest?

The answers, as always in this show, are unclear. But that doesn’t mean we can’t have a good time guessing! Read on for the highlights of “F Is For Fire.”

THIS GIRL (SETS THINGS ON) FIRE! | After we see Kristen in bed, a soft smile on her face as a montage of abs, flames and — wait are those bare boobs? Yep, they are. Get it, newly streaming service show! — we cut to David laying out the sigil map for Sister Andrea, showing her the notations that Leland made in a language David can’t decipher. He reiterates all the stuff about the evil fertility clinic and its wiped-clean records (side note: Andrea Martin’s face here is amazing), then she realizes that Leland has used a bunch of alphabets in his notations — and she can translate. One of the notations says “Mowbray Mathilda.”

That leads David & Co. to a young girl who is being raised by foster parents who’d already contacted the Church about her troubling behavior. They want to adopt her, they explain, but things keep getting set on fire in her presence. (Her biological mother was arrested for setting a room on fire, too, we learn.) 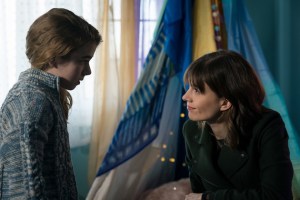 When Kristen talks to Mathilda, who is 9, the girl seems sweet and sad. She eventually warms up enough to Kristen to confess that “a man comes into my room when I sleep, ever since I was a kid,” and that he has no eyes and fire coming out of the top of his head. “When he’s angry with me,” she says, near tears, “he sets things on fire.”

Kristen later tells David she’s pretty positive that Mathilda is a pyromaniac. But the girl’s foster folks know about the fire man… and after watching a nanny cam that seems to show blames breaking out spontaneously in her closet, they believe her. Mathilda’s story reminds Ben of something, and at home that night, he asks his sister if she recalls their mother telling them a story about a man whose head was on fire. She says yes, the tale was about a jinn, and “no weapon can defeat it, only Allah.” However, as Ben points out, jinns can be good or bad.

And when Ben finds a plausible reason why the chemistry set in Mathilda’s closet might’ve started the blaze, the girl denies it — and then her eyes roll back in her head and she speaks Arabic: “A fire will burn whoever is close and jump to one of you.”

KRISTEN’S ON THE PROWL | Not long after, weird(er than usual) things start to pop up in our central trio’s lives. As Kristen drives home, she sees the jinn on a corner. Ben’s night terror, Abby, returns to tell him that his friends criticize his beliefs (“they think your religion is a joke”) and to engage in some scary/freaky hanky-panky that makes him scream. (Side note: The retainer bit made me howl with laughter. God, the Kings are really doing whatever they want on this show, and as I’ve said many times before, I’m HERE for it.)

Know who else is doing whatever she wants? Possibly Possessed Kristen! After another steamy montage, she gets all dolled up, leaves one of the girls in charge and hits a bar to entertain the interests of a fellow bar patron called Colin. She tells him she’s a climber. He notices her wedding band. “You divorced or something?” he asks. “Something,” she says. She’s about to leave with him but changes her mind at the very last minute. In her car, alone, she muses aloud about how the next time, she’s staying — and that’s when she notices the jinn riding in her backseat.

The next day brings her to Kurt’s office, where she confesses that she’s hallucinating and wants him to do something about it. The biggest takeaway, though? He realizes that his patient, Sheryl, is her mom, and that she’s been lying to him about it. (Up note, however: By the end of the hour, Sheryl has apologized to Kristen, and because she’s broken up with Leland, there seems to be a tenuous truce there.) Oh, and eventually, Kurt tells Sheryl he can’t be her doctor anymore, but when she sobs and literally clings to his leg, he tells her he’ll help her find another therapist. 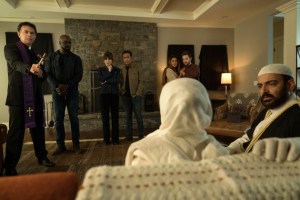 TOO HOT, HOT DAMN | Back to Mathilda, who is now being attended to by both an imam (thanks to her Muslim foster mother, who happens to be played by The Exorcist‘s Zuleikha Robinson) and a priest (played by Broadway vet Brian Stokes Mitchell). Men of faith, let’s… get… ready… to… rumble! They clash a little, but David suggests that they all work together. “There’s nothing of either faith that prevents both of you from doing your jobs, for the sake of Mathilda,” he points out.

Mathilda writhes, screams, cries — the usual demonic stuff — and then starts talking to Kristen in a scary voice. “I’m coming for you,” she says. “The father below will embrace you in his warm hellfire.” This bothers Kristen, who runs out of the room. When everything is done, it seems like maybe the girl will be OK?

Back at Kristen’s place, she realizes that the girls’ tea set she’d thrown out, which was exactly like one in Mathilda’s room, is back in its usual spot in their room. And when the girls are asleep, she puts on another slinky little number, chugs a margarita-in-a-can, practices her come-hither look in the mirror and slaps on some lip gloss. She’s about to leave when she sees the flaming jinn outside, which terrifies her. So she takes one of the pills Kurt prescribed and lays down on her bed, tormented.

At Mathilda’s house, the girl sits outside and stares at a bag of garbage, which suddenly begins to flame.