Well-played, Daryl. Well-played. Though Sunday’s episode of The Walking Dead teed up the ultimate lovers’ spat between him and Leah, who — surprise, surprise — turned out to be a Reaper, he emerged no worse for wear. But how long could he stay that way, what with her commander being battier than a cave? Read on, and we’ll unpack all of the heavy baggage that was stowed away in “Rendition.”

‘GOD IS HERE… HE’S ANGRY… I’M ANGRY’ | As the hour began, Daryl and Dog fled from the Reapers’ attack that was cued up by “Acheron, Part II” (read the full recap here). But, as will happen, they were followed by one of the villains — one who was soon revealed to be… ta-da! Leah! (Thanks for the hint, Norman Reedus.) Since last they’d seen one another, she’d gotten very blonde and very bitter. She even hinted that now Dog preferred her to Daryl. And “I always thought he liked you better,” she deadpanned (emphasis on the “dead”). In no time, Daryl was surrounded by Reapers and dragged to Meridian, where alone with Leah, he insisted that he didn’t know Maggie & Co. His family, he lied, had picked the wrong fight with the wrong people a long time ago. Before he knew it, he was undergoing water torture… up to a point. Leah, still clearly smitten, put a stop to it and warned that if he didn’t spill the tea on the group with whom he’d been traveling, “the one we answer to won’t be so nice.”

Again, Daryl insisted that he didn’t know those people, he’d just traded with them for food. Yeah, right, Leah basically replied. So he was dragged through an unnaturally tidy prison to a cell across from — well, hey there — Maggie’s pal, Frost. “Just ’cause we shared a bag of grain doesn’t mean I give a s—t about you,” Daryl huffed. And quickly enough, Frost understood the show that Daryl was putting on. When Leah visited Daryl, he told her to “just give me Dog, let me go, and you’ll never see me again.” In response, she asked, “Is that what you want?” (Thirsty much?) Before he could answer, they were interrupted: Two of the Reapers had been found dead, a twist that resulted in a preacherman basically speaking in tongues over one of the bodies and Reaper leader Pope (Happy! alum Ritchie Coster in fine form) expressing his outrage like a latter-day Jim Jones. 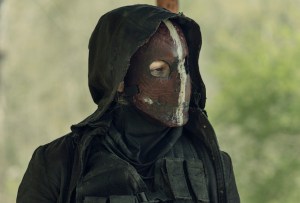 ‘GOD CHOSE YOU TONIGHT’ | When Leah next visited Daryl, she revealed that one of the dead — Turner — had been like a little brother to her. They’d been soldiers together first, then mercenaries. Daryl was all like, “You didn’t tell me you were a mercenary.” It was the “same job,” she said, “but we could pay our bills.” Soon, talk turned back to Daryl and Leah’s relationship, with him reiterating that he came back for her, only to find her gone. “We wouldn’t have worked, anyway,” she sighed. “Not in a world like this.” Nevertheless, she still cared for him and wanted to save him, so she beseeched him to tell her something she could take back to Pope. “There’s a woman. She’s the leader,” Daryl said, and “a tall, skinny guy who never shuts up… and a priest who carries a shotgun.” Wait, replied Leah, “that’s their leadership?” Daryl knew it didn’t sound impressive, but he’d been counting Reapers, he admitted. And these people… they greatly outnumbered the Reapers.

Later, after Leah pleaded Daryl’s case to Pope — and reaffirmed her dedication to the Reapers — her ex was taken to a (I wanna say) barn for a meeting with the big kahuna. But no sooner had Leah told Daryl to follow her lead with Pope than the two of them found themselves locked in… and the place set on fire! Once Daryl had broken them out, Leah joined the Reapers waiting at a safe distance outside. “Forged by fire… ordained by God… ” Pope intoned. “Welcome him.” And just like that, Daryl was a Reaper. (Well, at least in their minds; his face wore an altogether appropriate “WTF?” expression.) Finally, alone with Pope, Daryl was asked if he believed in God. “Not anymore,” he admitted. “Guess I just believe in me now.” That, said the religious nut, is a mistake, because “you’re not Him.” With that, Pope explained how after the fall, he and his men had been spared from the bombing and the burning all around them by hiding in a church. “That’s when I knew,” he said. “We were the chosen ones.” Oh, jeez. 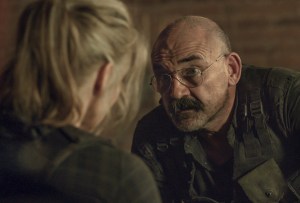 ‘ARE… YOU… HUNGRY?’ | Later, around the campfire, Pope marveled at the heroism of the Reaper who’d carried Turner’s body 10 miles to assure that he’d get a proper burial. He also wondered about where the guy had been when Turner was getting attacked. Uh-oh. Everyone saw how far Daryl would go to save Leah from the fire. How far had this guy gone to protect Turner? Not far enough, apparently. Before he knew what hit him, the fella was face down in the flames, Pope explaining that “God doesn’t only use fire as his baptism, it’s also his wrath.” So yeah… welcome to the Reapers, Daryl; good luck with that. So, what did you think of “Rendition”? Daryl and Leah’s reunion? Big, bad Pope? Hit the comments.