As if it wasn’t bad enough that Sunday’s claustrophobic Walking Dead brought back memories of rush hour on the subway, it also stuck a fork in not one but two characters — one of whose name we only recently remembered and the other of whose we just found out. So yeah, OK, maybe our investment in them was on the low side. The episode still managed to bring to a head — and at least for the moment resolve — the tensions simmering between Negan and Maggie (who, let’s be real, nobody really thought was going to die). How? Read on…

‘I HAVE BEEN A GOLDEN GODDAMN ASSET FOR EVERY SINGLE ONE OF YOU’ | As “Acheron: Part 2” began, Maggie’s cohorts dropped through the roof of a subway car and started wondering where she was. “She was right behind me,” said Negan, doing his best to look innocent. In no time, Maggie was tapping out SOS in Morse code from beneath the car. Once she’d been let inside, she clocked Negan with a pistol and revealed, “I slipped. He saw, and he left me to die.” His response: “OK, so what?” He hadn’t tried to kill her, he simply hadn’t helped when she’d needed a hand. “There is a big difference,” he noted. (Foreshadowing!) As Maggie’s pals volunteered to off Negan for her, they were distracted by Gage calling out from the other side of a connecting door. He’d gotten separated from Roy and now, you know, wanted in. But, since he hadn’t closed the door at the other end of the car, Maggie wouldn’t allow the door between them to be pried open. They didn’t have the ammo to handle all of the walkers that he’d let in. Horrified, Alden tried to intervene, but Maggie put down her foot, leaving Gage to stab himself so as to diminish the pain of being ripped to pieces by walkers. (Honestly, a pretty good, substantial death for such a minor character, no?) 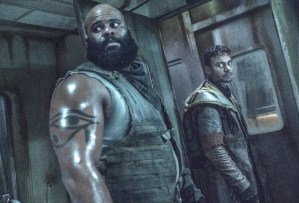 Later, as Alden accused his companions of not wanting to look at Gage’s reanimated corpse in the door’s window, Maggie coolly retorted that there were worse ways to die. To illustrate her point, she told the story of the frail old man she’d encountered before meeting Elijah, Cole & Co. The geezer had intended to kidnap her and do what he had with several other women: cut off her arms and legs, remove her vocal cords and use her as a sex slave. One such woman, Maggie had found walkerfied and pregnant. Three others, she’d found still alive, if you could call it that. When she saw them, her first thought was that “there must be food here,” she said. “I don’t feel anything when I tell you that. Do you understand me?… Seeing it, I lost something, and I don’t think it’s a bad thing that I did, because it has made things so much clearer.” With that, she and Negan appeared to reach some sort of understanding, however tenuous it might be. While all of that was going on, Daryl chased Dog through the bowels of the subway, eventually happening upon Roy looking significantly worse for wear. “Tell my kids I didn’t die a coward,” he begged Daryl. Roy had kids? Who knew? 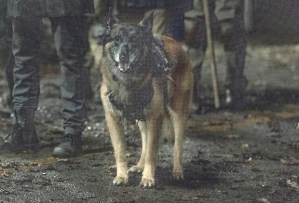 ‘YOU WANT TO SPEAK TO MY SUPERVISOR?’ | Later, as Team Maggie tried to bash its way into a blocked subway car, Gage and his fellow walkers broke through the door. Luckily, by then, Daryl and Dog had somehow reached the same location. So he cleared the car into which Maggie was trying to get — even as she trusted Negan with a gun — then stuffed a grenade in a walker’s mouth to really finish the job. Once the group made it out of the subway, Maggie announced that they’d be taking a detour to one of Georgie’s hidden supply depots in Arbor Hills. As Negan led the way… hey, how is Roy there? I could’ve sworn he was a goner back in the subway. Anyway, Roy was still alive when the gang came upon a bunch of bodies hung upside down by their feet. “This place sure has gone to s—t since the last time I was here,” cracked Negan. And just like that, Roy took an arrow to the head, and Cole took one to the leg. It was the Reapers wearing their best Purge masks and attacking en masse. Meanwhile, back at the Commonwealth detention center… 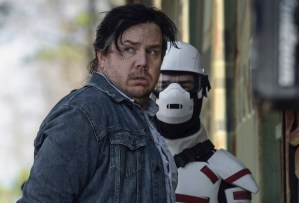 While Eugene freaked out about Ezekiel’s absence — our resident genius figured the erstwhile king had been taken for telling off Mercer — Yumiko deduced that there were rules at play, laws, structure. As such, she felt confident in demanding to speak with a guard’s supervisor, a gambit that miraculously worked. Taken back to the bureaucrats’ office, Yumiko impressed the hell out of them by accurately assessing everything from their former careers to the Commonwealth’s use of American currency “as a powerful psychological tactic.” She even got a cup of coffee from Mercer — big progress — and asked for expedited processing for herself and her friends so that they could hurry up and find her brother, a Commonwealth resident and thoracic surgeon. While all of this was going on, Eugene continued to freak out — now not only over Ezekiel’s disappearance but Yumiko and Princess’. When finally he was questioned anew by Mercer, he blurted out that he’d lied to get his friends to the train station — his only interest in going was in meeting Stephanie and possibly getting his V card punched. “Thank you,” he added, “for holding back your titters.” 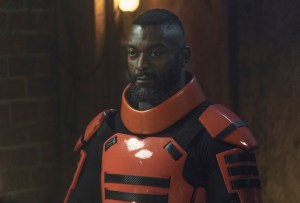 ‘WELCOME TO THE COMMONWEALTH’ | As the episode neared its conclusion, Mercer, satisfied that he now had the whole truth from Eugene, reunited him with his pals. (Ezekiel, it turned out, had been taken to the infirmary for his “cough.”) What’s more, they had completed their initial assessment and were being escorted to orientation “by a beat cop,” Mercer said to Ezekiel, recalling the king’s earlier diss and adding, “I went to West Point, a—hole.” Before they left, in came a pretty young woman who asked for Eugene. “Hi,” she said. “I’m Stephanie.” Hmm… if I’m not mistaken, that was Chelle Ramos playing her. So maybe Margot Bingham won’t be Stephanie after all? Is this a fake Stephanie? Drop your hunches in the comments below. Also, click here to see what Jeffrey Dean Morgan has to say about Negan’s deadly gamble and the chaos to come.