Warning: The following contains spoilers for Sunday’s The Walking Dead. If you’d rather watch first, read later, treat this interview like Negan might a sentence without an expletive and skip it.

The Walking Dead unpacked not one but two shockers in Sunday’s “Acheron, Part 2” (recapped in full here): First, Maggie allowed Negan to live even after he ignored her cry for help and let her fall into the open arms of a pack of walkers. Then, her recollection of her cold response to a house of horrors led to… well… as Jeffrey Dean Morgan puts it, “a little glimpse of understanding” between them.

It won’t be the last, either. “There are going to be moments where they’ll have revelations about one another and maybe understand a little more about each other,” says the actor. “They both know what it takes to survive and that bad things have to be done. But it won’t take away what she feels about Glenn’s death. 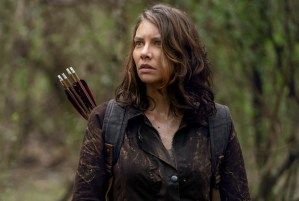 “When it comes down to it, I killed her husband in front of her in a very brutal fashion,” he adds in character. “Will she forget that? Will she forgive that? No. I’ve never believed that. But in this apocalyptic world where you have to rely on those around you to survive, they may need one another.”

Sooner than later, as a matter of fact. Since Sunday’s episode concluded with the duo and their crew under attack from the merciless Reapers — remember them? — “it’s about to get a lot f–king crazier for these two!” says Morgan. “It’s quite a journey they’re on.”