The family reunion that happens at the end of See‘s Season 2 premiere is a long time in the making, but it’s far from jubiliant: Let’s just say that no one is having shirts printed up to commemorate Voss Fest 2021.

The Apple TV+ drama, which returned Friday, finds Baba Voss and his family separated and struggling to survive. At the start of the episode, Baba kills some fighters and steals some of their armor, which will aid him in infiltrating the city of Trivantes and rescuing Haniwa, who’s being held prisoner there. 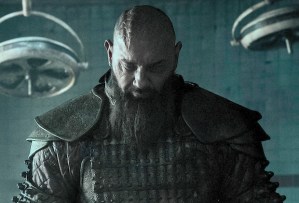 Baba manages to enter the city, then skulks around an ironworks until he discerns a path that might lead him to Haniwa. At one point, he literally drags himself through a tunnel of hot coals… only to realize that he’s been led straight into a trap.

Baba fights his way out and nearly escapes Trivantes, but Edo’s men grab him at the last moment. The brothers come face to face after Baba has been chained up and tossed in a dungeon. Baba begs for mercy, but Edo is stuck on the fact that Baba killed their father. “I remember when I prayed for just a hint of compassion from you,” he muses, causing Baba to say he’s spent his whole life regretting what he did to Edo. “Don’t worry, we’ll have plenty of time to catch up,” Edo replies. Then he proceeds to have Baba whipped.

Meanwhile, out in the forest, some soldiers find Kofun and Paris and order the pair to accompany them. In the resulting scuffle, Kofun and Paris learn that Maghra is alive, which brings them great joy. Kofun goes with the soldiers; Paris stays in the wilderness to await Baba (and, hopefully, Haniwa).

Elsewhere, Maghra and her sister, Queen Kane, and their army arrive in the city of Pennsa. A man named Lord Harlan (Sleepy Hollow‘s Tom Mison — go here to see what he has to say about the role) has been running the place while they’ve been gone; the queen quickly lets him know that she’ll do the ruling around here, thank you very much. She even commandeers his house! 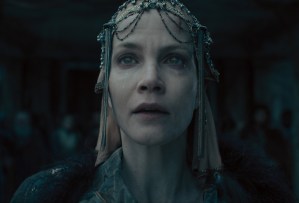 Everyone thinks that Queen Kane and her people were the victim of a genocide, and she plays coy about the group that allegedly attacked them and destroyed the dam. Harlan knows something’s up; as he subtly flirts with Magrha, he asks questions about the sisters’ path to Pennsa. But she doesn’t tell him much, and ultimately, it doesn’t matter anyway: The queen holds a public gathering to announce that the Trevantian army destroyed Kanzua because she’s pregnant with a sighted baby. She also lets everyone know that Pennsa is the new capital of Payan, and that she’s going to create a community where both sighted and unsighted people will “live together in harmony, under my rule,” which causes Harlan to mutter, “F–k.”