See‘s Baba Voss may have honed his remaining senses to preternatural levels, but even he won’t be ready for what’s coming for him in Season 2.

As if fighting blind — literally! — in a dystopian future weren’t tough enough, the drama’s sophomore run will pit Jason Momoa’s character against a cagey politician named Lord Harlan. The power-hungry court climber, played by Sleepy Hollow alum Tom Mison, will “screw everything up for everyone,” a jovial Mison tells TVLine. And, “I’m nothing if not gauche, so I was more than happy.”

For the uninitiated: The Apple TV+ series is set 400 years in the future, after a virus has wiped out the sight of nearly all of humanity. As we rejoin the action in Season 2, Momoa’s Baba Voss struggles to reunite with his family members as war looms. But his estranged brother Edo (played by former WWE wrestler/Guardians of the Galaxy star Dave Bautista), will do whatever he can to ensure that reunion doesn’t happen.

Ahead of See‘s Season 2 premiere on Friday, Aug. 27, we chatted with Mison — whose recent TV credits include Watchmen and Four Weddings and a Funeral — about what to expect from the enigmatic Lord Harlan. And we kicked off the conversation by inadvertently insulting him. Good times!

TVLINE | You were a Game of Thrones viewer, correct?
Yes. That’s right.

TVLINE | Lord Harlan strikes me as a Littlefinger-style character, at least in the beginning of the season. Would you say that’s an accurate read?
It’s funny you say that, because when I was offered the part, I was talking to Jonathan Tropper, the showrunner. And he said, “You know, there’s only one reason you got the part.” I said, “Right. Brace yourself. What is it?” He said, “You were the only one who didn’t play Littlefinger [at the audition].” [Laughs] So, I’m pleased that you say I was very Littlefinger. I have completely failed. 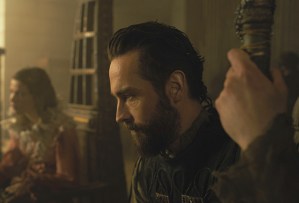 TVLINE | [Laughs] No! I mean that he’s just very sneaky and conniving about how he amasses power.
I think you’re completely right, because what he does and what he says is very scheming and Littlefinger-ish, but the important side to him is that, ideally, the audience shouldn’t know whether he’s a goodie or a baddie.

At the beginning, when you see him, he’s confronted by the possibility of losing his city to a maniac queen who destroyed her city and now wants mine, so you know, he’s on the back foot. He’s got to be thinking fast. There’s only one way to deal with her, and that’s by being as conniving as she is. I think as the series goes on, you see so many other both brighter sides and much, much darker sides to him, and I think it’s a nice balance. But yes, I love that you said Littlefinger. We’ve probably spoken before about how I like finding what isn’t on the page. Hopefully, I found a bit more of that.

TVLINE | I’ve seen the first three episodes of Season 2, and Harlan doesn’t do any physical fighting in them. Do you have any fight choreography coming up?
Yes. There is a little. You’re right: He’s not naturally a fighter, and that was one of the nice, the new things, about this season is you start to be introduced to this world’s urban side.

In the last season it was all out in the beautiful mountains and forests, whereas now the Alkenny tribe and [Baba] and Hera have to venture into the towns, so you’re going to get a completely different feel and it’s not the instinctive turn to physical. It’s much more dangerous in terms of politics, and that’s the main drive of Harlan. Yes, when push comes to shove there will be a bit of fighting a bit later, but I won’t say any more than that.

TVLINE | You work in a medium where eye contact is the norm, but you can’t do that here. Does it take real work not to directly look at someone during a scene?
It’s funny, I was talking to one of the guys on set last week who said he feels really rude to the other actors, because if you’re a generous actor, you like to work with the other actors, which includes, occasionally, looking at them. [Laughs]

There are so many hurdles to overcome in terms of that. Someone calls your name, and if you are a sighted person, then you turn and you look at them. But if you’re a person without sight, you turn the other way, so that your ear is towards them. We’ve got a really, really brilliant producer, Joe Strechay, who is on set the whole time. He’s blind, and he is our guide. So he has his team of movement people and they’re behind the monitor, and the movement people are looking out for all of the little giveaways that people who are blind wouldn’t do.

The hardest one for me, I gesture with my hands a lot, and I like doing that when I’m acting, as well. I think you can give a lot away. People say eyes are the windows to the soul, but I’ve always thought hands are. Hands give away a lot, but in a world where no one can see your gestures, gestures become meaningless. After 400 years of a world without sight, you just wouldn’t gesture, and that include nodding your head and shaking your head, and that’s the hardest thing to try and stop.

Oh my god, I get the s–t kicked out of me constantly for nodding and gesturing and all the rest of it, but it’s really important to all of us. It’s the nice thing about this cast is that we all want to do right by, not only by Joe, but just a group of people who aren’t represented on screen. We associate screen with being a visual medium, but there is an audience without sight, and we want to do right by them. So yeah: No nodding, no stupid hand work from Tom, and yeah, no looking at the other actors. 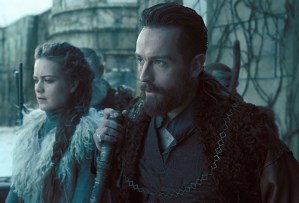 TVLINE | In the first three episodes, we learn that Harlan and Maghra have a history. How aware is Harlan of Baba Voss?
They’ve never met… When they meet. and he realizes that Baba is huge — and it’s no spoiler — but that’s, for me, been the most satisfying thing of the job: How can Harlan wind Baba up to the point where all Baba wants to do is smash his face in, but knows that he can’t because he’s in Harlan’s town, and Harlan and Maghra have a plan? So, that’s been constant fun for me and having someone as playful as Jason has been even better, that I just want to wind him up. That’s all Harlan wants to do, and it’s all Tom wants to do, as well. And I’ll tell you, in my long illustrious career, there’s been very little as satisfying as ruining Jason Momoa’s shots by making him giggle.

TVLINE | You and I have had many conversations about this subject before. I realize it’s a little bit of a trigger for you, so I’m just going to put it out there: Talk to me about the hair situation at the back of Harlan’s head. I do not understand it. Is it braids? Dreads? I understand if this is too much for you, because on Sleepy Hollow, Ichabod’s hair was a thing.
[Laughs] Listen, I can tell you what it is, but I can’t help you understand it because I’m a bit [confused] it, as well. But I’ve had much worse hair. We’ve all seen it. It’s some kind of weird rattail. Some weird, braided rattail with, I think there’s a cow in it, a little metal cow head. There’s a couple of horns in there and some gems and jewels. One of the things that Joe had discussed with the hair and the costume department is how [having] something that you can fiddle with, and actually touch, becomes such an important thing. Quite why there’s something for me to touch on the back of my head in some weird little rattail, I don’t know, but I didn’t argue when he put it on on the first day of filming. In retrospect, maybe I should have. Now that you bring it up with such disdain.

TVLINE | There’s no disdain!
Well, it hasn’t aired yet, so maybe Apple’s massive checkbook could be spent to color it out in post. Maybe they could CGI out a rattail, at your insistence. 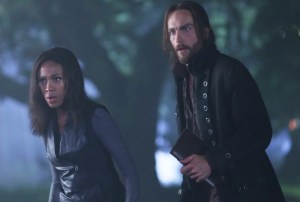 TVLINE | Remember when you cut your hair between seasons of Sleepy Hollow?
It was too much. An hour-and-a-half of having that wig put on, and in Atlanta in 90 percent humidity, running around the woods…

TVLINE | It’s not like you were wearing a heavy woolen coat or anything like that while you were doing it.
[Laughs] No, or big boots! Before we moved from North Carolina to Atlanta, I bumped into David Morrissey, who had been there for The Walking Dead, and I said, “Oh, I’m moving to your neck of the woods.” And the first question he asked was, “What’s your costume?” And I said, “Well, I’ve got a wig, and a wool coat and boots.” And he just looked at me and went, “You’re f–ked.” [Laughs]

TVLINE | It’s not like Wilmington was a temperate paradise. It was also humid there.
I remember after one night shoot, I took off my wig. It had been quite uncomfortable. I didn’t know why it was hurting so much. I took off my wig, and there were six massive mosquitos that had somehow gotten in my wig and had just been feasting. They were fat and drunk on my scalp.

TVLINE | That is horrifying.
It was horrible. So yes, I needed it cut. And someone said, “You do know that there is a general rule that if a lead character changes their appearance, chances are the show will be canceled the following season, because the audience won’t like it?” And I think that was them trying to put me off, but I went for it. I then regretted it, because actually, my shorter hair was worse than the wig.

TVLINE | Shorter hair is definitely harder to maintain than longer hair.
Oh, I know. I should have long hair and a beard at all times. I’ve been told several times.