In the exclusive Season 5 poster embedded below, Matt Czuchry’s Conrad Hawkins appears alone in an operating room, back turned toward us, alongside the tagline, “Healing starts within.”

The image is a solemn contrast with the last time we saw Conrad in the Season 4 finale, when he and wife Nic welcomed a healthy baby girl. “Have you ever seen anything so beautiful in your life?” Nic asked Conrad as they watched their daughter sleep. “Yes,” he replied, looking at Nic.

But according to the Season 5 logline, the stakes will once again become high for Chastain Park’s team of doctors, who will “continue to save patients and fight corruption in the healthcare system through their alliance with Big Pharma — the partners that helped them find a cure for sickle cell disease last season.” As the new episodes unfold, “old relationships will be tested, new ones formed, and the emergence of a widespread Medicare fraud scheme ensures Chastain will never be the same.”

“When our audience — our loyal and beloved audience — tunes in for the first episode of Season 5, by the time it’s over, they will be shocked at certain changes that are taking place at the hospital,” co-showrunner Peter Elkoff previously teased to TVLine. “That’s all I’m going to say.”

And some significant changes have already come to the hospital: In the wake of Shaunette Renée Wilson’s Season 4 departure as Mina Okafor, Anuja Joshi (who plays surgical intern Leela Devi) has been upped to series regular, while Morris Chestnut (aka villainous neurosurgeon Barrett Cain) will appear much less in Season 5 after joining the upcoming Fox drama Our Kind of People.

The Resident returns Tuesday, Sept. 21, at 8/7c (see Fox’s full fall schedule here). Scroll down to view the Season 5 key art, then let us know what you make of it in the comments! 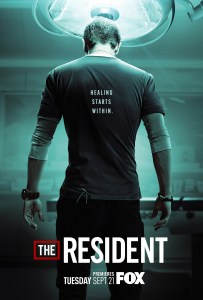