The following post contains spoilers for The Resident‘s Season 4 finale.

If you watched Tuesday’s season finale of The Resident without knowing the show had already been renewed for Season 5, we wouldn’t blame you for thinking a series finale was playing out on your TV screen.

After all, the emotional episode brought several storylines to optimistic conclusions: AJ and Dr. Cain seemed to call a truce on their season-long conflict after Cain performed life-saving surgery on AJ’s mother. Jake and his husband, Gregg, formally adopted precious Sammie. And after a stressful pregnancy, Nic successfully gave birth to her and Conrad’s first child, a daughter named Georgiana Grace Hawkins (aka Gigi) for Nic and Conrad’s late mothers. In fact, the finale even wrapped with a sweet montage of Conrad and Nic’s previous relationship milestones. “Have you ever seen anything so beautiful in your life?” Nic asked Conrad as they watched their daughter sleep. “Yes,” he replied, looking at Nic. (Sniff!)

But despite the heartwarming ending and tied-up plot threads, co-showrunner Peter Elkoff says the episode was not written as a series finale, even though The Resident‘s Season 5 pickup wasn’t made official until earlier this week.

“We had a pretty good sense that we were getting picked up,” Elkoff tells TVLine. “[Conrad and Nic] had come to this really important place, this big moment in their relationship, and we wanted to up the emotion with some images from other high points in their love story. It was purely to say, ‘Hey, these two have come so far, and Nic’s been through so much this season.’ We wanted to show those steps along the way.” 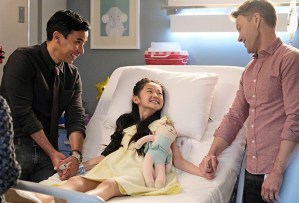 To that end, The Resident‘s writers also skipped over an arduous labor scene for Nic, instead opting to open the finale with baby Gigi already born. “It just felt like, you know what? She’s gone through so much. We’re just not going to do that,” Elkoff continues. “We just wanted to give them a happy moment when they got to see that baby… We weren’t going to put any obstacles in their way.”

Elkoff also weighed in on other aspects of Tuesday’s finale, then teased a Season 5 development that the EP says will leave fans stunned. Read on for his insights:

TVLINE | I admit I was surprised to see Dr. Austin and Dr. Cain come to an understanding in this finale, after being adversaries for so long. Why did this feel like the best ending to that storyline?
We wanted to give Cain a redemption arc, but we didn’t want to turn him into a total softie. He learned a lot of lessons, and he has that conversation with Billie in the episode where he says, “I’m never going to do anything that helps me but hurts my patient again.” He also says, “I might go to Johns Hopkins, ‘cause it’s more money!” [Laughs] He’s still Cain. We just really wanted to make sure we kept some of his ornery selfishness. But like you said, you were surprised by it, and that’s what we wanted to do. To me, it’s one of the big emotional spines of the season. We started them in conflict from 4×01, and we escalated it with Mina leaving, but we wanted to bring it to an unexpected, emotional ending — a “maybe we’ll be OK, maybe we won’t” moment.

TVLINE | The news broke earlier this week that Morris Chestnut has been cast on Our Kind of People. Can you confirm the plan is to keep him on in a recurring capacity?
That’s what we’re planning, but it’s impossible to say, given how schedules shift and change. But yes, he will recur. I just can’t be specific about how often.

TVLINE | And looking ahead for AJ in Season 5, do you and the writers even have interest in exploring his love life again, given how important Mina was to him?
I think so. I think we’ll get to that. It might not be right at the top of the season, but I think we’ll get there in the fifth season. That’s all I’m going to say. [Laughs] 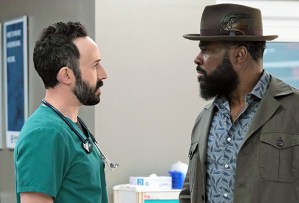 TVLINE | You spent less time focusing on villains of the health care system this season than you normally do. Now that the finale has introduced a Big Pharma storyline, should we expect that to be a central Big Bad in Season 5?
The ramifications of that [Big Pharma plot] will be evident in the season, and we will do — because we have 23 episodes, it’s going to be a ginormous season — we will do one of those underside-of-the-medical-industrial-complex arcs in this season. I won’t be specific as to whether it’ll tie into the Big Pharma story or something else, but yes, we will return again to a villain in our next season.

TVLINE | Is there anything else you can tease about Season 5 — perhaps even a storyline we didn’t see introduced in Season 4?
Well, here’s all I will say, because I can’t give away any more: When our audience — our loyal and beloved audience — tunes in for the first episode of Season 5, by the time it’s over, they will be shocked at certain changes that are taking place at the hospital. That’s all I’m going to say. [Laughs]

We’re really proud of the season, and the actors were really happy with it. As you’ve alluded to, we didn’t want to have a big villain; we were going to celebrate doctors as heroes [amid the real-life pandemic]. We wanted to tell a finale that was really big on emotion and evolution for a lot of our characters’ stories. We wanted to give them positive, pretty much happy endings — or relief, at least, from some things they were fearful of. Going into Season 5, we’re going to go back to, I guess you could say, a traditional Resident season, the way we’ve told stories in three of the four seasons that have aired. This was a specific kind of season because of the pandemic.

With that, I turn it over to you. What did you think of The Resident‘s Season 4 finale? Grade it in our poll below, then drop a comment with your full thoughts.