Expect to see much more of Dr. Leela Devi when The Resident returns: Anuja Joshi, who debuted as the surgical intern during Season 4, has been promoted to series-regular status for the show’s fifth season, per Deadline.

Joshi first appeared on the Fox medical drama about halfway through its fourth season, with Leela quickly establishing herself as an impressive doctor while quietly struggling with dyslexia. Throughout Season 4, she ultimately earned AJ’s respect in the operating room and formed a strong bond with Devon, the latter of whom she kissed (and probably more!) in the May 18 finale. 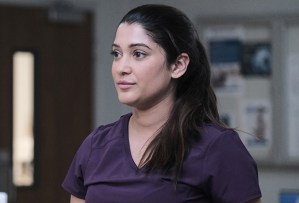 As co-showrunner Peter Elkoff recently divulged to TVLine, Leela and Devon’s spontaneous hookup will prompt “a big story in Season 5,” and the encounter “won’t be something that happens and is somehow forgotten” between the docs. And in the wake of Shaunette Renée Wilson’s exit during Season 4, EP Andrew Chapman previously confirmed that both Joshi and series regular Jessica Lucas (as Billie Sutton) would have more prominent roles moving forward.

“[Leela embodies] a core idea of what the show is,” Chapman told us. “It’s about learning how to be a doctor, learning how the system can screw you up… And yet, as a character, she’s so stubborn and ambitious, and she will not be knocked down.”

But The Resident‘s fifth season — airing this fall in its usual Tuesdays-at-8 time slot — will bring much less of another character: Morris Chestnut, who has played villainous neurosurgeon Barrett Cain since Season 3, will drop from series regular to recurring status in the new episodes, having been cast as the male lead in Fox’s upcoming family drama Our Kind of People.

“It’s impossible to say [when Chestnut will appear], given how schedules shift and change,” Elkoff shared in May. “But yes, he will recur. I just can’t be specific about how often.”

Excited to see more of Leela in Season 5? Tell us below!