Will Cruel Summer solve (or add to) the mystery? What “situation” looms for Dynasty‘s Cristal? Is NCIS: LA keeping more secrets about Callen? Will The Resident‘s kiss lead to more? Read on for answers to those questions plus teases from other shows. (Email any new Qs to InsideLine@tvline.com.)

On what date was Cruel Summer‘s Kate Wallis kidnapped? She is shown in every time period. For example, on her birthday of August 29, in 1993 she is with Jamie, in 1994 and 1995 she is with Mallory. But I thought she went missing in the summer of 1993. I am confused….  –Sandy59
Your confusion shouldn’t last too much linger, Sandy, as I am told that key details about Kate’s kidnapping will be revealed in the Tuesday, June 8 episode of the Freeform hit.

Can you tell us what’s in store for Cristal in Season 4 of Dynasty? –Edin
I am just a regular Joe, so I certainly cannot. But showrunner Josh Reims can! “Cristal has a rollercoaster ride of a season ahead of her,” the EP shares with Inside Line. “She and Blake have to figure out how to move forward in their marriage after both cheated; her brother Beto will pay a surprise visit, upending her life and bringing out the dark side of Cristal once more; and in her biggest challenge yet, she has to deal with a medical situation that becomes much worse than anyone expected….” 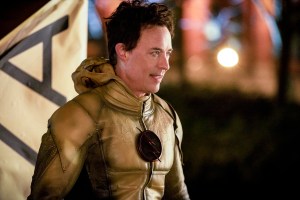 When will we see Tom Cavanagh on The Flash again ? –Max
Mum’s the word on the airdate of his final booked appearance, but beyond that, you can probably expect a final, final encore whenever the superhero series wraps. “I’m not saying that this is going to happen, but [Arrowverse EP] Greg [Berlanti] and I always felt that when Grant [Gustin] decides to depart the show, it’d be hard to imagine a scenario other than ‘Batman comes home to Joker,’ and Flash and Reverse Flash settle things,” the Wellses portrayer told me. “It’d be hard to imagine a different storyline — and that’s all I’m going to say right now.”

Any scoop on Carlos Valdes’ final episode of The Flash? — Greg
There is a really nice montage/trip down memory lane.

Do we know what #OneChicago is looking like for next season? As in the number of episodes, more frequent character crossovers, and a big crossover event? –Leia
This much we know: Chicago Fire is readying for two big events next season. “Hopefully, the second episode, like we’ve done in the past, will be a major crossover,” showrunner Derek Haas shares. “We’ve already started talking about ideas for it and to do one in the vein of ‘Infection,’ where it was three big episodes with all three shows represented in all three hours. That would be ideal. Hopefully, the pandemic will be closer to being under control by then, and we’ll have more people back and we can cross people over a bit more easily.” Additionally, Season 10’s fifth episode “is going to be our 200th episode,” Haas notes. “So we’re going to start and really build towards that episode and make that one special, too.” 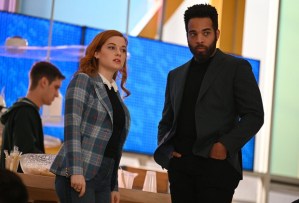 For Zoey’s Playlist, anything you can tease about Zoey and Simon’s relationship? –Stephanie
Although the pair broke up in the Season 2 finale, showrunner Austin Winsberg is hopeful that Zoey and Simon will be able to get back to a place of at least friendship (provided the NBC series is renewed, that is). “I really liked the idea that we explored in Season 2, that Max and Simon were not rivals for Zoey, and that they didn’t view Zoey as a prize, but that it was sort of up to her and her own choice, and that Max and Simon were able to be friendly with each other through that,” Winsberg says. “While it might be a little bit murky or messy in the beginning with Zoey and Simon trying to get back to a friends place, I like Max and Simon being friends, and I like Simon being in their world. And I don’t want to suddenly villainize Simon. Trying to get them back to a better place with each other is where I’d want to go.”

Do you have anything on the final episodes of The Bold Type? –Jessica
Kat and Adena’s spark is about to be reignited. “When we left them in Season 4, they had come to this great place of they loved and respected each other, they were very good friends, they worked together, and they were able to sort of keep it at that place,” showrunner Wendy Straker Hauser says. “So we’re playing with different kinds of love. We’re playing with their ability to do that and then, ultimately, the other component, which is that they’re madly in love with each and attracted to each other. What does that look like when you continue to also potentially break each other’s hearts along the way?” 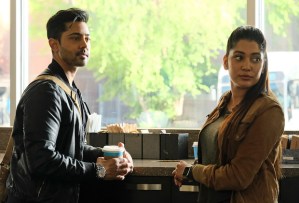 Any updates on The Resident? –Mary
Following Leela and Devon’s spontaneous hook-up in the Season 4 finale, co-showrunner Peter Elkoff promises “a big story in Season 5 that will come off that kiss.” The EP is hesitant to share more specifics, but “it won’t be something that happens and is somehow forgotten,” he assures, adding that the writers don’t have quite as fine a line to walk with Leela and Devon’s relationship as they did with Mina and then-mentor AJ. “[Leela] is really AJ’s intern; she just does rotations through the ER, and she and Devon cross on patients,” Elkoff explains. “So there’s not the same issue about it that there was with Mina and Raptor, in reality.”

Are there any plans for Crackle or Netflix to make a Season 4 of StartUp? I binged-watched all three seasons on Netflix and will be sorely disappointed if the series ends on the Season 3 cliffhanger.  –Melissa
So sorry, Melissa, but to quote The Princess Bride‘s Westley, “Get used to disappointment.” All sources assure me that StartUp will not be starting back up.

Callen was sifting through the filing cabinets in the NCIS: LA finale — do you have any info as to what that’s all about? –J.
Callen was, in effect, rummaging for a storyline seed that is poised to bloom next season. As showrunner Scott Gemmill explained to me, “With Hetty being gone, we started to think about Callen’s relationship with her as a child, and then because of Kilbride being somebody who has known Hetty for so long, it seemed like a great opportunity for us to explore something from Callen’s past that he didn’t know about.” Especially coming off of Kilbride’s semi-ominous crack that Hetty “brainwashed”/”created” Callen, “There might be a lot more story there than we realize.” 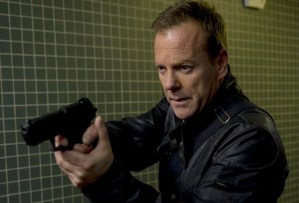 In January of 2020, Deadline reported that the showrunner for The Resident was attempting a new iteration of 24. Can you find out anything about that? –Rob
I asked around for you, and while there is no update of note, Todd Harthan’s take on the action franchise is still in development.

Any scoop on Lucifer Season 6? –Nilda
If — Episode 15/16 spoiler alert! — you were shocked to hear of where Dan is now, rest assured that his portrayer was, as well. “I was confused by that choice, honestly, but Dan is super confused by it,” Kevin Alejandro told me. As such, in the final season, “You get glimpses of Dan trying to figure out why his choices have led him to where he’s at. It’s not a huge part of the [season], but it’s honest and it’s actually quite beautiful, the way they’ve handled the Dan of it all.”

I follow a few of The Orville‘s cast members on Twitter/Instagram, but I am curious how the upcoming Season 3 is going. Are they still filming? –Larry
Believe you me, I check in with Hulu at least every two weeks on a premiere date, but I am told that production on Season 3 is still in progress.