Something magical (and longggg overdue) occurred on Hallmark Channel this Sunday night.

“If you’re not making history, you’re not doing it right,” Teresa, who plays Zoey, shared on Instagram. “Thank you to everyone to helped this story become a reality and to everyone who rallied for it until the very end and beyond. It means more to me than you’ll ever know.”

Good Witch‘s same-sex kiss marks a major step forward for Hallmark Channel parent company Crown Media Family Networks, which in December 2019 caved to pressure from conservative groups and pulled commercials that featured a kiss between two brides. Following a firestorm of controversy — the decision drew ire from Hallmark movie vets Hilarie Burton and Bridget Regan, along with other celebrities including Ellen DeGeneres — Crown Media reinstated the ads. At the time of the reversal, Hallmark Cards president and CEO Mike Perry called the initial choice to remove the ads “the wrong decision,” adding, “we are truly sorry for the hurt and disappointment this has caused.” (Soon after, Crown Media Family Networks CEO Bill Abbott left the company.)

Check out some of Twitter’s reactions to #TeamJoey’s kiss, tagging Barrell and Teresa and often coming from those who also enjoyed Barrell as half of the LGBTQ-progressive Syfy series Wynonna Earp‘s #WayHaught pairing:

Oh man! @KatBarrell and @KyanaTeresa you did it, you girls changed history for all queer people in this network now 🌈🌈🤯🥰 after this @hallmarkchannel will never be the same and thank God and YOU for that. It was about time #GoodWitch #GoodEarpers

We all just witnessed history on Hallmark. @hallmarkchannel please don’t stop the positive representation on screen. It can be life changing for so many. #GoodWitch #Goodies #GoodEarpers

Sunday’s farewell event saw Joy’s ex-girlfriend Charlotte arrive in Middleton, causing friction with new love interest Zoey. Worried that she was going to lose Joy, Zoey enlisted Sam for an impromptu salsa lesson, and surprised Joy when they returned home from Stephanie and Adam’s wedding. The couple shared a kiss, and all was forgiven. (For a complete recap, click here.)

While Joy was introduced during Good Witch‘s sixth season, Zoey was not added until early in Season 7, when the big-city firefighter moved to Middleton and fell for Cassie’s cousin. 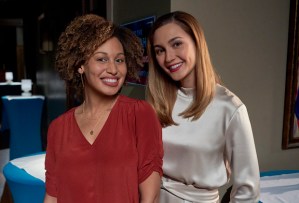 “There’s been so much support [for this relationship],” Teresa said in a July 23 interview with CheatSheet.com, noting that many Earpers followed Barrell over to Hallmark. “The fans are incredible. Naturally, there’s going to be a bit of friction and there are going to be people who are not on board. So having that support team behind you of people who are kind of going to rally for you and stick up for you, it’s a really good feeling.”

Teresa also hinted at Joy and Zoey’s kiss, adding: “I will say that fans should be very excited for this finale.” Meanwhile, in an Instagram post, she wrote, “Let’s give them something to remember us by.”