Calls to boycott Hallmark Channel have drawn the attention of the network’s past and present stars, including One Tree Hill vet Hilarie Burton.

Burton, who has previously headlined three Hallmark movies — Naughty or Nice (2012), Surprised by Love (2015) and Summer Villa (2016) — responded to the controversy surrounding the network’s decision to pull commercials that featured a same-sex wedding. In a Twitter thread on Sunday, the actress claimed that she’d been fired from a Hallmark movie earlier this year after she insisted on more diverse casting.

“Just going through some old emails from a #Hallmark job I was ‘let go’ from back in January,” she wrote. “I had insisted on a LGBTQ character, an interracial couple and diverse casting. I was polite, direct and professional. But after the execs gave their notes on the script and NONE of my requests were honored, I was told ‘take it or leave it.’

“I left it. And the paycheck,” Burton continued. “Sh—ty being penalized for standing up for inclusivity. I really wanted that job. It was close to my house. It paid really well. It was about the military, which you all know I hold dear. But… I’d walk away again in a heartbeat. The bigotry comes from the top and permeates the whole deal over there.” She then suggested that audiences could find more “inclusive Christmas magic” over on Lifetime, where she has starred in holiday films The Christmas Contract (2018) and A Christmas Wish (2019).

Meanwhile, Jane the Virgin‘s Bridget Regan, who has starred in Hallmark’s Christmas Getaway (2017) and Magic Stocking (2015), accused the network of “endorsing discrimination” by deciding against airing the aforementioned ads.

“Hey @hallmarkchannel, this is [incredibly] disappointing and disheartening,” she said. “I thought #Hallmark was all about spreading love — especially this time of year. Instead you are endorsing discrimination. It’s time to give respect to LGBTQ families and communities.” 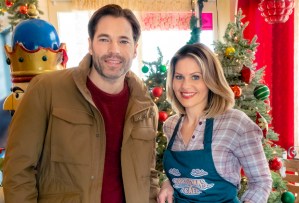 Wynonna Earp‘s Tim Rozon, who recently appeared opposite Candace Cameron Bure in the Dec. 1 movie Christmas Town, also responded to the network’s unfavorable decision. “Love is love ❤️,” he tweeted. Added Wynonna Earp creator Emily Andras, “A war on love is an actual war on Christmas, and everything Christ stood for. No more Hallmark in my house unless this bigoted policy is reversed.”

Comedian and talk-show host Ellen DeGeneres also weighed in on social media. “Isn’t it almost 2020?” she said. She then took aim at Hallmark Channel president and CEO Bill Abbott and asked, “What are you thinking? Please explain. We’re all ears.” He has yet to respond as of press time.

On Saturday, GLAAD put out the following statement:

Hallmark Channel’s decision to remove LGBTQ families in such a blatant way is discriminatory and especially hypocritical coming from a network that claims to present family programming and also recently stated they are ‘open’ to LGBTQ holiday movies. As so many other TV and cable networks showcase, LGBTQ families are part of family programming. Advertisers on The Hallmark Channel should see this news and question whether they want to be associated with a network that chooses to bow to fringe anti-LGBTQ activist groups.

Scroll down for additional reactions…

Love is l… oh wait not at @hallmarkchannel apparently

This is what happens when you focus all your energy on exclusion instead of clever plotlines. Call us, @Zola. We celebrate the holidays with everyone. https://t.co/YREKYbhgrv