Theaters are open! And yet… a good percentage of you still are enjoying first-run movies in the comfort of your own home, given the option. To that end, in what ways did you “upgrade” your TV viewing experience while shut in during the pandemic?

Because as noted above, though something as big and buzzy as Marvel’s Black Widow — the first MCU feature in two years — did get a theatrical release this month, it also could be streamed on Disney+ (with a Premier Access upcharge). And according to a TVLine poll, at least, a hair more than 50 percent of you watched Black Widow at home, versus at the Gigaplex.

Black Widow of course is but the latest feature film that was made available to stream on your TV, following in the footsteps of the live-action Mulan (which debuted on Disney+ with Premier Access), Borat Subsequent Moviefilm and Coming 2 America (on Amazon Prime), Godzilla vs. Kong and Wonder Woman 1984 (on HBO Max), Da 5 Bloods and Ma Rainey’s Black Bottom (on Netflix), Hamilton (on Disney+) and Nomadland (on Hulu), among others. 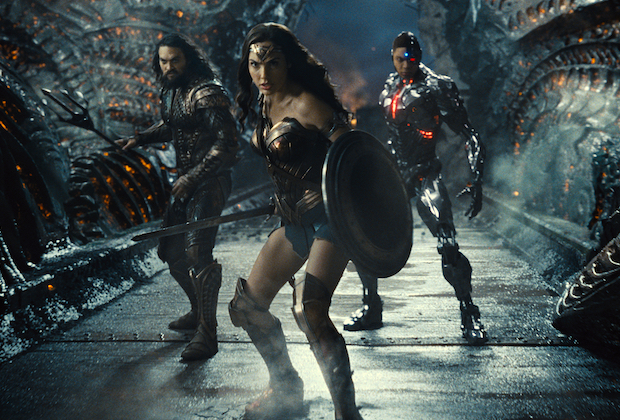 But during the pandemic’s early days, with theaters shuttered and you left with only your biggish screen to entertain you (and/or the rugrats), you may have realized that if your living room was to double as any sort of “home theater” for the time being, it could use some upgrades. Did you finally get that sound bar? Spring for a pleather couch with cup holders? Supersize your Sony? Or perhaps most important of all, did you start ordering movie-type candy in bulk from Amazon, for when you and or loved ones gather for a faint facsimile of a Movie Night?

Lastly, was there any particular new release to a streaming service (say, the action- and effects-heavy WW84 or #TheSnyderCut?) that nudged you to up your game?

Tell TVLine: How have you upgraded your TV-viewing experience during the 17 months since the pandemic forced us indoors? And did you do so swell a job, you’re frankly in no great rush to return to the sticky-floored movie house?