The Flash closed out Season 7 this Tuesday night with the threat of war, followed by a whole lotta love.

First up: After paying a visit inside the mind of August Heart, Barry realized that Godspeed was clamoring for organic speed — and his clones would not back down until Flash gave it to him. Refusing to cower to the demands, Barry teamed with Jay Garrick, daughter Nora, son Bart (jostled out of his coma by Speed Force Nora) and wife Iris (whose latent speedster ability was reactivated by Speed Force Nora), with Cisco/Mecha-Vibe and Frost offering backup, to battle the clones in a street fight. 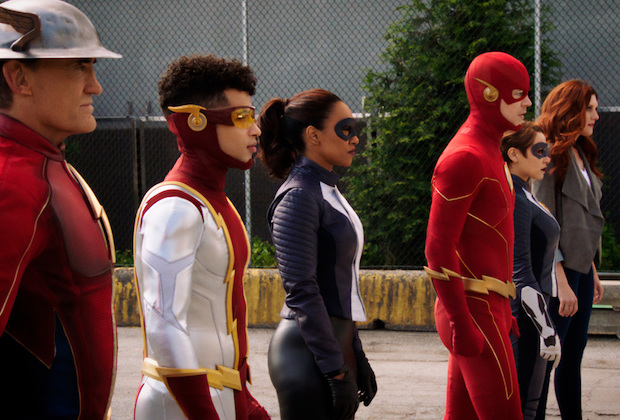 Alas, that assembly of heroes (and Noras!) was not enough to sideline the clones for good. Barry then attempted to do right by August and use his speed force connection to jump-start the biochemist’s memory. In doing so, though, Barry wound up fulfilling Heart’s destiny to be Godspeed, who then absorbed the powers of his clone army.

To help Barry best the sinister speedster, Speed Force Nora, with Iris serving as an anchor, tapped into the Negative Speed Force to recruit Eobard Thawne to join in the fight. Flash and Reverse-Flash teamed up against Godspeed in a lightning-sword fight, with Thawne eventually (but non-fatally!!!) running his blade through Barry’s new nemesis. Thawne then aimed to kill Barry himself, but realized that his arch enemy “got faster” and is now impervious, so he sped away (…for the time being). Afterward, Barry invited Iris to one-up their ersatz, hijacked-by-Olicity wedding by renewing their vows at Joe’s house, where son Bart crooned Jonah Muton’s “1949.” 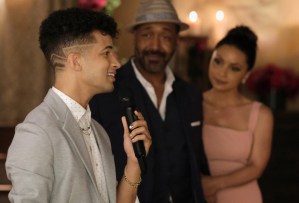 Elsewhere in the finale: Kristen Kramer (and a gobsmacked Joe) discovered that she is a meta with the ability to mimic the power of any nearby meta, and the vow renewal ceremony seemed to get Joe and Cecile in the mood for (finally!) making things official themselves.

What we didn’t get was any hint about what’s ahead. To that end, TVLine spoke with showrunner Eric Wallace about the wild, pandemic-altered season gone by, as well what’s on his “to do list” for Season 8 (premiering Tuesday, Nov. 16).

TVLINE | At the start of this season, we talked about the challenges that producing a TV show during the pandemic might face. What were some of the biggest nuts you ended up having to crack?
I’d say the reduced order [18 episodes] was probably the biggest challenge, because we had a much larger, more involved story to tell in Season 7 that we had to truncate down, essentially. And that was a result of having not just a shorter season because of COVID, but also the last three episodes of last year ended up being in this season. Suddenly we found ourselves having to do three things instead of two, which required a lot of story juggling. We got through it, but I’d say that was a pretty darn big challenge.

The other challenge was a mental one, for the cast and for the crew, making a television show in the middle of a global pandemic. I mean, I can’t undersell to folks how difficult it was, and what troupers our cast and crew, our writing staff and everybody have been when the world is going through something so intense. They rose up because they felt the need to entertain folks even more, but it comes with a toll. We were really at the end of our ropes at the end of Season 7 and in need of a break, which fortunately we got. 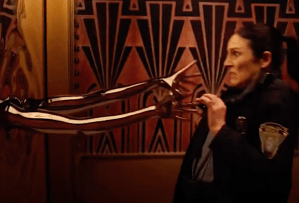 TVLINE | Going back to what you said about having to reshape storylines, if we looked hard enough, where would you say we could see the seams?
I hope you can’t see the seams. The first three episodes, which were the end of last season and ended the Mirrorverse story, were supposed to be bigger and wilder and much more insane. At the end of Episode 702, where there’s a mirror arm that comes out of an elevator and attacks [Officer] Korber, that was the first of what was going to be a whole wave of an invasion.

TVLINE | A “body snatchers” thing.
Yeah. When we first planned for that, there were no COVID protocols in place so you could have tons of extras and do all sorts of crazy things, and suddenly that became impossible, so we were like, “OK, we’ve got to tell the same story in a different way.” Oh, and we also had some cast issues, because of the mental challenge of [the pandemic]. It was definitely the most challenging season of television I have ever been through — and ever hope to go through. 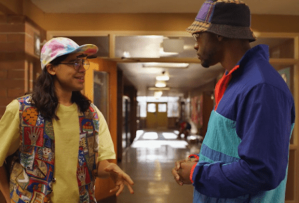 TVLINE | Yeah, I felt like you had to do some very careful “moving of chess pieces” with the cast. Like, we saw Iris disappear for a couple of weeks, Joe had a very distinct storyline with Kristen Kramer, Allegra had her own thing going on….
And that was all stuff that we kind of had to do because all of these things had been in place and planned for a much more leisurely pace where we could integrate things, and all of a sudden we didn’t have the time for it. What I really loved, though, was that it allowed some of the other side characters to shine for a full episode. I always use [Episode] 714 as a perfect example, allowing Chester and Allegra, especially Kayla Compton, to really shine in an episode. That’s something that would not have come up in the way it did had the season been in its original form. So, I do think there were some unexpected bonuses from the situation, and I was very happy with that.

Who's In? Who's Out? Fall TV Casting Moves!

The same thing with Chester going back to the ‘90s, which we had kind of already planned, but suddenly the way we had to shoot it — because you can’t have a school full of kids — we had to do so many wonderful, clever things. I have an indie film background, so I really dug into that and infected the rest of the cast and crew with the same what I call “indie fever.” We’re going to just take the bare-bones theme, the heart, the emotion of the story, and give that all the attention. Again, that episode came out delightful and the actors had such a fun time with it — Carlos [Valdes] and Brandon [McKnight], especially, because it allowed them to improv a bit, because we couldn’t have a whole bunch of action. It was wonderful, just wonderful. A lot of lemonade was made from the lemons.

TVLINE | Speaking of bodies on set — and this is a very nerdy, granular question: Watching the finale, at any given moment how many stunt guys were dressed as Godspeed clones? My guess is you in fact never had more than six.
Good guess! It was really funny — when we started the season, I said, “OK, we’re going to do this graphic novel, ‘The Godspeed imperative,’ with a Godspeed civil war,” and they were like, “Oh, so we’re going to have all these digital Godspeeds?” I said yeah, we’re going to have some, but how many practical Godspeeds can you give me beyond Karan [Oberoi], who is our main Godspeed, and his stunt double? Our costume designer, Kate Main, was like, “Eric, we don’t have much time here…,” and I said, “How many can you give me? Five, six? I’ll take it.”

I then had to turn to the directors and say, “Good news and bad news. We can’t do all the things we did in the past, but we do have six actual Godspeeds that you can position.” I actually stole this from George Lucas. There’s a very famous scene in The [Young] Indiana Jones Chronicles, I think it’s in the pilot, where they had one group of horsemen riding towards camera, and it was like 20 horses but they turned it into 60.  I told the crew that we’re going to take those six guys and put them everywhere, shoot these six people everywhere, to create this illusion — and it came out pretty awesome. I’m so proud of them. Our stunt guy Jon Kralt did the most amazing job with these six guys, especially with that lightning sword fight.

TVLINE | That was as interesting approach you took with that final fight between Flash, Reverse-Flash and Godspeed.
We were inspired by Joshua [Williamson]’s run in the current comic books. There’s a picture somewhere, I think it’s on a cover or inside, where Godspeed is holding his lightning sword. I looked at that and I went, “What happens if there’s three lightning swords, and they have a duel. And they can speed at the same time?” The minute I pitched that to everybody, you should’ve seen the looks on their faces! [Laughs] They were like, “Eric, you do realize we’re supposed to be doing less in the middle of a pandemic…?” I said that we owe the audience this, let’s give them what they deserve. And it inspired everybody. Our director, Marcus Stokes, laughs about it now, but there were times during filming where we were like, “Are we crazy?” 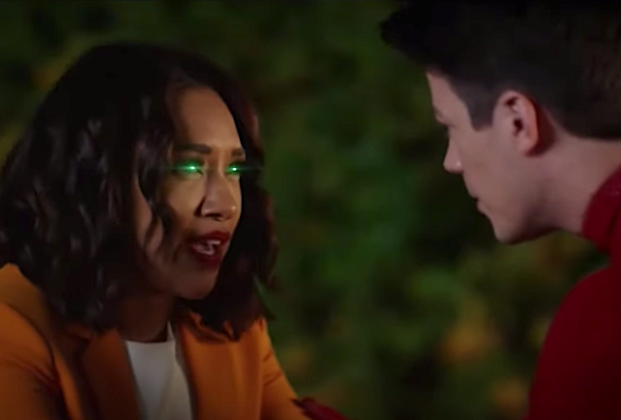 TVLINE | Coming out of that big fight and then Barry and Iris’ vow renewal, there was no usual tease for what the next season might be about. What’s on your Season 8 to-do list?
My Season 8 to-do list? Oh, gosh, that’s not a short answer. There are so many things. Barry and Iris are happier than ever, but also because they’re super happy, now they have to face the greatest challenge ever, because we have to resolve, “What’s up with her time sickness? What’s up with Dion? What’s up with those green eyes that we saw in Episode 16?” That’s a problem that’s still got to get solved, and you’ll never imagine where it goes. It’s going to be amazing.

The other thing I would say is to look out for as much fun in the [season-opening] five-part special event as we can possibly give the audience without calling it a “crossover.” Because we want them to get that same feeling as a crossover, even though it’s not a crossover.

TVLINE | And what can you say about any villains for Season 8?
As always, we’ll continue our graphic novel and interlude formats, to showcase both new and returning villains. For our new villains, one of them in particular will be the biggest and most powerful villain the Flash has yet faced — and that’s saying something! We’ll meet this unique baddie quite early in Season 8.

As for those returning villains, there will definitely be some very familiar faces from the last seven seasons who show up once more, in unexpected ways, to make a united Barry and Iris’s life a living nightmare.

Want more scoop on The Flash Season 8, or for any other show? Email InsideLine@tvline.com and your question may be answered via Matt’s Inside Line.