In late May, word began circulating that NBC had unofficially signed off on a plan to renew bubble dramedy Good Girls for a shortened fifth and final season, one that would give fans something that has become increasingly elusive in the broadcast-TV landscape: closure. All three of the series’ leading ladies — Christina Hendricks, Mae Whitman and Retta — agreed to take pay cuts to return for a reduced eight-episode swan song. Production was tentatively set to begin in Spring 2022. It was, for all intents and purposes, a done deal.

And yet, one month later, Good Girls was cancelled. As is often the case, the culprit was said to be money. “[We] very much wanted to bring Good Girls back for one more season to close out the story,” an NBC insider acknowledged at the time, “but unfortunately we were unable to make the financials work.”

Multiple sources connected to NBC, Universal Television and the show, however, maintain that the reasons behind Good Girls‘ unceremonious termination extend beyond mere dollars and cents. According to one Good Girls insider who requested anonymity, the series’ seemingly clear path to renewal hit a major snag in mid-June when negotiations with co-star Manny Montana — who plays fan favorite gang member-turned-Beth-crushing-antihero Rio — hit a wall. At issue: Money and scheduling. 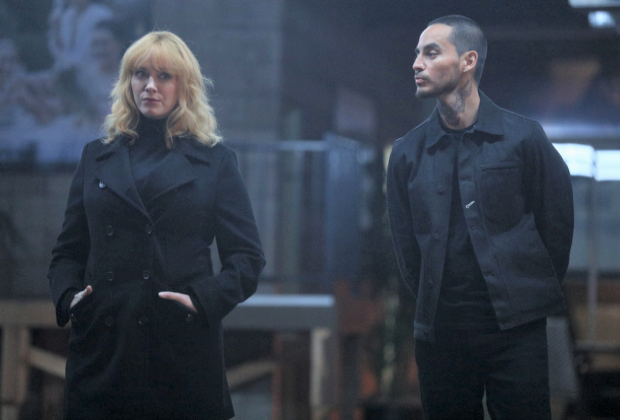 Some began speculating that Montana’s strained working relationship with on-again/off-again scene partner Christina Hendricks (who plays Beth) may have been a factor, making the actor less willing to take the kind of financial hit NBC was asking of him.

A rep for Montana declined to comment for this story, while a spokesperson for Hendricks did not respond to TVLine’s numerous requests for comment.

Bad blood between Hendricks and Montana had been something of an open secret in Hollywood circles. Even fans have long speculated — based on the pair’s frosty public statements about one another over the years — that there was no love lost between the duo.

In a 2020 interview with The Total Celebrity Show podcast, Montana described his working relationship with Hendricks as follows: “We come in, do our job, and then go home. It’s very business-like.”

When asked what it is like shooting the steamy Beth/Rio scenes, Hendricks told Medium in 2019, “He’s a great actor and we have great chemistry working together and… He’s just… It’s just a very sort of respectful work. You know, it’s funny, because I know people love [Beth and Rio]. We, of course… love that. It’s exciting and stuff. But it’s not as… it’s much more professional than anyone would think.”

The following year, during a Good Girls-themed Q&A at 92nd Street Y, Hendricks revealed that Montana refuses to address her by her actual name while on set. “Manny calls [me]… Chris,” she sighed. “No one in my life calls me Chris. It’s not my name. I think it’s totally stupid. And he’s never taken the chance to realize that I hate it. It’s really weird.” (You can watch the exchange at the 19:20 mark.)

Creatively speaking, a final season sans Montana was seen as a sizable, albeit not insurmountable, obstacle. But Universal Television ultimately decided to just pull the plug. The studio’s willingness to forego a fifth and final season of a show called Good Girls, due to the absence of a supporting male character, struck some as ironic. And suspicious.

“They were looking for an excuse to cut bait,” posits one source.

Reps for NBC and Universal Television declined to comment for this story, but one company insider now concedes to TVLine that “creative issues” did indeed factor into the studio’s decision not to move forward with a fifth season.

In the immediate aftermath of the show’s demise, a “sad and confused” Whitman took to social media to lament the cancellation, and also pay tribute to “my girls” Hendricks and Retta. “Love my pals on this cast so much,” she added. “It was such a joy being Annie and I’m forever grateful to you for supporting us. [O]K me go cry now.”