Mae Whitman is in the “still processing” stage of grief in the wake of Good Girls‘ cancellation. 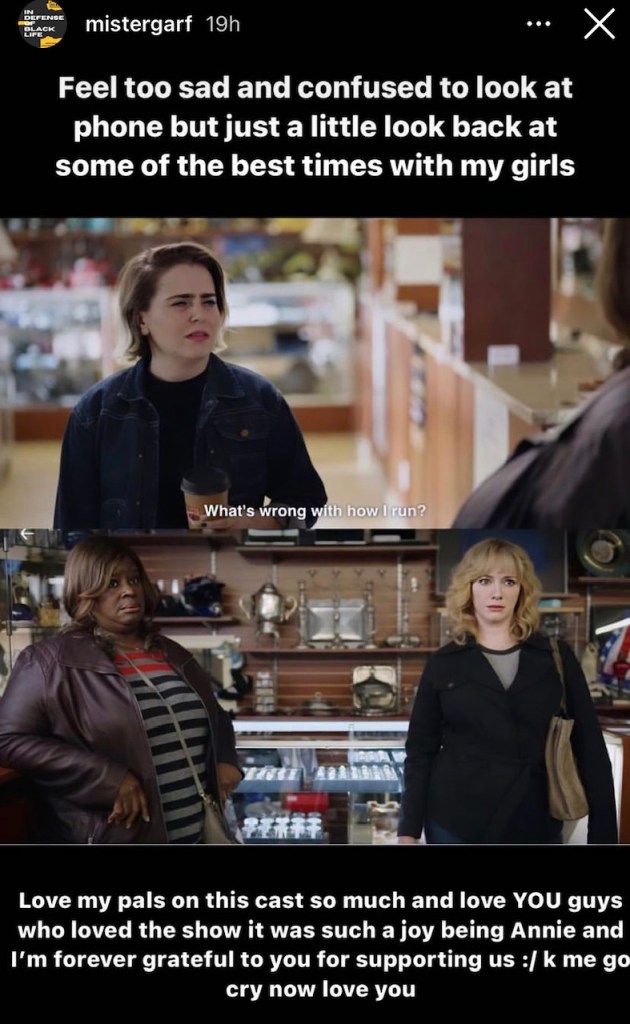 As we reported late Friday, NBC pulled the plug on the crime dramedy after four seasons. And efforts to relocate the series to Netflix for a fifth and final season also fizzled, rendering Good Girls officially dead. The now-series finale is set to air July 21.

“Feel too sad and confused to look at phone,” Whitman lamented in a weekend Instagram story, before sharing a number of images with “my girls” Christina Hendricks and Retta from the first four seasons.

“Love my pals on this cast so much,” she added, “and love you guys who loved the show. It was such a joy being Annie and I’m forever grateful to you for supporting us. [O]K me go cry now.”

Good Girls is averaging 1.5 million total viewers and a 0.34 demo rating in Live+Same Day numbers) — down 18 percent from its Season 3 tallies. Out of the 14 dramas that NBC aired this TV season, it ranks next to last in the demo and at the very bottom in total audience.

Back in May, Whitman attempted to stave off an unhappy ending for the show by rallying fans on social media. “We would like very much to not get cancelled,” the actress wrote to her 1.1 million followers. “Apparently, we are on the bubble — which means [NBC’s] considering not bringing us back [for Season 5]… Let NBC and Netflix know how much you love us.”