We need to talk about Kristen.

Evil‘s resident forensic psychologist is a confessed murderer; a pushed-to-her limit, effectively single mom; and a maybe-possessed minion of Satan. And in last week’s episode, Kristen skittered thisclose to stepping outside the boundary of her marriage, then feared she was losing her mind after seeing a flaming jinn sitting in the backseat of her car. (Read a full recap.)

Yep, we definitely need to talk about Kristen… so we went straight to the source: Katja Herbers, who gave TVLine the lowdown on her character’s trajectory so far in Season 2. Topics covered in our conversation included: how Kristen’s climbing background may inform what’s happening to her now, when her husband Andy might return and why David hasn’t shown up in her sexytime fantasies (at least, not yet).

TVLINE | Kristen is all over the place at the start of the season. Take me inside her head.
Well, I think she’s in a very interesting place, because she is going to have to deal with the fact that she’s now a murderer, which is something nobody wants to be, and it’s going to bring up a lot of problems and weird behavior. But she’s also weirdly proud, maybe, and relieved that she did this and that this guy is no longer a danger to her four children. I think she would do it again. She’s living those two realities at once. It’s a very interesting place for an actor to get to play.

TVLINE | How do you think Kristen is rationalizing all of the weird things that are happening to her, like the cross burning her hand for instance?
Kristen just really does not believe in evil or in the dark side. She believes that there are people who do evil things, but I don’t think she is worried that she has now gone to the dark side. I think people are worried for her, but I think she will always try to rationale her brain out of it until she can’t anymore. 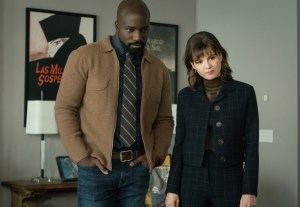 TVLINE | What leaps out at me is that Kristen is already under the huge stress of raising her four daughters alone while Andy is gone for long stretches, and that that alone might be enough to mess her up a bit.
She’s probably under such incredible stress, but in denial of that. Maybe she doesn’t even realize under how much stress she is [under], so she kind of just keeps going. And her background as a climber also, makes that she is addicted, in a way, to danger. She knows how to operate under high levels of stress, and it makes her mind very clear. She has an incredible force inside of her that we’ll see more of. [Laughs] I mean, that force also made her able to bludgeon someone to death, but I do think that it’s going to haunt her, and that’s going to make for a bunch of interesting situations.

I also think that because her husband’s not there, and she is doing everything on her own, yeah, she’s flirting with adultery and just needing to, I guess, feel her body or be put back into her body. She is going out and maybe picking up a guy. I mean, after you’ve killed someone, who cares about a little adultery, right? [Laughs] So, we just see somebody who’s sort of both unhinged and yet very together and trying to hold down this fort while falling apart and maybe having some kind of rebirth all at once.

TVLINE | And I was surprised, in Episode 3, that he didn’t show up in any of her musings along those lines.
I like that it’s open. It has opened up to anyone now. And I do think that Kristen and David have this attraction, which is both intellectual and physical. She really respects him, and she also considers him a friend, and she doesn’t want to mess with his life path. So I think it’s actually good that she doesn’t pursue him and ruin what he wants to do. However, I don’t think that’s gone. I think she’s just putting her focus somewhere else while that’s still happening. 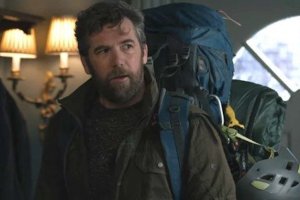 TVLINE | Kristen and Andy haven’t had any communication so far this season. We get the sense that his climbing business isn’t doing well.
No. [In a tone of mock outrage] Well, it’s our business.

TVLINE | I’m so sorry! You’re right.
[Laughs] Yeah. It’s not doing too great. He has to stay a little bit longer to figure that out, and then he’s going to come home at some point, and those were great scenes to get to play. Because, obviously, these guys have a lot to talk about — or not talk about — or to figure out, and I think he comes home to somebody he doesn’t quite recognize.