And what would be a finale be without a game-changing bombshell to kick things off? As revealed by the aforementioned talking cone, the money would only be won by a single contestant this time around. (As true trash historians will recall, the show’s first season ended with all 10 players splitting the money, regardless of certain couples breaking more rules than others.)

Naturally, the pent-up island dwellers spent their last 12 hours theorizing about who the big winner could be, with several players speculating that Nathan was destined to take it home. Then again, we also spent quite a bit of time with Marvin and Melinda, who broke down in tears as they reflected on how much their relationship fulfills them. Either way, no one was putting their money on Joey, who didn’t even hesitate when asked how he would spend his earnings: “Strip club!”

With 10 hours left until the big reveal, the players participated in one final workshop, a “spiritual rebirth” to shed their damaging traits and move on as individuals. This required everyone to write down their shortcomings — including poor Cam, who failed to correctly spell “pessimism” even after asking  for help. (For the record, this show is about improving the contestants’ hearts, not their brains. Lana isn’t a damn miracle worker.)

Then came Lana’s final judgment. While she acknowledged that all 10 contestants have shown “great progress,” three exceptional hotties stood above the rest: Cam, who began the game as a “player with a fear of commitment” and has matured considerably since; Carly, who arrived “on the hunt for frivolous connections” but who learned to enter relationships as her “true self”; and Marvin, who was initially only capable of making physical connections but has since “grown to respect the value of a loving connection.” 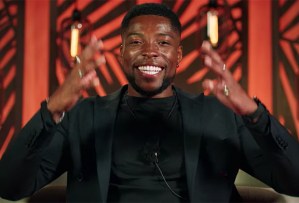 So, how did the season’s Top 3 become a Top 1? Why, Lana left it up to the other seven contestants, of course. (That friggin’ cone. I knew she had one last surprise in her!) Once the votes were tallied, Carly came in third place with a grand total of zero (not even from Joey!), making this a battle of the boys — and it was a close call.

In fact, until Lana revealed the final vote, Cam and Marvin were tied with three votes each; Melinda, Joey and Elle all voted for Marvin, while Emily, Tabitha and Nathan threw their support behind Cam.

OK, enough beating around the bush (or not). The winner of Too Hot to Handle Season 2, thanks largely to Chase’s final vote, is… Marvin Anthony! Needless to say, Melinda is thrilled.

Did you expect Marvin to leave the island as this season’s big winner? Grade the finale and the season below, then drop a comment with your thoughts on how everything shook out.