A gender-flipped Perfect Strangers reboot is in development at HBO Max, with TVLine Dream Emmy nominee Robin Thede (A Black Lady Sketch Show) and London Hughes (The Netflix Afterparty) set to star in the prospective comedy.

According to Deadline, the reboot is loosely inspired by the original series, and centers on the relationship between Dejay (Thede) and Poppy (Hughes), who “unexpectedly discover they are half-sisters when they both inherit a one-bedroom apartment above a trap yoga studio in Fort Greene, Brooklyn.” Thede will pen the script as part of her overall deal with Warner Bros. TV, and executive-produce alongside original series producer Robert L. Boyett. 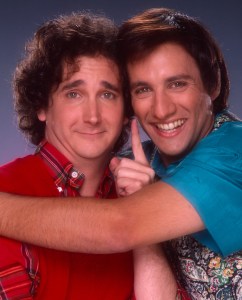 The original Perfect Strangers aired on ABC for eight seasons (and 150 episodes), between 1986 and 1993, and focused on the relationship between Midwestern American Larry Appleton (Mark Linn-Baker) and his distant cousin Balki Bartokomous (Bronson Pinchot), who had recently immigrated to Chicago from the fictitious Mediterranean island Mypos. The series spawned a hugely successful spinoff, fellow TGIF staple Family Matters, which was initially conceived as a star vehicle for Jo Marie Payton’s Harriet Winslow.

Perfect Strangers is the latest reboot in the works at HBO Max. The streaming service previously greenlit new iterations of Gossip Girl (premiering Thursday, July 8; watch trailer), Head of the Class (starring One Day at a Time‘s Isabella Gomez) and Pretty Little Liars.

All eight seasons of Perfect Strangers currently stream on Hulu.

Are you intrigued by the idea of a Perfect Strangers reboot? Drop your thoughts in a comment below.