Among the bombshells dropped in A Million Little Things‘ Season 3 finale: Delilah is moving to France, permanently?! Mon dieu!

During the two-hour season-ender on Wednesday, Stephanie Szostak‘s character announced that she wanted to relocate herself, Danny, Sophie and Charlie to her home country — where, viewers will recall, she spent most of the season after COVID-19 travel restrictions and an ailing parent kept her from returning to the United States. Delilah’s news was met with varying degrees of anger and refusal from her friends and family (Gary’s reaction, in particular, was pretty nasty), and she wound up sobbing on her couch in its aftermath. (Read a full recap of the finale.)

But is Delilah actually going to make the huge change? In light of Szostak’s heavily reduced screen time in Season 3 and that ambiguous ending, we asked showrunner DJ Nash whether the series was teeing up the actress’ departure in Season 4. 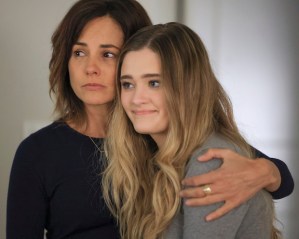 “What I can say is: In a show about the idea that you can get through anything in life if you’re surrounded by the right group of friends and family, [that’s] something we’ve practiced both on camera and off. Stephanie is incredible,” Nash tells TVLine, noting that the time involved in quarantine requirements (the show shoots in Vancouver; Szostak is based in the United States) would have made it impossible for her to be on set when needed and also with her family when needed. “The irony is, being the mom she needed to be off-camera, we actually made her not as good of a mom on-camera,” he explains, laughing.

Dealing with real-life scheduling complications created story snags, he acknowledges. “The struggle for us came in that I could totally buy that Delilah’s not home for Danny coming out, which is tough. But when your daughter is assaulted, that was a really tough one to figure out, and so we dealt with it.” (Fans will recall that Delilah appeared in international video calls with Sophie around the time of her attack.)

Nash continues that the show is “finalizing” plans now, “making sure that on a personal level, Stephanie and her family are comfortable with the amount that we’re going to ask her to do next year.”

He adds: “This is not the end of Delilah.”