The Handmaid’s Tale‘s Fred isn’t terribly bright or savvy, especially when compared to the women in his life. You know it. We know it. Joseph Fiennes, who portrays him on the Hulu drama, knows it.

But Commander Waterford himself? Not so much, Fiennes says, chuckling.

“I mean, that’s the whole thing about weak men who are given positions of a patriarchal kind of — in their own mind — protection through the regime,” he tells TVLine. Or, as author Margaret Atwood calls character in the 1985 novel on which the series is based, Fred is “a boot, hard on the outside, giving shape to a pulp of tenderfoot.”

Over the course of nearly four seasons, Fred hasn’t hesitated to put that boot down forcefully whenever and wherever he sees fit, particularly when it comes to “the powerful women in his life, who are both Serena and June,” Fiennes says. And therein lies the emasculating rub: Fred admires their strength, the actor observes, “but he’s threatened by it, and that really is the root of the character.”

But does Fred know he’s weakest cog in his relationships? “No,” Fiennes says, laughing. “And that explains even more why he’s that dim.”

Ahead of Episode 9, which begins streaming on Wednesday, we asked Fiennes to preview the final two episodes of Season 4 — one of which, he reveals, includes a June/Fred confrontation that is his favorite scene in the season.

TVLINE | Let’s go back to that pregnancy reveal in Episode 4. Serena did not want him to know that she was pregnant. He finds out. Talk to me about that scene, where it’s simultaneously everything Fred wanted, but in the worst possible way.
It’s the worst possible way. You’re right. It’s everything that he wanted and never thought he could get. So, the surprise is monumental, and it plays into the theme that will elevate Fred which is the perfect Gilead family. That’s something that he has strived for and has been haunted by previously — that he’s never had a child of his own and he may be sterile. So it’s a huge reversal of fortune, and it’s fascinating. I think he sees it as a sign that he might be able to, in his pious, indoctrine-ish way, play with. But also, it gives him time to think about when you have a child of your own, how protective you become of that and your family unit. And then he might just begin to reflect upon what he put June through in terms of the separation from her family. Will he ever get that far? I don’t know, but it opens up that discussion for him. 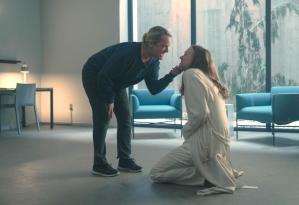 TVLINE | In Episode 7, June gets this great, charged scene where she says the things she wants to say to Serena. And in Episode 8, Fred and June have an interaction in the court, but that’s it. Can you tease whether or not there’s any similar, “Let me tell you exactly how you ruined my life” scenes between June and Fred in the rest of the season?
Well, just going back, I love that [June/Serena] scene. Suddenly, June has got her voice back. She’s been scarred psychologically and physically by the Waterfords, and those scars are deep, and she bites back. I love that scene for that.

In terms of Fred and June, we will. One of my favorite scenes will encapsulate exactly that dynamic. This has been the season of [two-person scenes]. Because of COVID restrictions, we’re rendered to just two people in a room — but I have to say, it’s gotten richer because of it. We get to see wonderful moments with actors, and I love O-T [Fagbenle]’s opening up of Luke that we haven’t seen. The fallout you know of that relationship has been wonderful to examine. But we do get to see, in terms of Fred and June, one of my favorite scenes, if not the most favorite scene of the season for me, later on.

TVLINE | It really struck me, in court when June is giving her statement in Episode 8, that Fred can’t stop himself from responding to her, even when he knows it’s not a great idea and might hurt his case. It’s like, even after everything, he’s drawn to her.
I think you’re right. He is drawn. He’s drawn to powerful women… There’s the pathetic and weak side of Fred, but he can’t help but hop on. The weird thing is, it has sort of a positive effect for him in terms of this group [of supporters] outside, and [the Waterfords] can build on that.

And he’s aware that there’s press in there, and it’s not the trial. It’s the pretrial. In his mind, as I looked at that scene, he wants to rationalize those events to suit his narrative. And it’s all about, “Well, I was good for you and I let you see your daughter,” and it was a rich moment. It’s what predators do to their victims, and it’s an abhorrent and real thing. It’s nasty to have to portray it, but it’s quite real… So, it’s nasty, but it’s Fred. [Laughs]