I’m not sure what’s more deeply satisfying in this week’s The Handmaid’s Tale: the way June finally gets to tell the world exactly how Gilead abuses its women, or the way June kindles her fellow former handmaids’ latent rage until it builds to a crackling bonfire.

Episode 8, titled “Testimony,” finds June appearing at a confirmation of charges hearing for Fred Waterford. The International Criminal Court proceedings are a precursor to a trial, and June doesn’t have to appear in person — but she wants to. Or, as she so picturesquely puts it while attending a handmaids support group run by Moira: “I can’t f–king wait.”

But how does it go when June airs the Waterfords’ sins in a public forum? Read on for the highlights of the hour.

GHOSTS OF THE PAST | At the start of the episode, June chops off her long, handmaid-y hair herself in the bathroom. She’s (understandably) angry about everything she’s gone through, and she wonders aloud to Moira why more of the women in the support group aren’t filled with a similar rage. “How do you know they’re not?” Moira replies. 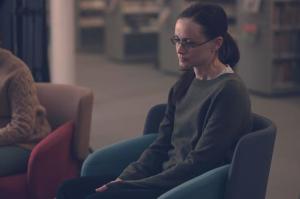 The meeting, held at a local library, is interrupted by a woman who wants to talk to Emily. Seeing Emily’s shaken reaction to the woman’s appearance, June and Moira yell at the stranger to leave. On her way out, the woman drops her contact information on the ground; June picks it up. At dinner that night, we learn that the woman was known as Aunt Irene in Gilead, and she was assigned to the district where Emily was posted before she met June. June urges her friend to face Irene, who’s going by the name Iris now. “You have to get everything out you’ve been holding in. I promise you, you will feel better,” she says. Emily’s not sure. “We’re not all like you,” she says, and it’s delivered softly but feels like an indictment.

JUNE TESTIFIES | Remember how June told Luke about seeing Hannah at the lake house? He mentions it to Mark Tuello, and June is livid when she finds out — she didn’t want to tell Tuello that yet. Luke is struggling mightily to understand his wife and what she’s been through, but as he tearfully tells Moira (unaware that June can overhear), “She is like a stranger half the time. We talk about Hannah, and then in bed…” Moira both bucks him up and tells him to be patient, because getting over the trauma of Gilead is “a bumpy f—king road.”

The next day, Luke shows up at court — even though June expressly did not want him to attend. The Waterfords show up as a seemingly unified front, with Serena decked out in maternity teal. June is sworn in and testifies. She runs through the events of the series and I know we all know there’s a lot of rape in this show but WOW listening to this litany is harrowing. June is very matter-of-fact in her delivery until she starts talking about Mrs. Lawrence and “my friends, who lost their lives and can never be heard.” She asks the court to put Fred on trial and slap him with the maximum possible sentence for his crimes.

Fred’s attorney is allowed to question June, and the lawyer opens by talking about how June started seeing Luke when he was still married to another woman. It gets uglier, and then Fred just can’t stop himself from standing up and directly addressing his former handmaid. The situation devolves, and eventually June has had it. “I am done,” she announces, turning to leave. “Anything more can wait for your trial.” (Side note: Who else was disconcerted by how many supporters the Waterfords had as they walked out of the building?) 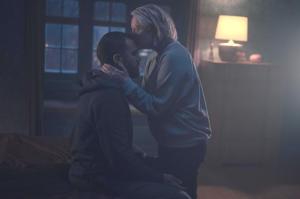 At home that night, Luke apologizes for coming to court, “but at least now, I know everything, and maybe we can just move on,” he says hopefully. (Side note: He can’t ACTUALLY think he knows everything after hearing her brief statement, right?) She shuts down his attempts to get her to open up to him, and they’re both teary as the weight of everything settles upon them. Eventually, they start kissing up, but when she goes for his belt, he stops her. “Talk to me!” he cries, but she won’t, and she leaves. Luke covers his face and weeps.

‘I FEEL AMAZING’ | At the next support group meeting, June finds Aunt Irene hanging around outside and brings her in. A quick show of hands reveals that a bunch of the former handmaids want her to stay, and Emily says fine, so June pushes a chair into the center of the circle and the older woman sits.

That’s when we find out that Irene was the person who outed Emily’s martha lover and informed the eyes, aka “You’re the reason they hung that poor woman, and you’re the reason that they mutilated Emily,” June says flatly. Irene wants Emily to forgive her and winds up on her knees, begging, but June points out that Irene passed herself off as another refugee to find sanctuary in Canada. “Why do you think you deserve forgiveness?” she asks. Emily ultimately tells Irene that there’s nothing she can do to fix what’s happened, and the former aunt sobs.

Later, though, Moira talks to Emily and says that maybe Em can get Irene to testify. So she arranges to see the aunt… and finds her hanging from a tree at the spot where they were supposed to meet. Emily slows her car, then just keeps driving. The support group later discusses Irene’s death, which leads Emily to tell them, “I feel amazing. I’m glad she’s dead. And I hope I had something to do with it.”

This loosens something in the group, and soon the other members are volunteering their fantasies about the violence they’d do to their former commanders and their wives. Moira, a little disconcerted, gently points out that they can’t live in anger. “Why not?” June pipes up. “Why does healing have to be the only goal?” Then Moira tries to bring the session to a close, but June says she wants to stay — and the rest of the women do, too.

At home, June finds Luke and hugs him tight, ready to reveal more: “I have to tell you about the last time I saw Hannah.” 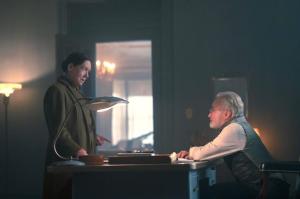 BACK IN GILEAD | After Aunt Lydia gets mad and uses her cattle prod on a few too many people (including a fellow aunt), she winds up in front of Commander Lawrence. “It must be killing you that June won,” he dryly remarks before telling her that he needs her back in form, because they have a situation: a “fugitive handmaid captured in Chicago,” and it’s Janine. She lives! Lawrence points out that Lydia has a taste for causing pain, and he wants to give her an outlet for it. “So,” he says, indicating Janine’s photo, “do with her what you will.”

Poor Janine is being held at the same torture dungeon where they took Jane. Lydia tells her that June is in Canada, and Janine only weakly asks that she not be made a handmaid again. Lydia hugs her and cries.