And just like that, Chris Noth is reprising his role as Mr. Big for HBO Max’s Sex and the City sequel series.

The streamer announced Wednesday that Carrie’s longtime paramour will return for And Just Like That…, but it’s unclear what the status of their relationship will be. As you’ll recall, the pair tied the knot in the first Sex and the City film and celebrated their second anniversary at the end of Sex and the City 2.

“I’m thrilled to be working with Chris again on And Just Like That… How could we ever do a new chapter of the Sex and the City story without our Mr. Big?” executive producer Michael Patrick King said in a statement. 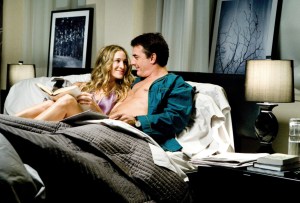 Noth joins OG cast members Sarah Jessica Parker, Cynthia Nixon and Kristin Davis, who are also set to revive their iconic characters for the HBO Max series. John Corbett will also appear in multiple episodes as Carrie’s ex Aidan. Kim Cattrall, however, will not be returning as Samantha for the 10-episode revival.

In addition, And Just Like That… will feature a bevy of new faces, including Grey’s Anatomy veteran Sara Ramirez as Che Diaz, a non-binary, queer, stand-up comedian who hosts a podcast on which Carrie is regularly featured. “Che is a big presence with a big heart whose outrageous sense of humor and progressive, human overview of gender roles has made them and their podcast very popular,” per HBO Max.

Are you looking forward to Mr. Big’s return? Where do you think he and Carrie are in their relationship? Sound off in the comments below!