I know it’s been a week since ABC aired Big Sky‘s Season 1 finale, but I can’t stop thinking about something, and so I want you to start thinking about it, too: Wouldn’t Jerrie and Lindor make one smokeshow of a romantic couple in Season 2?

If you don’t regularly watch the thriller, which is set in Montana and follows detectives Cassie Dewell and Jenny Hoyt as they kick ass and rock cowboy boots, lemme catch you up real quick. Jerrie, played by Jesse James Keitel, is a transgender woman who met Jenny and Cassie when they rescued her from a human trafficking ring. She later started working in the office of their private investigations firm.

That’s how Jerrie crossed paths with Mark Lindor, played by Omar Metwally, a U.S. Marshal who arrived in Helena halfway through Season 1. Lindor’s goals dovetailed nicely with those of Dewell & Hoyt: He wanted to capture Ronald Pergman, Jerrie’s kidnapper who’d been in the wind ever since trafficking partner was busted. 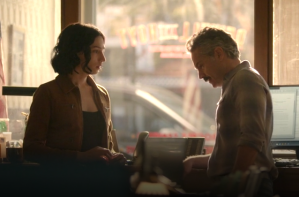 Lindor presented as an odd bird, and remained so through the back half of the season. At first, to an audience trained to be highly suspicious of pretty much anyone except Jenny and Cassie, he seemed like a weirdo who’d swooped in to grab the glory of Ronald’s inevitable arrest. Eventually, he revealed himself to be a gentle — if strange — soul with an unresolved crime in his own past (the unsolved kidnapping of his sister) and a strong belief in the restorative powers of Hall & Oates.

The show wasted little time throwing Cassie and Lindor into scenes together. Though she clearly regarded him as a threatening nuisance upon his arrival, he eventually became something of a confidant and — in a flirty scene in the season finale — a potential romantic hook-up.

And I do want Cassie (played by Pitch breakout Kylie Bunbury) to find the adoration and care that she so clearly deserves… just not with Lindor. Because Metwally’s fleeting scenes with Keitel have me so incredibly intrigued about what a Lindor/Jerrie love story might look like.

Here’s why. Throughout Season 1, my favorite performance on the show has been Keitel’s. She imbues Jerrie with grace and poise at all times, even during those dark days in Ronald’s prison. She makes Jerrie wryly vulnerable, honest about the challenges of living as a trans woman in the American Midwest but unwilling to let those travails define her. And she can sing like a celestial being (unless, of course, a certifiable psychopath is lurking at the edge of the crowd).

Combine Keitel’s Jerrie with Metwally’s lovingly offbeat take on Lindor — and take into account that they are both rather pretty human specimens — and we’ve got the makings of a very fun-to-watch couple, folks. This became incredibly evident to me in the moments before they stormed Scarlet’s sister’s house, searching for Ronald and his girlfriend. They argued. They whispered. They both brandished guns and crept, stealthily. It was AWESOME.

Plus, the way they look at each other! It’s tenderness mixed with a little desire, all amped up by Lindor’s glorious mustache. He and Jerrie set off sparks every time they’re in a room together.

And yes, I’m aware that a) Jerrie already has a sorta-suitor, and b) Lindor may have bit the big one when he was shot in the finale. But in a show that recently hinted it might bring back John Carroll Lynch as his deceased twin’s character, they feel quite minor, no?

So here’s my official plea to the Big Sky gods: Make Jerdor (Linrie?) canon in the upcoming Season 2. Because keeping those two apart when they’ve already exhibited such great chemistry? To quote Lindor’s favorite band, I can’t go for that.