Some people like to jokingly refer to their significant others as their partners in crime. But in the Big Sky Season 1 finale, Ronald and Scarlet make that designation official.

The pair, who were on the cusp of getting caught by Lindor and Jerrie at the end of the previous episode, quickly hatch a plot at the start of this one: Scarlet will act like Ronald’s hostage, and when he lets her go, it’ll create the diversion he needs to escape Mary’s house. But he doesn’t expect a gun-toting Jerrie to be there, barring his path to freedom via the back door, and pretty soon Ronald is in handcuffs and on his way to a jail cell.

Yay, right? C’mon, you’ve watched this show for a while now — there’s no way justice could be that simple. And it’s not! Ronald requests that Cassie and Jenny be present when Lindor questions him ahead of the FBI’s arrival in town. As a good faith gesture, he admits to killing Kelli, the woman whose name was scratched into his truck’s cab. And when he demands that they bring him to the place where he says Mary and Kelli have been stashed, Lindor thinks this is a good idea, despite the fact that numerous TV shows and movies have shown us that transporting a killer to the location of his choosing is NEVER A GOOD IDEA. 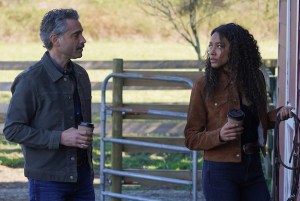 So Ronald brings them to the creepy, life-size dollhouse-like wooden box in which he stashed Kelli and then, eventually, left her to starve to death, bound to a bed. (I believe she was the unknown person/corpse he was talking to earlier this season.) And on their way back to the jailhouse, with Cassie and Lindor driving Ronald and Sheriff Tubb chauffeuring Jenny, some of Ronald’s associates from the human-trafficking syndicate stage an accident in order to extract him. Lindor’s car flips about 400 times; when it lands, the grate between front and back seats has shifted enough that Ronald can reach through and try to strangle Cassie. (Lindor, by the way, might just be a goner — especially after Cassie basically said she’d go out for drinks with him earlier in the episode. #HopesDashed)

The men freeing Ronald shoot Tubb (he survives) and are about to finish off Cassie when Jenny draws their attention… and one of their bullets, straight to the torso. As Ronald and his accomplice take off, Cassie cries over Jenny as she bleeds out onto the pavement. 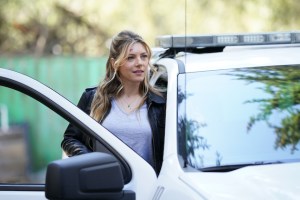 But it seems like Jenny isn’t quite done yet; as she’s loaded into an ambulance, she makes Cassie go after Ronald. So Ms. Dewell grabs the dead accomplice’s gun, commandeers a Sheriff’s Department patrol car and goes Ronald-hunting.

How did Ronald get so lucky, you might ask? Right before he was taken into custody, he told Scarlet to search the hard drive he had taped under their bathroom sink for someone named “John Milton,” a member of the syndicate who could help. So she did, and a very scary Montana State trooper showed up at her house and told her to get ready to leave ASAP. She was driven to a rendezvous point, and when Ronald eventually showed up, it seemed like they were free and clear. But when she asked about Phoebe and was told they would not be going back for her daughter, Ronald said “Grab the wheel,” and he strangled their driver while she made sure the car didn’t swerve off the road. At the end of the hour, the two killer weirdos drove off, hand in hand.

* As she promised, Margaret finally killed Horst by refusing to give him water as he was choking on a handful of his pills. Later, Cheyenne stopped by Dewell & Hoyt to drop off cupcakes (?) and announce that she was in charge of the ranch and that Rosie had revised her statement with the sheriff’s department, posthumously exonerating Blake.

* The intrepid Denise, in searching for background information on Scarlet, learns that a) someone has expunged her records and b) she spent time in a facility for the criminally insane.

* Did anyone else catch Ronald’s passing comment that Legarski was a twin? Dare we hope that John Carroll Lynch will grace our screens again?

Now it’s your turn. What did you think of the finale and the season on the whole? Grade both via the polls below, then sound off in the comments!