After a dozen seasons, countless surgeries and enough heartache to give anyone a coronary, Grey’s Anatomy’s Jackson Avery said goodbye Thursday to Grey Sloan, Seattle and, well, all of us as he set off to begin his new life with April and Harriet in Boston. Read on, and we’ll go over not only Jesse Williams’ last scenes but the episode’s surprising hook-up, its outta-nowhere extra exit and everything that happened in “Tradition.”

‘TO CLARIFY WHAT JUST HAPPENED, JACKSON AVERY IS NOW… OUR BOSS’ | As the episode began, so did the Jackson flashbacks. (Was he — were we — ever really that young?) As Bailey reactions go, she took the news that he was moving to Boston fairly well. How could she not, when he pointed out that she and Richard had shown him the kind of person, the kind of fighter, that he wanted to become. Elsewhere in the hospital, Teddy, Owen and Maggie reported to Mer that she was being kicked out of Grey Sloan. The one downside? DeLuca wouldn’t be there to see it happen, especially after he’d taken such great care of her. At least Teddy was flying high. “I actually feel hope!” she exclaimed before falling into an ill-advised kiss (for starters) with her ex-fiancé. (Koracick who?) Jo told Carina that she wanted to learn as much as she could from her before she left for Italy. Ah, but Carina would be back, she said; she was marrying Maya and becoming an American citizen. Finally, at Mer’s, Amelia panicked at the thought of her sister-in-law returning home to find the disaster area that it had become. “She is gonna report us for child abuse!” Amelia fretted. 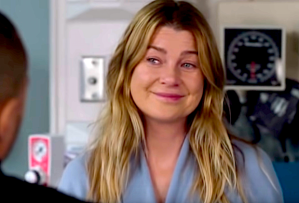 Shortly, Mer beseeched her pals to talk about something, anything but her condition, so they all had a good chuckle over Maggie’s engagement and wedding plans. They also revealed that Jackson was leaving to run the Catherine Fox Foundation. Yikes. “Any other tragedies I should know about?” asked Mer. Err… um… Next topic, please. Of course, Bailey couldn’t put off telling Grey about DeLuca forever, Richard advised when he and Miranda were alone. In other developments, as Koracick and James were treating a tribal elder named William, they wound up getting a second patient when his granddaughter Marianne appeared to go into labor. Of note: Taryn was so distracted that Tom replaced her with Levi. WTH was up with Helmouth? At the nurses’ station, Link said that he and Amelia would be leaving Mer’s as soon as Grey got home. “Ya think so?” replied the telling sound effect that Owen made. When Jackson broke it to sex buddy Jo that he was outta there, “Wow” was her reaction. Sweetly, he thanked her for being a good friend — oh, and for all the sex. When he visited Mer, she declared herself the last man standing — the last member of their residency class to still be there. “I don’t want this to be our big goodbye,” she said, adding, “You go give ’em hell, Avery.” In response, he thanked her for teaching him how to do exactly that. (And oh, the flashbacks… too many feels!) 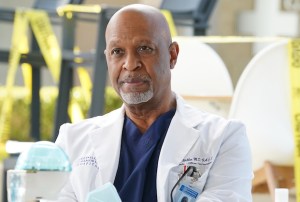 ‘YOU’RE MAKING IT SOUND LIKE A COVEN’ | Halfway through the episode, Marianne gave birth to a healthy baby as James employed tribal methods in his treatment of her grandfather. Inspired by William’s retelling of the baby’s birth, as well as Jo’s career change, Koracick appeared on the verge of making a change himself. Before Carina took off for Italy, Jo made sure to tell her how glad she was to have known her brother. At last, Bailey and Richard broke it to Mer that Andrew was dead. “He’s OK,” she said. “He’s not,” Miranda replied. “He is with his mother,” said Grey with the certainty of someone who’d seen their reunion on limbo beach. At Mer’s clap-out shortly thereafter, the patient was a no-show; instead of let her buddies “surprise” her, she had Jackson sneak her out of the hospital and drive her home. Speaking of which, Owen and Winston warned Link that leaving the sister house might not be as easy as he expects. “Meredith’s house just has this power, this pull,” Hunt said. For one thing, it always smells like waffles. 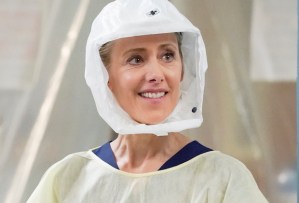 As the episode drew to a close, Richard made clear that when he’d asked Maggie if they’d picked a date for the wedding, he hadn’t meant to invite himself or imply that he should walk his daughter down the aisle. She and Winston then revealed that her adoptive dad had had an idea since he was going to escort Maggie to the altar — they should have Richard officiate the ceremony. When Levi caught up with Taryn, she revealed that she didn’t know what had happened to her. All she’d ever wanted was to be a doctor, and now all she wanted to do was run away from there. The pandemic wasn’t just affecting patients, Schmitt reassured her. It was affecting them, too. And since he wasn’t sure about moving in with Nico, he invited her to move in with him… wait, at Jo’s? She’s an OB resident, Levi pointed out. She’d be home less than they would. As soon as Mer walked through her front door, it was group-hug time with the kids. In the parking lot of Grey Sloan, Koracick recounted to Jackson how many roommates of color he’d lost while being treated for COVID. “The world is only that way because people who look like me made it that way,” he said. So would Jackson please “let me be worthy of being spared” by helping change the world? “You don’t even have to stop hating me… Just let me help.” (How, how, how is the show letting Greg Germann leave?!?)

So, what did you think of Jackson’s sendoff — and the fact that he’s taking Koracick with him? Read Jesse Williams’ take on his character’s exit (click here), then hit the comments.