Something weird happened during The Conners finale: Nearly every character cracked a smile.

After a brutal year that saw Dan’s drywall business go under, Ben and Darlene’s magazine flatline, and Becky fall off the wagon, things finally started looking up.

Among the big wins in Wednesday’s season-ender: Dan and Louise got engaged; DJ and Mary were reunited with Geena, who retired from active duty; and Jackie’s boyfriend Neville made a huge investment in her ailing Lunch Box business.

Of course, it wouldn’t be a proper Conners finale without some drama, which came in the form of Ben rejecting Darlene’s marriage proposal.

Below, showrunner Bruce Helford breaks down the episode’s biggest twists and turns, and teases what’s ahead in Season 4.

TVLINE | The Conners haven’t had a lot of wins this year, but the tide appears to be turning in their favor…
I’m glad you noticed that. We put them through hell this year. One of my favorite moments in the finale is when they’re telling Geena all the things that have gone on [in her absence]… As an audience member, you’re going, “Holy cow! All of that did happen. What a weird rollercoaster it’s been.” We felt it was time [for a change]. Emotionally, I think America’s ready for some things to improve.

TVLINE | You’ve played the long game with Dan and Louise. Why was now the right time for them to get engaged?
Dan had so much trepidation about entering a new relationship. He had so [many] feelings of betrayal of his beloved spouse. But we thought we took [Dan and Louise] on a journey that was very honest and long enough to where now [it felt appropriate]. Louise had a rough experience with COVID, and that brought her to the point of realizing that she does want to have a partner… We felt that was a great place to go to finally get them to commit to each other.

TVLINE | How did John Goodman feel about Dan and Louise’s engagement?
He, too, felt it was time. We had done proper due diligence to what a guy goes through when he loses the love of his life. And he loves Katey [Sagal]. They’re just great together. And she loves [the relationship] as much as he does. 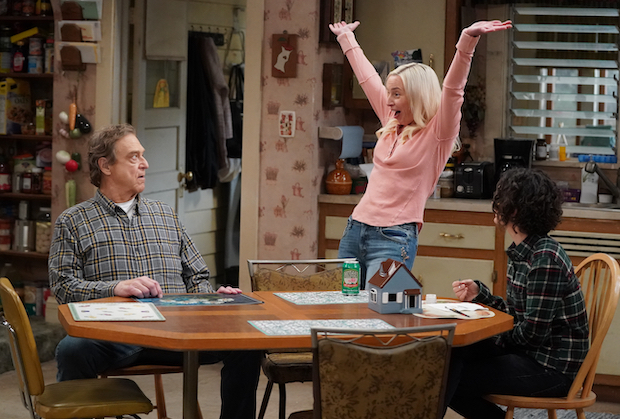 TVLINE | Dan consulted Darlene and Becky before he proposed to Louise, but not Jackie. Surely Roseanne’s sister would have mixed feelings. Why didn’t that conversation take place?
Jackie has [at times] had too much to say about his life. [Laughs] I don’t think he ignored her intentionally. Also, I don’t think he felt like he needed her approval.

TVLINE | In the episode’s tag, Becky suggested that Dan and Louise could potentially elope during their road trip. Is that something you’re seriously considering, or can we expect a wedding in Season 4?
No, they’re not going to elope. That was to justify why they were rushing and trying to get the trailer all gussied up with the congratulations stuff, because they thought they might just sneak out. We won’t be coming back to them already married. There’s more fun to be had there.

TVLINE | Now that Rebel has been cancelled at ABC, will you push to make Sagal a series regular next season?
I don’t know that Katey wants to be a regular. I mean, she wants to be on the show a lot. We were pretty bummed that Rebel didn’t continue because we love Katey, and we knew that was important for her. But all along she said, “I want to be on this show.” She’s so in demand that I don’t know that she could make the commitment to being a regular. But even before Rebel was cancelled, she committed to doing a bunch of [episodes] next season.

TVLINE | You’re not concerned about marrying Dan and Louise and not having Sagal contracted as a regular?
No. We’ll deal with those things. If the outside real world interrupts our inside world, we’ll figure it out.

TVLINE | Darlene has given Ben plenty of reasons to end things over the last two seasons. Why when she finally steps up and proposes marriage does he step back?
Ben had done a great job, each time [Darlene let him down], of swallowing it and going, “OK, I understand,” and building small resentments. But the body keeps score, right? When she put it to a test by saying, “Marry me,” I think his decision was made in that moment. He did not expect this to happen, and he was forced to be completely honest about what was going on in his head. 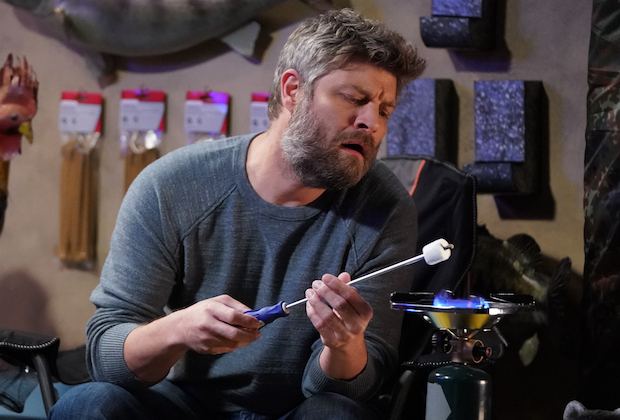 But it’s interesting, because there are people who said that he was being a jerk by not realizing she needed to go to Hawaii, or go with her and give her what she needed in this moment of her mid-life crisis. And there were other people [asking] why she was being so frivolous… It was complicated enough for people to see both sides of it… But we felt that was the right decision for [Ben] to come to.

TVLINE | This is just a temporary breakup though, right? Jay R. Ferguson isn’t going anywhere?
I won’t address the breakup and how that’ll go, but [Ferguson] is a regular on the show. He’s going to be there. We love Ben, we love Jay, we love that character. 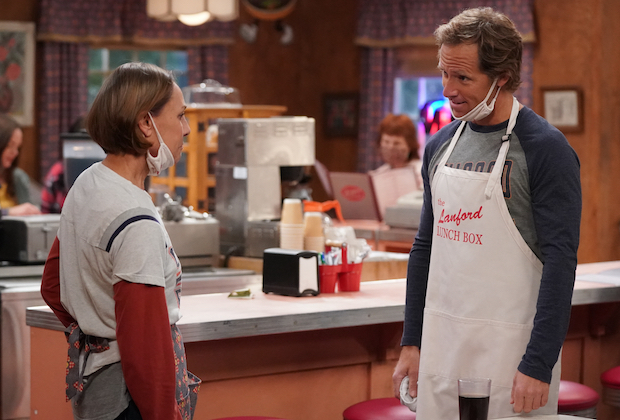 TVLINE | With Neville investing in The Lunch Box to turn it into a Chicago Bears-themed sports bar, have we seen the last of that iconic restaurant set in its current, lived-in form?
It’s going to be colored more in the way of being a sports place, but it’ll still [look like] The Lunch Box. That’s very important to Jackie, you know? She has a lot of history there with her sister. It became a nesting place for her and a place of comfort, and it’s gone through so much with the pandemic hitting at the absolute wrong time.

TVLINE | Becky just got out of rehab. Now she’s returning to work full time at The Lunch Box — and there’s now going to be a bar. Should we be concerned?
Rehab isn’t always successful, but I think she’s on a good path. Working in a bar could be tricky for her, and that’s something we may explore, but Sam from Cheers also worked in a bar. He was an alcoholic. 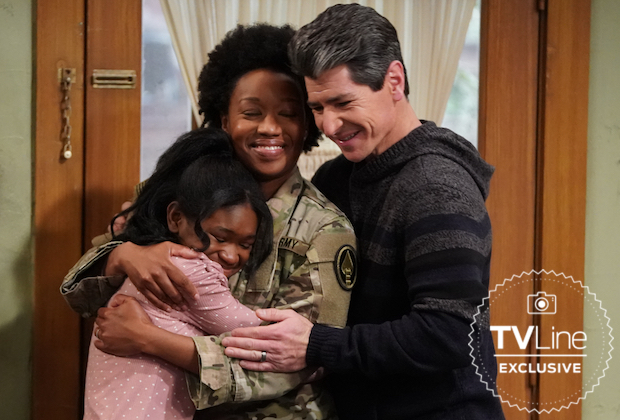 TVLINE | Now that Geena has returned to Lanford, can we expect more storylines for DJ and his family in Season 4?
Well, we’re definitely going to see Maya Lynne Robinson more next season. Like with Rebel, we felt so wonderful about Maya getting The Unicorn [in 2019]. We hated losing her, but we had so much planned for that character… We’d prefer [to have seen] The Unicorn continue, but [now] she’ll be available to us, which is great. So, yes, we’ll see more about [DJ and Geena’s] relationship.

What did you think of The Conners finale? And what are your hopes for Season 4? Sound off below.