The Rebel cancellation backlash is growing.

Mere hours after leading lady Katey Sagal took ABC to task for its abrupt “reversal of support,” series creator Krista Vernoff — who also oversees Grey’s Anatomy and Station 19 for the network — similarly took aim at her bosses for pulling the plug on Rebel after just five episodes.

After quoting a line in a Deadline story positing that modestly-rated Rebel was believed to have had a good shot at scoring a second season largely on the strength of Vernoff’s stature within the network, the EP wrote in a now-deleted tweet, “You’d think, wouldn’t you?” She then added: “You give them three shows during a pandemic, they give you five episodes. Cool. Cool. Cool.” 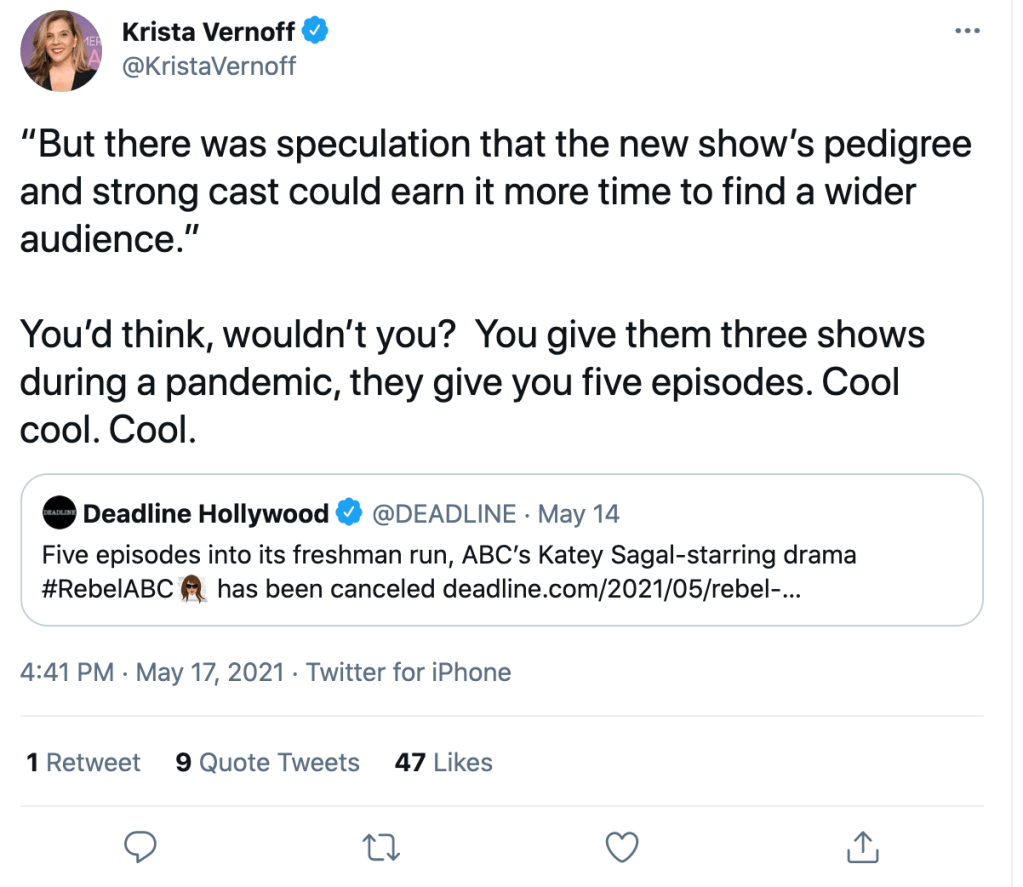 Season to date, Rebel has averaged 3.2 million total viewers and a 0.43 demo rating (in Live+Same Day numbers) — down a tick from A Million Little Things‘ Season 3 averages in the time slot (3.3 mil/0.5). The final five episodes of Rebel will continue to air Thursdays at 10/9c on ABC.

Earlier Monday, Sagal admitted that news of the cancellation — which came down on Friday — was “a shock and a heartbreak,” adding, “Things take time to catch on. Rebel tells the story of a woman who speaks up for what is right, the show has heart and purpose, funny and tears, and we, the cast, are all scratching our heads at the reversal of support from ABC.”

The actress added: “As Rebel would say, fight for what you want, make people listen, and in this case, if our show can find another, more suitable place to land, we will do the happy dance. If not, we gave it our all and made our voices heard, which is the message behind Rebel! Always Speak Up!!”