Titled The Chair, the six-episode satire — created and co-written by Benioff’s real-life wife, actress Amanda Peet — finds the Killing Eve star playing the first female and woman of color to head up the English Department at the (fictional) Pembroke University. It’s set to premiere on Aug. 27.

Scroll down to check out the cheeky news clipping announcing the appointment of Oh’s character, Professor Ji-Yoon Kim. 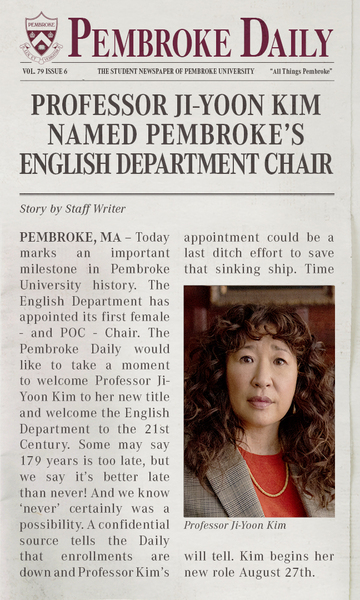 While the series will be Peet’s first as a writer and showrunner, she has two plays under her writer’s belt — The Commons of Pensacola, produced by the Manhattan Theatre Club in 2013, and Our Very Own Carlin McCullough, produced at Los Angeles’ Geffen Playhouse in 2018.

Oh, meanwhile, is set to begin production on the fourth and final season of Killing Eve. Also, ICYMI, she is never going back to Grey’s Anatomy.