Warning: This post contains spoilers for The Circle‘s Season 2 finale.

Were you surprised when you saw who won Season 2 of The Circle? Well, you probably weren’t half as surprised as the winner herself was.

“I thought when Mitchell left, it was over,” Season 2 contestant Deleesa St. Agathe, aka Trevor, confesses to TVLine. “My game was completely shot.” But even though the #Trifecta fell apart, Trevor held on tight to his lovey-dovey alliance with Chloe, and in Wednesday’s finale — read our full recap here — Deleesa pulled off a shocking win in the final ratings, taking home the $100,000 grand prize. She couldn’t even believe she made it to the final two with Chloe, actually: “I’m like, ‘How am I even still standing up here?’ I thought I would be the first one [blocked].” 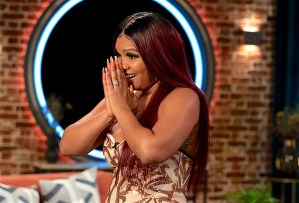 Deleesa played a smart game, though, keeping a tight lid on her catfish identity: She pretended she was her real-life husband Trevor, making him a single dad and casting their real-life baby daughter Toni as Trevor’s child. Toni is only a year and a half old now, Deleesa says, so leaving her baby girl to go film the Netflix reality show was the toughest part for the new mom: “She was much younger when I was away, and I’ve spent every day with her, so leaving her was so hard. There were nights that I cried and cried, and I really missed her.”

Filming of The Circle‘s second season took place in the UK last fall over the course of “maybe four or five weeks,” Deleesa says, including two weeks of required quarantine. But she’s not really sure about the time, because days inside the Circle tend to run together in a blur. “We didn’t have calendars or phones or anything,” she explains. “In the apartments, there are lights everywhere, so it could be 2 o’clock in the morning, and they’re telling us it’s 9 am, and we’re like, ‘OK!’ We don’t know. It was like walking in a dream that we didn’t control.”

Players were provided food to stock their kitchens, but they had to make all of their own meals — “Nobody’s going to come and cook for you. You’re grown” — and the lack of human interaction does start to wear on you after a while, Deleesa admits. “All you’re thinking about constantly is the game… ‘Did I make the right move? Did I say the right thing? Does this person truly like me and have my back, or are they playing a game?’ It is non-stop. My head was constantly in the game, 24/7.” It helped her to bring along some mementos from home, though: She had a pillow covered with photos of Trevor and Toni, along with a framed photo and note from Trevor “basically just telling me good luck, and that he’s proud of me.” 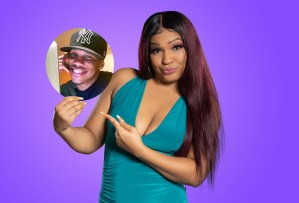 Trevor also helped her prepare by giving her a crash course in masculinity, she reveals: Deleesa and her husband “sat down for a whole week, every night for hours, going over a bunch of things I should know as a guy.” That included a list of sports facts and figures that Deleesa brought into the Circle in a notebook… but she proudly says the crucial Scottie Pippen answer she gave in this season’s trivia challenge was all her: “I pulled that right out of my own self. That was a major guess.” And she knows full well that if Trevor would’ve missed that question, he “would’ve been the next person blocked. Just like Emily.”

To survive all the way to the end, Deleesa had to flirt heavily with fellow contestant Chloe, who fell all the way in love with Trevor during their private chats. Deleesa admits she did feel a little guilty about that: “I know what it feels like to be a woman and to have butterflies when you talk to a guy. And just to find out that that’s not the guy that you were actually falling for… yeah, I felt bad. I do feel like she helped carry me throughout the game, I’m not gonna lie.” But she credits her respectful flirting style with keeping Chloe interested: “I think in the end, that’s essentially what kept her tied to him. Because she felt like he really respected her as a woman and a person, as opposed to a piece of meat.” 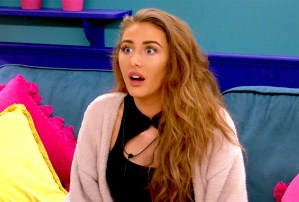 Flirting with a girl while posing as your own husband is an awkward position to be in… so did Deleesa ever find herself getting jealous of Chloe’s relationship with her husband? Not at all, she says: “I’m not really a jealous person at all. I’ve been with Trevor a really long time, since 2007. He’s not going anywhere. I’m not going anywhere. I’m not worried. Actually, it makes me feel good that other women are looking at my man like, ‘Ooh, he’s fine.’ Because guess what, girl? He’s all mine!”

At the finale dinner, when the players met face to face for the first time, Deleesa says she was most surprised by seeing Lee as River, even though she had a hunch that River was a catfish: “Lee is much older, and he’s not really into social media like that… He did so well! I was so shocked about that.” She adds that she “was terrified to see Chloe, because I felt so bad,” but Chloe was “such a sweetheart.” In fact, there were no hard feelings among the cast, she remembers: “We all understood it was a game, and nobody took anything really too hard.” The #CircleFam still stays in touch, by the way: “We have a group chat. We all talk all the time,” Deleesa reports. Just this week, “I was FaceTiming [Mitchell]. I FaceTimed Terilisha and Lee and Jack and Savannah, Khat also. We all have a special connection to each other in different ways.”

But now, Deleesa is back at home with her real family: husband Trevor and daughter Toni. “People are really invested in our family,” she says, adding that she and Trevor have a YouTube channel that fans can follow if they want to stay up to date. “We have our wedding on there, we have my labor and delivery on there, we have some serious conversations on there… We have a lot of good surprises coming up, for sure.” And yes, she’s following through on her promise to use the prize money to buy a house: “As soon as we came back and that money hit my bank account, it went for a down payment for a home.” Does that house have room for Chloe in it, though? “Yes, right in our bedroom, of course!” she says with a laugh. “That little red hot chili pepper.”

Drop your thoughts on Deleesa’s big win — and Season 2 in general — in the comments below.