The Circle‘s Season 2 players finally met face-to-face in Wednesday’s finale… and there were so many jaw-dropping surprises (just look at Courtney!) that we almost forgot to find out who won the $100,000 grand prize. And that was a surprise, too!

The finale opens with the five finalists’ last day in isolation, and a goodbye message from the ousted Mitchell. Trevor is depressed — his #Trifecta dreams are officially dashed — and Chloe is sorry Mitchell is gone… now that she’s seen how hot he really is. But before they leave, they have to rate each other one last time. There’s a clear split in strategy here: Some players (like Chloe) are voting for who they think deserves to win, and others (like Courtney) are voting for who they think would give themselves a better chance at winning. Either way, everyone seems to love River, though. 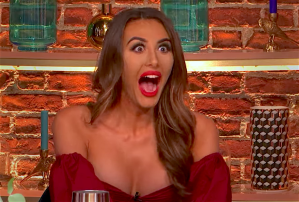 Now it’s time for them to meet face-to-face: Chloe gets dolled up to meet her boo Trevor, and she arrives first to a swanky dinner party set-up. She gets a message that Trevor is arriving next… and her jaw drops when Deleesa walks in. When Deleesa explains that Trevor is her husband, Chloe groans: “Now that makes it even more awkward.” But Deleesa reassures her that “there’s room for a third in our marriage!” (Did she check with Trevor first before making that offer?) Courtney arrives next, and he’s instantly impressed with the job Deleesa did impersonating Trevor: “You did that.” Chloe is still stunned (“I have been falling for a woman”), and she admits she didn’t think there were any catfish players at all: “I don’t get any of this tactic talk.” (Awww… one last time: Bless her heart.)

Next to arrive is River, aka Lee, and Courtney is shocked that his bestie is a catfish. (Deleesa kinda had a hunch, though.) Lee admits that he was the secret super influencer who blocked Mitchell, and Courtney admits he was the Joker. (The truth all comes out at once!) Then Lisa and Jack walk in as “John,” and everyone is just floored by all the shocking reveals. Lee emphasizes how hot Mitchell was in person, and Chloe is convinced: “I’m dibsing!” 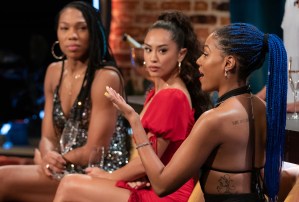 Host Michelle Buteau calls them up to the penthouse for a reunion before the final results. All the eliminated players are there — and Terilisha is awkwardly seated right next to Savannah, and is still insisting that Savannah threw her under the bus and lied about her. (These two are not hugging it out anytime soon.) Chloe admits it’s her own fault she fell so hard for Trevor, and a smiling Mitchell is open to giving Chloe another shot. Plus, to Lee’s delight, they get a video greeting from the real Lance Bass. (What, he couldn’t show up in person?)

Now the moment has arrived: Michelle reads the final ratings results. John finished fifth, and River (shockingly!) finished fourth. Courtney is third, which means it’s down to Chloe and Trevor for the win. And… Trevor wins! (I’m genuinely surprised!) Deleesa sobs as she tells Michelle that the prize money is “life-changing for us.” She FaceTimes with the real Trevor and their baby girl to share the good news… while Chloe and Mitchell conspicuously flirt in the background. Yep, looks like this Circle will just keep on turning.

Alright, it’s ratings time: Vote in our polls, and then hit the comments to share your thoughts on the final results. Plus, stay tuned to TVLine, because we’ll have an interview with Season 2 winner Deleesa, aka Trevor, where she answers all of our burning questions about life inside the Circle.