Ali Wong can officially refer to herself as one of the Paper Girls.

The actress/comedian has been cast in Amazon Prime’s series adaptation of the best-selling graphic novels by author Brian K. Vaughan and illustrator Cliff Chiang. 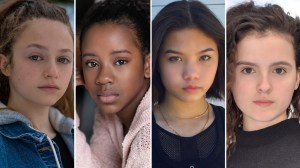 For the uninitiated, Paper Girls follows four young women — Mac (Fast Layne‘s Sofia Rosinsky), Tiffany (Cherish the Day‘s Camryn Jones), Erin (Altered Carbon‘s Riley Lai Nelet) and KJ (A Christmas Melody‘s Fina Strazza) — who, “while out delivering papers on the morning after Halloween in 1988, become unwittingly caught in a conflict between warring factions of time-travelers, sending them on an adventure through time that will save the world,” according to the official logline. “As they travel between our present, the past and the future, they encounter future versions of themselves and now must choose to embrace or reject their fate.”

Wong is set to play the adult version of Erin. In the series, “when the two Erins finally come face-to-face, they are forced to confront the gap between their childhood hopes, dreams and ambitions, and the reality of their grown-up life.”

As previously reported, Vaughn and Chiang are on board as executive producers. Additional EPs include Stephany Folsom (Toy Story 4), Christopher Cantwell and Christopher C. Rogers (Halt and Catch Fire). Folsom and Rogers will serve as co-showrunners.

Wong is perhaps best known to TV audiences for her role as Doris on the ABC comedy American Housewife. She currently voices the role of Bertie in the Netflix-turned-Adult Swim cartoon Tuca & Bertie (returning in June), and is set to star in and produce the Netflix dramedy BEEF, opposite Walking Dead vet Steven Yeun.

Wong has also headlined two stand-up comedy specials — 2016’s Baby Cobra and 2018’s Hard Knock Wife — and co-wrote, starred in and produced the romantic comedy Always Be My Maybe — all for Netflix.

Production on Paper Girls is set to begin in Chicago later this year.