Mom is giving at least one of its leading ladies the happy ending she deserves. 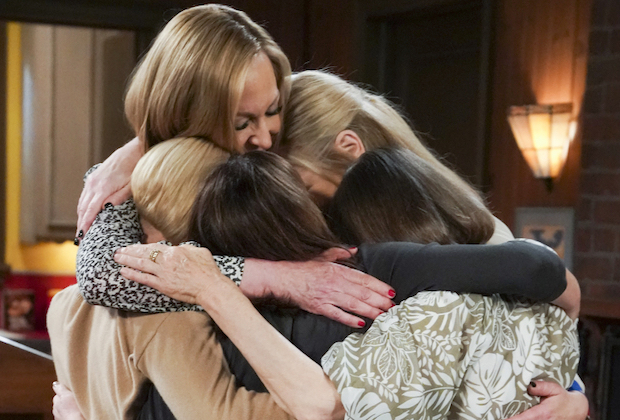 In the series’ penultimate episode, which aired Thursday, Jill found out that she’s pregnant. The positive test was revealed backstage at a black tie gala, where Marjorie was honored with the Napa Valley Community Hero Award. She’d been nominated by her previously estranged son Jerry (CSI‘s Wallace Langham), who made it just in time to hear his mother’s acceptance speech.

Afterwards, Andy arrived and surprised Jill. Bonnie had texted him that his better half wasn’t feeling well prior to finding out that Jill was with child. The father-to-be couldn’t have been happier when his girlfriend broke the news to him — so ecstatic, he was, that he didn’t think twice when he shared with Jill that he was a 14 lb. baby… and most of that was his head!

Jill’s desire to have a child has been an essential part of the character’s journey. In Season 4, she suffered a devastating miscarriage. She eventually fostered a teenage girl named Emily but lost her, as well, when Emily was reunited with her birth mom in Season 5. More recently, Jill attempted in vitro fertilization, which proved unsuccessful.

During the closing credits, CBS aired the following promo for Mom‘s May 13 series finale, featuring guest stars Melanie Lynskey (Two and a Half Men) and Rondi Reed (Mike & Molly). In the episode, titled “My Kinda People and the Big To-Do,” Bonnie gains a new outlook on her sobriety after dealing with “difficult news.” Plus, Jill and Andy take another big step in their relationship… which is spoiled in the following photos released ahead of air. You can also watch a sneak peek here.

Nowhere to be seen or mentioned is Anna Faris’ Christy, who left Napa for Washington D.C. in the final season premiere to attend Georgetown Law School. There has been no indication that Faris will return for next week’s grand finale.

What did you think of Mom‘s second-to-last episode? And what are your hopes for next week’s sendoff? Drop your thoughts in a comment below.