This week’s Handmaid’s Tale delivered June and Janine to the Chicago warfront in an unceremonious, decidedly unexpected way: soaked head-to-toe with milk and riding — as Janine pointed out — in a giant refrigerator.

Regardless of their mode of transportation, the two rogue handmaids managed to elude Gilead soldiers and hook up with a band of resistance fighters. By the end of the hour, however, it became clear that aligning with the rebels in question was better than being under Gilead rule… but not by much. Meanwhile, in Canada, Rita came face-to-face with both Serena and Fred Waterford and used some newly gained intel to make it clear she was no longer their property. (Read a full recap here.)

TVLine spoke with series stars Madeline Brewer and Amanda Brugel, executive producers Bruce Miller and Warren Littlefield and episode writer Jacey Heldrich about Episode 4. Read on for their perspective, starting with the question we couldn’t stop thinking about: 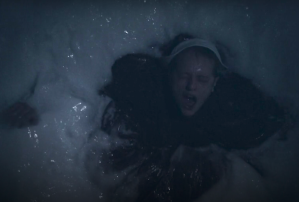 WHAT WAS THE ‘MILK’? | The liquid filling the tank in which June and Janine stow away to Chicago was supposed to be milk, but it really was “unsweetened vanilla soft serve mixed with water,” Brewer said. “They couldn’t do anything that would have a sediment that would fall to the bottom, and it had to be opaque enough so that our red robes could not be seen if we went under.” She adds that she and co-star Elisabeth Moss were in the tank for about 12 hours — “we’re just swimming around, it was really fun” — and that the day left a mark on her. Literally. “I had an allergic reaction to it,” Brewer added, laughing. “I got a rash on my skin. I was fine.”

THE HARD TRUTH | As their conversation turns into an argument en route to Illinois, Janine gets June to admit that she told the Eyes where to find the handmaids’ safehouse. “Janine sees the truth of June, and that’s why she’s stuck with her for so long,” Heldrich said. “Janine knows that June needed to accept the reality of the situation that she had guided them to.”

RITA’S REVENGE | The Waterfords’ former martha has conflicted feelings about the couple, Brugel said, in part because her entire purpose for the past several years has been feeding and caring for them. But during her visit to the detention facility, “she recognizes Serena trying to weave her web of ‘I miss you, I miss our friendship,’ and the word ‘friend’ is like a dagger,” the actress noted. “So while Rita is happy for her and happy for the baby, she slowly realizes that she’s been drawn back into this web and knows that finally she has the freedom to decide whether or not she wants to engage. And she doesn’t.” 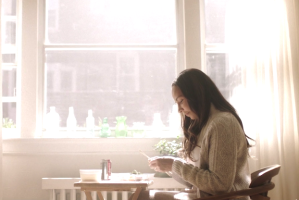 THAT VICTORIOUS SUSHI MEAL | Toward the end of the episode, Rita sits down to a meal of sushi, edamame and a diet soda — something she could never have done in Gilead. Rita is “quite a stoic character, and you get to hear her voice a lot more this season — which I appreciated,” Brugel said. “But it was also a bit scary, because I crafted a person that usually uses body language and facial expression to express herself. So suddenly having all this dialogue, and quite emotional dialogue, was challenging. So in that scene with the sushi, I went right back to quiet, very introspective Rita — but having the freedom to have her own meal at her little table.” She smiled. “It was a gift from the writers to be able to get that time with her and to celebrate a win.” 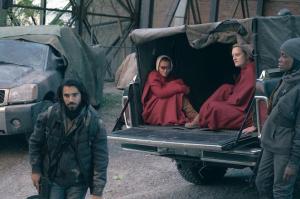 WELCOME TO CHICAGO | “We were so excited to get to Chicago,” Heldrich said. “We spent so much time researching it, and we spent so much time reading about Aleppo and Kabul. Like, what do these cities that have been decimated but they haven’t been really occupied yet, what is life like there? So our conception of Chicago is that it is not Gilead. They are rebels, but they’re more just still fighting a war.” And as such, Steven and his people “are Americans, and they’ve heard rumors about handmaids, but they’ve never seen a wife. They’ve never seen a handmaid… All they have are the kind of rumors that manage to trickle in through supply chains or through deserters.” It also becomes clear that June hadn’t considered that there might be groups other than Mayday involved in the fight against Gilead. (“She had more of a Star Wars image in her head,” Miller said, laughing.) “This season is about patience rewarded,” Littlefield added. “We’ve heard about the flare-ups in Chicago. We know that there’s a rebellion going on. Nick was sent to deal with that. Well, this year, now June gets to see for herself what that’s about and inserts herself in the middle of it.”

JANINE’S CHOICE | When June decides not to sexually service Steven in order to gain admittance to his group of fighters, Janine chooses to do so as a matter of keeping them both safe and fed. “At that point, Janine is just like, ‘This means nothing to me. I don’t feel morally corrupt by doing this. I don’t feel like I’m sacrificing any part of myself to do this. What I’m doing is solidifying our place in this camp. Getting us food. Getting us warm clothes. Getting us a place to sleep,'” Brewer said. “‘This is how I can help, because you care, and I don’t give a f—k. That’s what I’m going to do for you, because you’re my friend and I love you, and you can’t do it, and that’s OK. I’ll do what needs to be done.'”