How incendiary is Chicago Fire‘s finale? How will Torres get along with NCIS‘ newcomer? Will the Prodigal Son finally ‘fess up? Read on for answers to those questions plus teases from other shows!

What is one thing we can expect from Chicago Fire‘s season finale (airing May 26)? –Lauren
How about everything? “The last two episodes really are as big events as you can get in Chicagoland,” showrunner Derek Haas teases. “We really looked at them as two gigantic” installments with “a bunch of storylines coming together and some real finale trauma, for lack of a better word.” The season ender, in particular, will be “like one of the [past finales] that we’ve done, where there is some major spectacle happening. We didn’t get to do it last year, because the pandemic ended our season on, really, a pretty basic episode. So this year, we’re pulling out all the stops… For the last 10 minutes, it took writing it way back in January so we could get prepped for what we’re going to do. It’s quite a production.”

The Flash has really been developing Killer Frost and I’m loving it, but Caitlin Snow was left out of the way and it makes me sad. Any news on that character? –Clarice
I delivered your Q to Danielle Panabaker once the cameras stopped rolling, and she said that when it comes to Caitlin, “Episode 12 is one of my favorites this season — and one of the hardest. It’s a great Barry/Cisco/Caitlin storyline, and I’m excited for fans to see that one. But I think it will break their heart a little bit, too.” 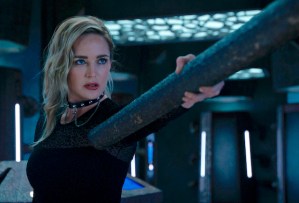 What can you tease about this season’s Big Bad on Legends of Tomorrow? –Derrick
For one, “[Co-showrunner] Grainne Godfree wanted a villain who danced. So we came up with a villain who’s not afraid to cut a little rug and even sings on occasion. But for sure, he’s our grooviest villain yet,” co-showrunner Phil Klemmer tells TVLine. But lest you think he’s all about fun musical interludes, Klemmer says that that this baddie has an agenda that’s similar to Marvel’s Thanos, in that when it comes to Earth’s population, as insane as that sounds, you can be like, ‘Yeah, we probably do have too many people.’ He’s intellectually driven to do something that on paper makes sense, but in practice is plain psychotic. He’s trying to save the world, to save humanity, but he’s doing it in a really ass-backwards way.”

Anything on Good Trouble? –Tina
Do Dennis and Davia’s swoon-worthy duets have you wondering if the show will ever do a musical episode? Us, too. So we asked Joanna Johnson about the possibility. “We talk about it all the time,” the showrunner admitted, but she has concerns. “I always worry that when shows do musical episodes, they’re near the end of their run. Unless they’re supposed to be that kind of a show. I always think, ‘Oh, that’s a Season 5 thing.’ And I don’t want to jump the shark.”

Quiero saber todo de NCIS. –Ana
Well, I can’t tell you everything, but here is something: When I spoke with Wilmer Valderrama, he had already worked with new arrival Katrina Law, who on May 18 debuts as NCIS Special Agent Jessica Knight. “She’s a lovely woman, very talented,” he reported, adding: “It’s fun to have new elements come into play, because that’s when things can boil up a bit. I think that she and Torres are go to have a lot in common. You’re going to see our characters dynamically be in a place where they can complement each other in the field.” 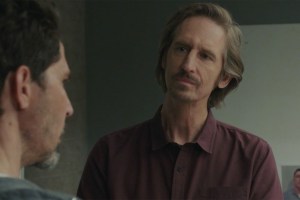 Where has Potter has been on Mayans MC? Seems strange that such a major storyline from previous seasons would just be dropped without mention. –Kevin
I have two words for you, Kevin: Keep watching.

Clinton has been gone from FBI: Most Wanted since this season’s fourth episode, and Nathaniel Arcand’s name isn’t in the opening credits anymore. Will we see him at least one more time this season? –Shon
I have two words for you, Shon: Stay tuned.

Is Lip Sync Battle coming back, or is it a victim of COVID and/or the constant changes at its home network? –Becca
Lip Sync Battle indeed had to press “pause” just as it was heading over to Paramount +; at this time, new episodes are not yet in production. 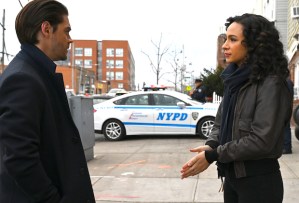 With only a few episodes left this season on Prodigal Son, will Malcolm actually get the chance to tell Dani how he feels about her — without getting interrupted? –Kristina
Rest assured that Bright and Dani will take a huge step forward in their relationship — with something we’ve seen a glimpse of earlier in the season….

Hi, Matt! Any chance you have some spoilers on The Handmaid’s Tale? Praise Be!  Blessed Be The Fruit! Under His Eye!  Etc…. –Beth
Though Hulu would pull a full Gilead on us if we gave away too much, we can say that the last few moments of Episode 5 — which drops May 12 — are integral to everything that follows for the rest of the season (or, at least, as far as we’ve seen).

I would love any spoilers you have on When Calls the Heart. Preferably anything on the love triangle with Elizabeth, Lucas and Nathan. –Monica
I relayed your question to cast member/co-EP Erin Krakow, and she wrote back that with the season finale now upon us (airing this Sunday), “It’s challenging to respond without spoilers, but I think it’s safe to say that choices are made, rings are removed, kisses are shared.” 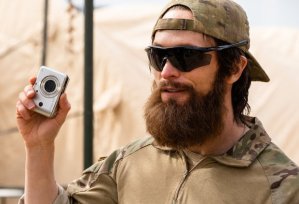 Somewhere underneath all this is Jonathan Tucker, we swear!

Do you know if we are getting a backstory on Debris‘ Bryan or why he needs to inject himself? –Sherrie
Indeed, the next episode of the NBC sci-fi drama “explores a piece of debris that ties into a memory of Bryan’s time in Afghanistan, where he met the young woman he keeps a picture of,” Jonathan Tucker tells TVLine. “As for the injections, unfortunately there is not a whole lot that can be said beyond recapping what we’ve seen so far… There is more discussion of the injections in Episode 11 and a brief questioning of how they might be impacting Bryan in certain situations. But as with all storylines created by the brilliant Joel Wyman, there is a reason for everything that happens to these characters.”

I’m trying to identify the actress who played Doctor Maggie in the May 2 episode of The Rookie…. –Gayle
That familiar face belonged to LisaGay Hamilton, who you perhaps know from The Practice, Men of a Certain Age or The First.

Will Legacies‘ Landon get his Phoenix powers back? –Mark
“Landon is still not a Phoenix,” exec producer Julie Plec points out, “but we’ll soon find he has developed a whole new skill set of physical abilities that Hope will find surprising — and will make him much better in a fight.”

What can you tell us about Lucifer 5B? –Paola
God hosts a great cookout. Also, apparently there is something specific Lucifer does in the bedroom that Chloe really, really likes.

If you want the Inside Line on a favorite show, email InsideLine@tvline.com! Questions left in Comments will not be read and may count against your final score. (With additional reporting by Vlada Gelman and Kim Roots)