The Haves and the Have Nots‘ end is nigh: OWN has announced that Part 2 of the Tyler Perry drama’s eighth and final season will kick off Tuesday, June 1 at 8/7c.

The remaining episodes “will see the wealthy residents of Savannah, Georgia involved in a true-to-life Greek tragedy as Judge Jim Cryer (played by John Schneider) and his rich friends” all find out “what happens when personal flaws go unchecked,” according to the official logline. “Karma has not been kind to the elite one percenters.”

In addition to the above promo, OWN has released the following first look photo featuring Crystal Fox’s Hannah Young and Angela Robinson’s Veronica Harrington. 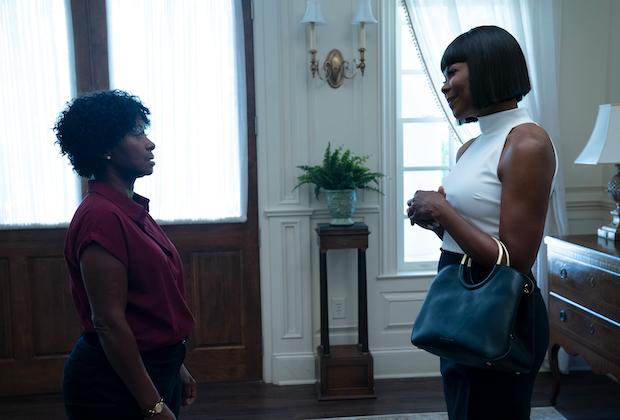 OWN confirmed in January that HAHN would conclude after eight seasons and 196 episodes. At the time, Oprah Winfrey put out a statement, which read: “The Haves and the Have Nots was the first scripted drama we aired on OWN, and to say it took off from the first day it hit the air is an understatement. It’s all due to one man’s creativity and very vivid imagination, a man I refer to as my ‘big little brother,’ Tyler Perry. I thank Tyler, the incredible cast, the tireless crew and every single viewer who watched with bated breath each week and tweeted along with us these past eight years. I will be watching alongside you all during this final season.”

Press PLAY on the trailer above, then hit the comments with your hopes for HAHN‘s remaining Season 8 episodes.