Warning: This post contains spoilers for The Circle Season 2, Episodes 5 through 8. Don’t read on if you don’t want to know!

We’re past the midpoint of The Circle Season 2… and a botched makeup job may have just cost one player a shot at the grand prize. (Emphasis on “may.”)

We’ve already recapped Episode 5, which saw Courtney become “the Joker” and warn newbies Mitchell and Khat about Terilisha and Chloe. Now as Episode 6 opens, Courtney also gets to select one of the influencers for the next elimination. It’s a big decision, and he has to twerk on it first, so we check in on Chloe, who’s soaking in the bath when Mitchell hits her up for a private chat. “I want Mitchell to flirt with me!” she shouts to the heavens, and her prayers are answered: He even invites himself into her bath, and she tells him it “all depends on how big you are” (!). But then Trevor pops up for a private chat, and Chloe swiftly ditches Mitchell for him, daydreaming about going to Bali with him on a “baecation.” Sorry, Mitchell, you just can’t measure up to… a woman pretending to be her husband.

After a game where the players try to make pancake art — they’re all pretty bad at it; is this a stealth Nailed It! crossover? — Courtney’s choice of influencer is revealed: He picks River. Now it’s ratings time again, with River, Mitchell and Khat all immune from elimination. Terilisha is convinced Emily is the Joker (nice work, Courtney!) and tells Khat so in a private chat: “Emily, my good sis, you have officially f–ked up.” But when the ratings roll in, it’s Terilisha at the bottom, followed by Lance, Emily and Trevor. The top-rated player gets to be an influencer with River… and Courtney edges out Chloe for the power position. (“Is this what it feels like when people want their Super Bowl team to win?” he wonders. “Because I am hyped.”) 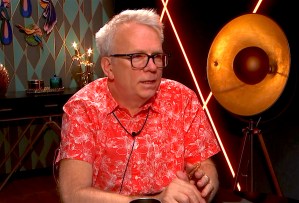 Courtney and River head to the hangout to pick who’s getting blocked, and they’re on the same page, quickly agreeing that Chloe and Lance are safe. River admits to some doubts about Emily, and Courtney straight up says Terilisha wants to get rid of him, so she’s a threat. We have to wait until Episode 7 to see who they ended up blocking… and it’s Terilisha. On her way out, she goes to see Chloe — and very awkwardly, Chloe left out her drawing accusing Terilisha of being a catfish! (Oh, Chloe. Never change.) When Terilisha’s exit video pops up, the players realize they’ve only eliminated real people so far, which has them all extra paranoid about who’s a catfish. Khat is a huge *NSYNC fan, so she chats up Lance and quizzes him about a black leather jacket he wore on tour years ago. Lance’s answer has Khat convinced: That’s not really Lance.

More catfish are about to be exposed, too, because they play a “Glammequins” game where they glam up a mannequin head with makeup to look like themselves, with Queer Eye‘s Jonathan serving as judge. Jack is instantly worried… and he should be. Even though she’s supposed to be a #RoseAllDay sorority girl, “Emily’s” head comes out looking like a hot mess, while Mitchell’s is surprisingly flamboyant, and Trevor’s is maybe a little too good for a single dad? Speaking of him, he gets roped into a “bro chat” by Mitchell, and when Trevor says he and Chloe have something going, Mitchell gallantly offers to step back on her. (Not so gallantly, he credits it to, ahem, “bros before hos.”) Then when Chloe slides into Mitchell’s DMs for more flirty fun, he keeps it polite and friendly, and she’s crushed to be #FriendZoned. At least you still have… well, you don’t actually have Trevor, do you? 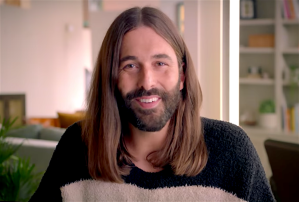 Jonathan from Queer Eye is ready to judge the “glammequins”… and it’s very revealing! He’s “impressed” by Trevor’s makeup application, which raises a few eyebrows, and he calls out Lance for a sorry head of hair that looks like it “survived a lawn mower attack.” Then… it’s Emily’s turn. Jonathan’s voice turns grave: “Emily, this was a struggle.” Every other player can see what Mitchell sees: “That don’t look like a 21-year-old girl did that.” Trevor wins — don’t celebrate, Deleesa! You’re blowing your cover! — and Jack is devastated (and in tears, actually) after seeing his dreams of winning crumble before his eyes. There’s more bad news: An alert tells them that not one but two players will be blocked at the next elimination.

Episode 8 opens with Jack sweating bullets while BFFs River, Chloe and Courtney share their doubts about Emily’s identity in a “Cardashian Love” group chat. Another game pops up to sow even more chaos: It lets the players ask each other questions anonymously. Mitchell asks Emily for her top five makeup brands (ha!), and Jack scrambles to his makeup kit before naming Laneige (OK), Maybelline (hmmm) and something called “Collection Co.”? River comes right out and asks Trevor if he’s a catfish, and Trevor barks back at him, insisting he would never lie: “#IHaveMorals.” (Alright, settle down, Deleesa.) 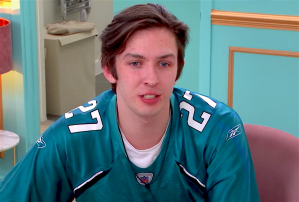 With more ratings on the horizon, the players do some last-minute alliance building: Emily actually wins Mitchell back a bit, and Khat plays nice with Chloe, but “if I have to chop her ass off the block, I will.” Ratings time arrives, and Khat and Trevor seem to have a strong bond, rating each other first. (Plus, Mitchell seems to have sussed out that Courtney is the Joker. Check out the big brain on Mitch!) The results are in, along with another twist: There will be no influencers this time. Instead, the bottom two in the ratings will be automatically blocked. Chloe is rated at the top, followed by Khat and River. Trevor and Mitchell come next, leaving Courtney, Emily and Lance teetering on elimination. Courtney finishes sixth, which means Emily and Lance are going home. The Circle is now down two catfish.

But wait! Can we interest you in one more twist? Jack (aka “Emily”) and Lisa (aka “Lance”) go to see one player on their way out, and they… end up in a room with each other? An alert tells them they’re being given “a second chance”: a new fake profile to play together as a team. They’re given the photo of a cute old white guy. Game on!

So how will Jack and Lisa’s new catfish character alter the game? And will Trevor’s makeup win sink his chances? Vote for who you think should win the whole thing, and share your Week 2 thoughts in the comments.