Warning: This post contains spoilers for The Circle Season 2, Episode 5. Don’t read on if you don’t want to know!

Being in “the Inner Circle” certainly has its privileges, doesn’t it?

The Circle kicked off Season 2’s second batch of episodes on Wednesday with a serious game-changer: Because Savannah chose Courtney as her pick to win on her way out, he was given access to the sci-fi looking “Inner Circle” room as well as an alternate identity: the Joker. (Oooh!) Two new players are entering the Circle, and Courtney can chat with them anonymously as “the Joker” before anyone else can. Well, that’s quite an advantage! Let’s meet the two new contenders he’ll be chatting up: 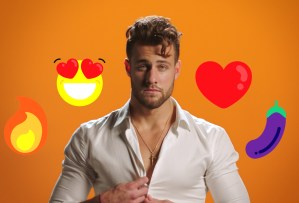 * Mitchell, the brother of Season 1 contestant Ed (the one who brought his mom along). He’s a real bro’s bro, a workout fiend and a ladies’ man… but he’s also a virgin. Right away, he thinks Emily is hot, but he has doubts about Lance’s identity.

* Khat, a pro volleyball player with lots of energy. (It’s nice to have two new players who are actually playing as themselves.) Her catfish alarm starts ringing when she looks at Emily’s profile.

The two newbies are chatting with each other when Courtney enters the chat as “the Joker.” They’re told it’s an existing player who’s here to share information with them, and (in a stroke of genius!) Courtney decides to write in a girly voice like he’s Emily. “This is a dangerous game,” he warns them, with “lots of lying,” calling out Terilisha and Chloe directly. When he exits the chat, Mitchell and Khat are left reeling. Welcome to The Circle!

They meet the rest of the gang via a “Two Faced” game (heh) where the players share two photos of themselves, one naughty and one nice. Mitchell dives right in with a photo of himself jumping naked into a lake, buns out and proud. Chloe is instantly smitten (“Trevor who?”) and openly flirts with Mitchell in the group chat, jumping up and down on her bed in celebration when he says he’s single. Well, at least he’s real, right? 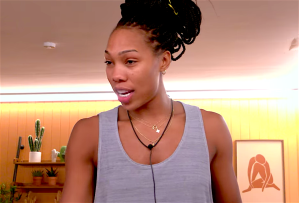 Trevor sees an opportunity and opens up a “My Beautiful Black Queens” chat with Terilisha and Khat, asking them for advice on raising his baby daughter. (Laying it on a little thick there, aren’t you, Trev?) Khat asks about the turmoil the Joker mentioned, and Terilisha lays the blame on “a now Blocked Player” who shall remain nameless. (Chloe is starting to suspect Terilisha is a catfish, by the way, bless her heart.) Later, Mitchell hits up Emily for a private chat, which gets Jack sweating: “Am I gonna have to flirt?” He is, and does, even complimenting Mitchell’s “cake” (!), and Mitchell falls for all of it, hook, line and sinker.

The Inner Circle isn’t done with Courtney just yet, though. He’s called back and told he has one more mission: He has the power to choose one of the influencers for the next elimination. Whoa… the tables have definitely turned around here.

Who will Courtney choose as an influencer? What do you think of newbies Mitchell and Khat? And who’s your pick to win the whole thing? Vote in our poll, and check back with TVLine this weekend when we’ll recap the highlights from all four of this week’s episodes. (But keep your discussion in the comments here to just Episodes 1 to 5, please.)