Warning: This post contains spoilers for The Circle Season 2, Episodes 1 through 4. Don’t read on if you don’t want to know!

Who knew The Circle could be just as strategic — and just as underhanded — as Survivor?

In Season 2’s first four episodes (which debuted this Wednesday), we’ve seen a much more cutthroat style of gameplay emerge, compared to Season 1’s lovefest. One feud in particular has torn the group apart, with nasty accusations flying back and forth and players forced to choose sides. Let’s take a quick look at the highlights from Week 1… and then you’ll have a chance to make your voice heard in our polls.

Episode 1 introduces us to the first eight players, including five real people — Savannah, Bryant, Terilisha, Chloe and Courtney — and three catfish: “Emily,” played by Jack; “Trevor,” played by his wife Deleesa; and “River,” played by the much older Lee. Everybody gets along pretty well from the start, and Chloe (a veteran of Netflix’s Too Hot to Handle) takes an instant liking to Trevor. A few suspicions are raised, though, and when the first ratings come through, Savannah and Terilisha are named “influencers,” with a chance to decide who gets “blocked.” (For a full recap of the Season 2 premiere, click here.) 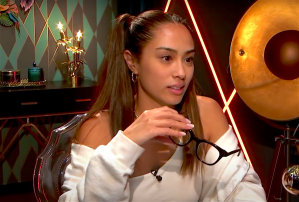 The influencers also get a chance to save one player, and Episode 2 opens with Terilisha saving Emily and Savannah saving Trevor. That leaves Chloe, Courtney, Bryant and River on the chopping block, and after a poetry slam where the ones in danger pen odes to the influencers (gag), Savannah and Terilisha head to the hangout to decide who goes. They both agree that Courtney and River should stay, so it’s down to Chloe or Bryant. Savannah is willing to dump Chloe… which makes Terilisha doubt her #GirlGang loyalties. The two are clearly not on the same page, and the discussion turns borderline hostile before they come to a final decision.

Savannah sticks Terilisha with delivering the bad news: It’s Bryant. He just breathes through it — like he always does — while Lee sobs at the news. (It’s just the first elimination, buddy!) Bryant is now blocked, but he can go see one other player on his way out, and he chooses River… who, of course, is really Lee. He doesn’t even seem to mind, though? (“We’re all playing a character.”) They hug it out, and Bryant says he’s already a winner anyway. Aw, what a nice guy. He didn’t stand a chance. The episode ends with a shocking reveal: A new player is arriving tomorrow… and it’s Lance Bass from *NSYNC?!?!? Chloe doesn’t know who he is, clearly, because she says “maybe Trevor has a little bit of competition.” (No, he doesn’t. And he doesn’t even exist, for that matter.) 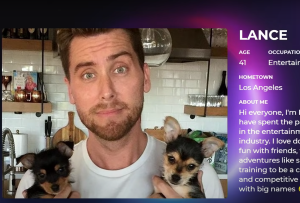 We learn in Episode 3 that it’s not really Lance: It’s his personal assistant Lisa, who’s worked with Lance for the past 14 years. (So now fully half of the players are catfish? Who can we trust in this crazy world?) But a few other players don’t recognize Lance, either, and others are turned off when he says he’d use the prize money to fund a new *NSYNC tour. (Um, we don’t think that’s how tours work?) But the big story is the fallout from Bryant’s elimination: Terilisha pushes the blame on Savannah in a group chat, while Savannah insists it was “a joint decision.” Then Terilisha pulls aside Chloe and Emily for a “True Colors” chat and tells them that Savannah wanted to get rid of one of them. Woo, the claws are out!

It gets really ugly during a game of Truth or Dare: When Terilisha is asked who the biggest game player is, she says Savannah, and when Savannah asks if she sees her as a threat, Terilisha fires back: “You definitely didn’t keep a promise.” (Oooh!) Then Savannah is asked who she trusts least in the game. Hmmm… we’re left on a cliffhanger, but Episode 4 reveals her answer: “Terilisha.” She adds: “She’ll say anything to get you to like her, but when she’s an influencer, she won’t save you.” (Ouch!) Terilisha responds with “#Pathetic,” and the two exchange sharp barbs while the others look on in horror and amazement. Courtney cheers on his girl (“Savannah, collect that wig!”) while Jack, aka “Emily,” observes: “Terilisha may be a vegan, but it’s beef tonight for dinner.” 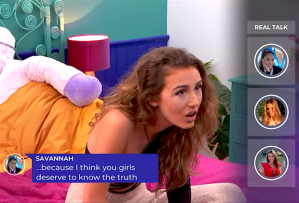 The next day, the battle lines are clearly drawn: Trevor tells Savannah he’s got her back, while Terilisha tries to reach out to Courtney, but they just fake their way through a cordial conversation. Savannah tries to get Chloe and Emily on her side with a “Real Talk” private chat, telling them bluntly, “I DO NOT trust Terilisha.” Emily won’t take a side, which infuriates Chloe, but they both eventually tell Savannah they’ll support her against Terilisha. Chloe notes, though: “I will be gobsmacked if they believe anything I just said.”

Well, she was right about that: It’s time to rate each other again, and Chloe and Emily are named influencers, with Terilisha and Savannah now ranked at the bottom. Chloe and Emily — who are besties already — go through the candidates, and it comes down to the two troublemakers… and they block Savannah. (Guess they’re #TeamTerilisha after all.) On her way out, Savannah is told to visit the person she thinks she should win, and she picks Courtney, warning him about Terilisha and Emily and telling him “you have to be a sneaky bitch” to win. But! In a final twist, because Savannah picked him, Courtney is told he now has access to “the Inner Circle” (??), and he’s summoned to a spaceship-looking room with a bunch of big monitors. (His reaction is perfect: “What in the intergalactic flawlessness is this, honey?”) We’ll find out the answer to that question… next week!

So whose side are you taking in the Savannah/Terilisha throwdown? Who’s your pick to win so far? And what the heck is “the Inner Circle”??? Vote in our polls, and drop your Week 1 thoughts in a comment below.