Welcome back to The Circle! Wink emoji, heart emoji, send.

The Netflix reality competition is back for a second season, and it really is the perfect show for these pandemic times: Players are isolated in separate rooms and only allowed to communicate via text message, without ever seeing or touching each other. (You know, just like your life the past 12 months or so.) But that opens the door wide open for all kinds of fakery… and yes, Season 2’s pond is fully stocked with a bumper crop of catfish.

Wednesday’s premiere opens with host Michelle Buteau telling us this season is “more strategic than ever,” so let’s meet our first eight players competing for the $100,000 grand prize:

* Jack, 20, an astrophysics student who’s playing as his #RoseAllDay girl pal Emily. He researched his role by binge-watching chick flicks and Selling Sunset, and wants to go down as “the biggest villain in The Circle history.” Noted! 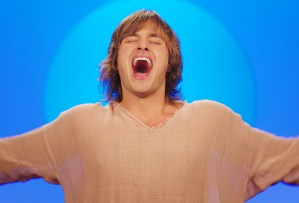 * Bryant, 26, a shaggy-haired New Age guru who prays over his water before drinking it and says things like “I’ve lived many lifetimes” and “golden bubble of love.” Oh, did we mention he teaches breathwork for a living?

* Delessa, 32, a mom from the Bronx who’s playing as her husband Trevor and pretending he’s single. (“Single dads, they get all the ladies.”)

* Terilisha, 34, a substitute teacher with blue braids — who came up with her own mathematical theorem that’s named after her! She claims to have a highly attuned “catfish meter”… and yeah, we’re gonna put that to the test.

* Lee, 58, an author from Texas playing as his friend River, a young gay hippie with a huge ‘fro of hair. Lee is a veteran catfish: He’s written books under a female pen name for years. (“As a writer, I guess that makes me a professional liar.”)

* Courtney, 28, who hosts an online celebrity gossip show… but doesn’t want the other players to know that. He claims he’s a barista, so we guess that makes him half a catfish? (“The most common misconception about me is that I’m a bitch.”)

And finally, a familiar face…

* Chloe, 21, who competed on the Netflix dating show Too Hot to Handle. She’s British, but she’s not a great advertisement for the UK educational system. She thinks she’ll be able to get along with the Americans because “I don’t think England and America have ever had a war.” (Thinking face emoji.)

(Note: For the players who are catfishing, we’ll mostly be referring to them by their catfish names, because that’s how the other players know them, and it’s just easier that way. Got it? Good.) 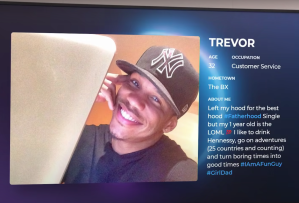 The players all start chatting, and a couple of the girls recognize Chloe right away. Trevor brings up his daughter, but the way he does it raises some red flags for Terilisha: “That doesn’t sound like something a man would say.” Chloe falls for Trevor immediately, though, saying he’s “a sort,” which is “British for hot.” They play a get-to-know-you game, and Jack (who’s playing as Emily) finds himself crushing on Savannah. Don’t blow your cover, bro! Plus, Bryant is rubbing people the wrong way with his cheesy, flower-power energy… even if that’s exactly who he is, really.

Emily sets up a “Girl Group” chat with the other three ladies, and Savannah admits to having some doubts about Trevor. That actually makes sense to Chloe: “Girls, I attract dickheads, it’s a fact.” (She’s not dropping her crush on him, though.) But later, Trevor reaches out to Savannah for a private chat, and they bond over the fact that Savannah was raised by a single mom, so she starts to trust him. (Even though she shouldn’t!)

Enough chit-chat: It’s time for the season’s first rating, with each player ranking their peers 1 through 7 and the top two becoming “influencers” who will decide who gets “blocked,” aka voted out. Trevor and Savannah both rank Bryant near the bottom, and sure enough, he ends up last, behind Emily and Chloe. River and Courtney tie for fourth, and Trevor is in third… which makes Savannah and Terilisha influencers. Before they block someone, though, they can each vote to save one player. Who will it be? “I’ve got nervous wind,” Chloe says after burping. You and us both, Chloe.

Alright, #CircleFam, it’s your turn: Give the premiere a grade in our poll and vote for your favorite player so far. Check back with TVLine this weekend when we’ll recap the highlights from all four episodes so far — and keep your comments here about the premiere, please, with no spoilers beyond Episode 1.