We knew this day would come.

Wednesday’s The Masked Singer marked the end of a short but enjoyable era: It was the final episode for which Niecy Nash was guest host. And I’m going to miss her. She was fun, funny and, as far as I know, unencumbered by recent controversies.

This week’s unmasked contestant also happened to be the wild card that was introduced this week. And after we recap the performances, you’ll understand why. Away we go! 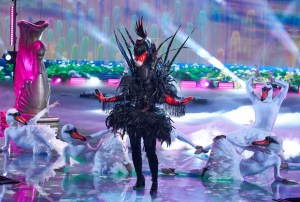 BLACK SWAN | By this point, we all know who the stronger vocalists are in the group, and Black Swan continued her streak of excellent performances with a vocally gymnastic take on Whitney Houston’s “How Will I Know?” Clues included: 10 10 10, leaves, a black cat, Montana, a fingerpainted stegosaurus (?) and a unicorn, which commemorated a close friend who passed away. (My guess: “Leave (Get Out)” singer JoJo.) 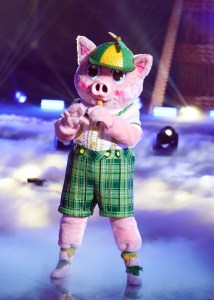 PIGLET | Keeping with the “stronger vocalists” theme, Piglet next turned in a really touching, well done version of Lukas Graham’s “7 Years.” His clue package was all about how a woman he met years ago “rescued me” and gave him a “brand-new start.” Sounds like the person in question is his wife or girlfriend, because he mentions that he’s a “family man” now because of her. Other clues included: a lei, a genie’s lamp, palm trees, 1DR and dog tags with a P pendant, which “represent the most important thing in my life.” (My guess: 98 Degrees’ Nick Lachey hey hey.)

CRAB | The most notable aspect of Crab’s appearance in this week’s episode was the way he had to be escorted off stage during the judging because he was having trouble breathing in the costume. But the crustacean was fine, thank goodness, and returned to hear Ken & Co. tell him what they thought of his take on Rick James’ “Give It To Me Baby.” (For what it’s worth, I thought it was pretty lackluster, which makes sense if he was sucking wind in there the whole time.) Clues included: mac and cheese, Big Ben (for BB?), references to having a passion for cooking and a bowler hat which he wore “as much as I could” in homage to Sammy Davis Jr. (My guess: “My Prerogative” singer Bobby Brown.) 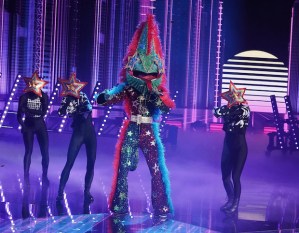 CHAMELEON | Wow, Chameleon’s performance of Dead Prez’s “Hip Hop” was flawless, wasn’t it? And it just made me feel more sure that he is who I think he is underneath those googly eyes. Clues included: references to a “little chameleon” in his life, martial arts, five clocks that read 3:46, a rocket and Buffalo wings. Plus, Cluedle-Doo told us that the Masked Singer set “isn’t the only studio he frequents.” (My guess: “Black and Yellow” rapper Wiz Khalifa.)

BULLDOG | At first, I thought the latest wild card contestant might be Brooklyn Nine-Nine‘s Terry Crews, based on the B99 and football clues in his set-up video. But when he broke out into New Edition’s “Candy Girl,” I just didn’t think the voice matched. And though the singing was nothing special, he moved with ease, so then I was thinking maybe an athlete? Clues included: “I make moves on every green field with panthers and pitbulls, running fast like a human torch,” “super” written on a bowl, the Skeleton, a reference to being the “sexiest dog alive, people,” and “Live from New York, it’s Saturday night!” which apparently was a reference to his house in the Empire State and his love of live comedy. (My guess: Eh, it’s likely not him, but I’m stumped: Crews?)

THE UNMASKING | Bulldog was unmasked — Niecy got to choose! — and the canine was revealed to be regular Masked Singer host Nick Cannon, who will resume his duties in the next episode.

Now it’s your turn. What did you think of the episode? Press PLAY on the video below to watch Cannon’s unmasking, then sound off in the comments!