Lizzie may still be adjusting to life in Virgin River, but actress Sarah Dugdale feels right at home on the Netflix drama, which is returning for its third season… not soon enough.

“Season 1 hadn’t come out yet when I booked the role, but they gave me screeners to check it out,” Dugdale tells TVLine. “Watching it, I was like, ‘This is something special.’ It’s not just a medical drama or a small town story. There are so many elements to it.”

Virgin River: Here's Everything We Know About Season 3 (So Far)

And one more element was thrown into the mix when Dugdale’s character, the 19-year-old niece of local busybody Connie, was introduced in Season 2.

“She’s definitely a fish out of water, being this LA girl from a privileged background stepping into a much simpler existence,” Dugdale says of Lizzie. “It was cool to see people’s reactions to Lizzie, especially the audience, because she is so bold and so brash and can kind of come across as a little manipulative. It was fun to see people’s initial reactions, and then to see them warm up to her throughout the season.”

Dugdale credits Lizzie’s growth with showrunner Sue Tenney’s commitment to developing Lizzie — who is only 14 in Robyn Carr’s Virgin River books — as a multi-dimensional character. “She isn’t just this mean girl, or this party girl,” Dugdale says. “She’s so much more complicated than that, and she easily could have been written as just a foil to Ricky. But they’ve really fleshed her out and brought out this playful side to her that she has shied away from.”

Speaking of Ricky, Dugdale also acknowledges that Lizzie’s “sweet, innocent” courtship with Grayson Gurnsey’s character helped to bring out Lizzie’s “playful” side. “I just love how organic it feels,” Dugdale says of the relationship. “It never felt like they were forcing these two characters together. I think Lizzie was a bit more manipulative in the beginning. She had an agenda with Ricky, like using him to get alcohol or for rides. But she was surprised by the connection they ended up having. I don’t think she saw him and thought, ‘Here’s the guy for me.’ He really grew on her. I love that they teach each other things and balance each other out.” 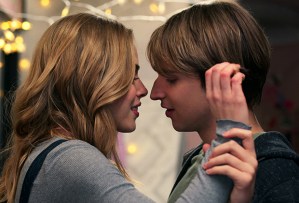 Following the couple’s decision to carry on a secret Romeo and Juliet-style love affair in the second season finale, Dugdale says she’s excited to see how that will actually work out, given the Connie of it all.

“It’s not a love triangle, but there’s definitely a triangle with Lizzie, Ricky and Aunt Connie,” she explains. “Connie is such a part of their relationship, not by Lizzie’s choice. In Season 3, we’ll hopefully get to explore her presence, even when she isn’t there; the complications that brings up for them; and their ability to stay present together when there’s all this other stuff going on.”

But it isn’t all bad blood between Lizzie and Connie — at least behind the scenes. “Connie is actually one of my favorite characters,” Dugdale says. “I love how different she and Lizzie are generationally, but they’re both so stubborn and strong-willed. You can tell they’re family.”

Overall, Dugdale sees Lizzie as someone who came to town with no real plan for the future. Fortunately, “Virgin River is a place that lets you slow down and breathe and relax and be present, and that’s what Lizzie needs. Her time in the town will be very beneficial to her as she starts to become more involved and interact with more people and make the town her home.”

“There are still so many things I want to know about her,” Dugdale adds. “I want to know about her relationship with her parents, more of her background, how it was growing up for her. I love how she’s written, and that we find out little bits about her throughout the series. I’ve never had the opportunity to stay with a character this long before, so it’s been really beautiful to build on her with each episode.”

Your thoughts on Lizzie’s time in Virgin River? Hopes for Season 3 in general? Drop ’em all in a comment below.