Things I learned from this week’s Men in Kilts: It takes nine yards of fabric to make a kilt. Herding sheep is exactly as hard as you’d think it would be. And anything — even a love poem to a haggis — can be entrancing when crooned by a well-lit Scot with a gorgeous vista behind him.

Episode 5 dips into Scottish culture and tradition. Because, as Graham reminds us near the top of the ep, “Few countries rival Scotland when it comes to tradition.” The installment’s throughline feels a wee bit generic — after all, couldn’t pretty much any of what’s been covered in Episodes 1-4 fall under this category, as well? — but nevermind that now, because it’s time to go shopping! 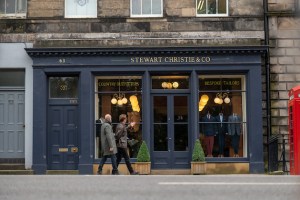 The men visit Stewart Christie & Co. in Edinburgh, Scotland’s oldest tailor shop, which was established in the 1700s. “That’s a couple of years before you were born,” Sam jokes to an unamused Graham. Inside, creative director Vixy Rae speaks with pride about how the shop still makes full, bespoke suits on the premises. We learn the 9-yard fact, and then Graham and Sam get fitted for their own suits. Graham winds up in olive. Sam’s is gray. And I wish I knew more about fabric/fashion/suits/anything-but-yoga-pants to give you a better sense of the outcome, but know this: The guys look dapper.

Next, we’re off to a Gaelic lesson with a woman named Morag McDonald. The outing takes place in a garden absolutely commandeered by midges, or tiny biting flies, and Sam cannot go more than a second or two without swatting at his face. The bugs don’t seem to bother Graham or Morag that much, though, so the segment proceeds with Sam losing his stuff while the other two focus on a language that only a small percentage of the world’s population speaks.

We do find out that the Gaelic that Sam and Graham spoke in Outlander was learned phonetically, and that Graham needed “dummy boards” — or cue cards — to get through his lengthy Gaelic speech in Season 1’s “Rent” episode. (Ye ken? The one where he ripped Jamie’s shirt open at the end, showing everyone his scars?) But because Graham wears glasses, and Dougal doesn’t, the cue cards had to be written in RATHER LARGE LETTERS. Sam is tickled by this memory. Graham, less so.

[Said in the style of En Vogue’s “My Lovin’ (You’re Never Gonna Get It)”:] And now it’s time for a Haggis breakdown! Sam stands in the outdoors, recites the last two stanzas of Robert Burns’ “Address to a Haggis,” and… alrighty then! We’re off again.

The guys stop by another, less-pest-filled garden to chat with Claire Marcello, the herbalist who consulted on Outlander‘s first season. “Before pharmaceuticals, knowledge of herbs was a matter of life or death,” she tells them, pointing out some plants that were featured on the series. Sam balks a bit at the lavender — and if you’re counting, that’s the second Black Jack rape reference in two weeks — then teases Graham about getting an herbal cure for baldness. (Apparently onion juice is a good way to go.)

On the way to do some basket-weaving, Sam tells us that his uncle weaves baskets. In fact, he made the wicker stag and cross that were seen — and set ablaze — in Outlander Seasons 4 and 5, respectively. When it comes to actually trying their hands at weaving, however, Graham does a tidier job. 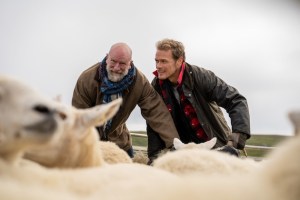 Then all that’s left is for Graham and Sam to try their hand at sheep herding with some crofters on the Isle of Skye. As we’ve come to expect from this show, there is a lot of goofiness — running around, waving of staffs, Sam falling on his face at one point — as the pair works with the crofters’ sheepdogs to corral the wooly beasts. Eventually, it happens. (My favorite part? When one of the crofters good-naturedly utters, “Christ above!” at all of the histrionics going on before him.)

Then another of the crofters, Donald MacLeod, shears a sheep by hand with ancient-looking clippers. And Sam and Graham retire to a nearby tractor, where they share their usual end-of-episode dram. Sam also serves up a bunch of compliments to his co-star… who is appropriately suspicious. What in the world might Sam be planning?

Now it’s your turn. Sound off in the Comments below!