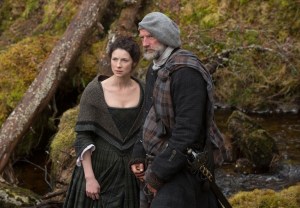 December 24th, 9 pm Eastern Standard Time. From here on in, I shoot without a script —

In my defense, this week’s episode of Outlander and the Tony-winning Broadway musical with which it shares a name both center on a ragtag group full of drama and feature a catchy song, complete with hand motions, sung ’round a long table. Only the TV series, however, can boast (repeatedly!) shirtless Jamie, hot pee as a household solvent and “Your mother” jokes in Gaelic.

“Hot what now?” you ask? Dinna fash; it’ll all make sense as we review what happens in the drama’s latest hour.

CLAIRE LAWYERS UP | Claire hasn’t made many pals while accompanying Dougal’s Rent Tour 1743, save elderly lawyer Ned Gowan and, of course, Jamie. The former becomes a fast friend after they recite John Donne poetry together and she gives him jimson weed to smoke to ease his asthma; the latter is the only member of the core gang who shows her any kindness – though he informs her that the men still don’t trust her and that he’s well aware that she’s got secrets. Meanwhile, I am well aware that Caitriona Balfe is bringing Belle back with that gorgeous fur-lined coat, and her loose, soft curls are perfection.

In the first village Dougal’s group visits, the tenants line up to pay rent. Ned accepts their payment, which often comes in the form of livestock, and Dogual invites the locals to drink with him at a nearby tavern that evening. Bored, Claire wanders off and finds a group of women singing around a table and is soon drawn into helping the ladies of the village work some wool. The mass of fibers is slapped onto the table and doused in… “Hot piss,” one of the women helpfully provides as Claire wrinkles her nose. (Apparently, urine sets the dye.) But still, the assemblage is rather welcoming and Claire joins in, happy that no one is thrusting a half-skinned rabbit under her nose or threatening to do her bodily harm. PEE YA LATER | That ends when Angus catches her, mid-stream, as she’s helping fill a bucket for the next round. Soon, she’s being hauled out by the arm. And when she tries to liberate a rent payment (read: goat) so a hungry family can eat, Dougal is not pleased. Their argument captures the notice of a British man who asks if Claire needs help; the Scots tell him to take a hike and, because he’s far outnumbered, he does.

That night at the tavern, Dougal gives a rousing speech in Gaelic. It culminates with him ripping the shirt off his nephew and showcasing his scarred back. Normally, I’d be all for anything that disrobes Jamie in an efficient manner, but 1) I wince every time I see his scarred back, and 2) the move clearly doesn’t sit well with young Mr. MacTavish – or Claire, when she sees how upset he is.

After watching this show in a few villages, and seeing how eager it makes tenants to put coins in a bag passed around after, Claire deduces that Dougal is raising cash for himself on the sly. She voices her suspicions to Ned, who won’t confirm or deny – but he remarks that she’d make a good lawyer. Too bad women aren’t allowed to study law, and “It’ll be a few centuries before that happens,” he says as he walks away, chuckling. “Only two,” she notes aloud. (Heh.)

Although I love Claire to pieces, girlfriend has gotta lighten up about jumping to conclusions, particularly about business conducted in a language she doesn’t speak. Even Jamie drops his bemused expression to drop some Scottish science on her arse by warning her not to judge things she doesn’t understand. “Stay out of it, Claire,” he warns.

THE REBEL ALLIANCE | Because here’s what’s really going on, as Claire learns by the end of the episode: Dougal is, indeed, raising cash out on the road. But instead of lining his own pockets, he’s socking away money to fund an uprising that aims to restore power to Charles Stuart, pretender to the British throne. Stuart’s supporters call themselves Jacobites, and the British are really not fond of them.

But as Claire’s flashbacks to hanging out in Rev. Wakefield’s dusty study show us, she knows that the upcoming Jacobite uprising will fail miserably, killing thousands of Highlanders and essentially ending the clan system in Scotland. But she can’t say anything to stop it, can she? This is the dilemma she’s likely pondering in her room at an inn one night when she hears someone outside her door. Claire grabs a candlestick and prepares to crack it over the head of the intruder, but when she yanks the door open, she just trips over Jamie. Again. We know you have to lay low on account of the price on your head, Jamie, but you don’t actually have to stick so close to the floorboards. He’s sleeping outside her door to make sure that drunk dudes don’t try any funny business. (Hear that, Hilton? I couldn’t even get extra towels during my last hotel stay!) Anyway, the gesture is sweet but nowhere near as quaint as his reaction to her suggestion that he come inside where it’s warmer.

“I couldn’t do that,” he says, shuffling his feet and averting his eyes like he’s a seventh-grader at a school dance and the DJ just started playing “Save the Best for Last.” “Your reputation would be ruined.” He does, though, accept a blanket – though I doubt he needs it after the heat generated by their prolonged hand-brushing.

MY BOYS | The next morning in the inn’s common room, Claire tries to tell Ned that the uprising will end in tragedy. He might be a little more open to your divinations, Claire, if you weren’t so off-putting while making them. She’s interrupted when Dougal’s men and a trash-talking table of guys get into a fistfight.

After it’s over, Claire patches up the men and scolds them for so often allowing testosterone to override common sense. Murtagh interrupts her harangue to say that the men were fighting for her honor. “You’re a guest of the MacKenzie,” she is informed. “We can insult ye, but God help any other man that does.” Aw, guys! Claire shows her thanks by making a masturbation joke at Rupert’s expense, and even Dougal smiles. (Side note: I love Caitriona Balfe’s face in the beat between making the joke and getting a reaction. She takes Claire from ballsy self-assurance to oh God what have I done? in seconds.)

But don’t let Dougal’s easy laugh fool ye: He’s still hella suspicious of the Sassenach. So when he gets her alone, he demands to know why she’s sowing seeds of doubt within his gang. Before she can really answer, the young man from the first village appears… and he’s a Redcoat… and he’s got lots of other Redcoats with him. His name is Jeremy Foster, and he’s got one question for Claire: “Tell me, madam, are you here by your own choice?” And while Ms. Beauchamp is pondering his query, we cut to black. What’s it gonna be, Claire Bear?