Thursday’s A Million Little Things ended with a huge surprise for both Maggie and the audience. When a doctor requested to speak with the breast-cancer survivor during a scheduled check-up, Maggie feared that he was going to tell her that her disease had returned.

Instead, he informed her that she is pregnant.

The revelation came at the end of an hour that saw Maggie’s return to the United States, as well as her first real interaction with Gary and Darcy as a couple. Real quick, let’s cover the basics:

* The episode took place as Europe and the United States were just beginning to become aware of the coronavirus as a very bad illness. So when Maggie’s six-month checkup in England was cancelled — as was Eddie’s “non-essential” pain treatment later in the episode — she said a temporary goodbye to Jamie then flew back to Boston to have the appointment take place there.

* Maggie arrived at Delilah’s and realized that Gary and Darcy were living there while Delilah was in France. Things were a little awkward among the three of them until Maggie slipped and said something that led Darcy to realize that Gary had been consulting with Maggie about Darcy’s post-traumatic stress disorder. Darcy was mad but didn’t ask him to change his relationship with his ex. “I’m just asking you to realize how much that affects me,” she said. 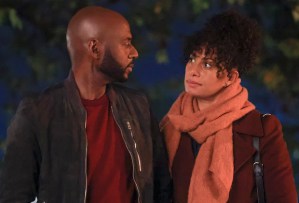 * Another COVID-19 casualty? Rome’s movie. The production lost financing and was shut down before it even got underway — they didn’t even get to have the table read! — and Rome was in a bad place about it until Regina rallied their friends to participate in a table read at Delilah’s house that evening.

* In an attempt to remove temptation from his home, Eddie flushed all of his doctor-prescribed narcotics down the toilet. But then the appointment for him to get a pain-relieving cortisone shot was cancelled, and he wasn’t sure he’d be in any shape to attend Theo’s school production of Oklahoma! that evening. And then he couldn’t get a refill on the prescription, because he’d flushed through two weeks’ worth of the meds, and it’s a controlled substance. So when he and Gary were at Rome’s apartment, Eddie spied some Vicodin there and pocketed it. Then he popped one just before Theo’s show.

* Unbeknownst to Delilah, who now is stuck in Europe for the foreseeable future after her father fell and broke his hip, she and Regina nearly lost the Someday building because of a clerical error made by Katherine’s assistant, Carter. But it turned out that the opposing lawyer, Alan, knew Jon and was the person on the other end of his final phone call, and Jon’s death really affected him. So Alan generously cut Katherine & Co. a break, and they can keep the property.

Phew! Now, back to Maggie’s pregnancy. We hopped on the phone with Allison Miller to talk about her show’s return, that Gary-Maggie-Darcy situation and why Maggie-as-mom isn’t as done a deal as it might seem.

TVLINE | Let’s go back. It’s been a while since fear of a cancer resurgence was a focal point of Maggie’s storyline, but it’s always there, right? I imagine it’s always in the back of her mind.
Yes. It’s always there, and then the reminder of having to get a checkup every six months is always going to be looming, too. So, she’s still very much living in the trauma of going through cancer treatment. The last thing on her mind is pregnancy. It’s just off the table for her, until it’s very much on the table.

TVLINE | We talked a bit last season about when Maggie was defending Delilah from the lactation consultant and how that speech was the first indicator that Maggie was entertaining the idea of being a mom herself at some point in the future. Where do you think she is, mentally, on that front before she gets the news?
I think that Maggie very much wants to be a mother in the future, and the timing of this is impossible. In my interpretation of where Maggie is with her health, she is still doing hormonal treatment, and it would be really dangerous for her and for the baby. So, it’s putting her in such a difficult position. Because I think in another scenario, where she hadn’t just finished chemo, then she’s having to think, “OK, do I want to have a child with this man I barely know?” And that’s the leading factor in any decisions. But she has so much else going on. It’s a very, very tough spot, and I think there’s going to be some real grieving that happens if this doesn’t continue. The choices are going to be very heavy.

TVLINE | I had not even considered the fact that she was still in a form of treatment. That’s so gutting.
Yeah, and it makes the conversation around abortion that we’re going to be having even more complex. 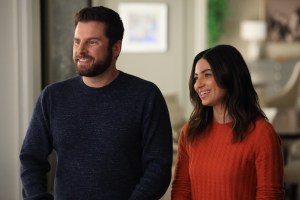 TVLINE | Before all of this kind of blows up our episode, it’s already not a super-fun one for her. Talk to me a little bit about coming back and seeing Gary and Darcy playing house at Delilah’s.
I think her main prerogative with Gary and Darcy is to not mess things up for them. She already feels like a burden on their relationship and, regardless of any feelings that she may have for Gary romantically, she views him as a person she cares a lot about and so, she wants him to be happy. And Darcy seems very cool.

So, I think Maggie entering a room with both of them just automatically puts her in, like, overdrive trying to accommodate and make things cool, which inevitably backfires because that’s how Maggie operates. [Laughs]

TVLINE | That friend group is all up in each other’s business, so I would imagine that Maggie might be worried that someone would immediately notice that — for instance — she wasn’t drinking wine at the table read at the end of the episode, and what that might mean.
Oh, I think she’s on high alert. She’s looking around that table trying to see who’s seeing her, and then, of course, Gary is looking at her in a way where she knows she’s busted. It’s because every single character is conveniently observant at certain times and conveniently naïve at others. [Laughs] 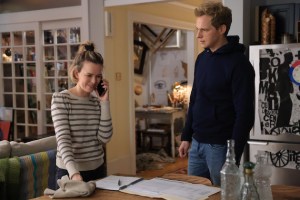 TVLINE | What can you tell us about Jamie and Maggie and how they may or may not be in contact now that she cannot physically return to England, at least for a while?
Well, at first, they are just talking on the phone and FaceTiming, so there will be a very serious conversation that happens between the two of them, as is required.

What did you think about A Million Little Things‘ return? Sound off in the Comments!