The tone of Superman & Lois has previously been compared to “Friday Night Lights with superheroes,” a description that’s never been more accurate than it was on Tuesday.

The CW drama’s third episode passed with nary a mention of Captain Luthor, nor the potential dangers of Future Superman, opting instead to tell more intimate tales about honesty, commitment and — you guessed it — football! Specifically, we witnessed Jordan go from the jocks’ target to their equal, using his powers to secure a spot on the Smallville High football team. Heck, the coach was so impressed by Jordan’s abilities, he made Jonathan run laps as punishment for not disclosing his brother’s talents earlier.

Of course, Jonathan wasn’t the only person opposed to Jordan’s newfound sportsmanship. When Clark discovered that his (somewhat) super-powered son was recklessly using his increased strength on the field, he was furious, leading to a heated confrontation that ended with Jordan yelling, “Everything you do is a mistake! … I just wish you would go back to not being around anymore.” That one hurt.

But after seeing how much progress Jordan was making on the team — he even befriended Sarah’s ex-boyfriend after apologizing for kissing her at the party — Jonathan stood up for his brother, convincing Clark to let Jordan play. The only catch? Clark is now serving as the goofy new assistant coach in order to keep an eye on Jordan. (We’ve seen plenty of helicopter parents in our day, but Clark might be the first one who can literally fly.) 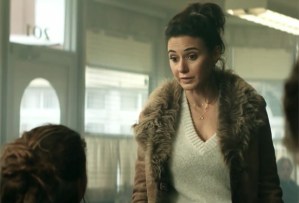 Meanwhile, Sarah will be attending all future football games as a mere spectator. Lana’s daughter abruptly quit the cheer squad this week, part of her desperate need to change “everything” about herself. Lana pushed back, claiming that she just wanted to keep her Sarah safe, to which she countered, “Why, because you think I’m going to kill myself? How many times do I have to tell you, I’m fine!”

It was a difficult moment to watch a mother and daughter experience, but it was all a prelude to an incredibly long-overdue conversation. Plenty of tears were shed as the two Cushings were finally honest with one another; after Sarah explained that she felt “trapped” with no future, Lana admitted that she does everything she can to conceal the imperfections of their home life from the world. “I’m the most full-of-crap lady in Smallville,” she said. “And most days, when I’m smiling, that’s not how I’m feeling inside.” 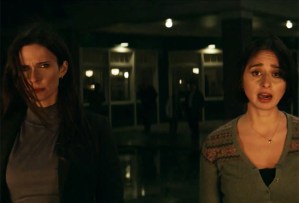 But not all of this week’s drama went down between parents and children. Going off a tip from a woman who claimed that Morgan Edge was responsible for her son’s disappearance, Lois and Chrissy tumbled deeper down the investigative rabbit hole, encountering more than a few obstacles along the way. (“I hate to ask, but you don’t happen to drive a station wagon that’s on fire right now, do you?” Chrissy asked upon discovering that someone blew up Lois’ car.)

But as Clark was quick to remind his wife, this wasn’t her first Molotov cocktail, so Lois pressed on. And even though their key source wound up hospitalized at the hands of a super-powered baddie known as Subjekt 11, Lois and Chrissy still gathered enough information to whip up a pretty impressive murder board.

As for the baddie, he skipped town after getting his handsome butt handed to him by Superman, only to encounter a far more dangerous threat: Leslie Larr! The mysterious redhead vaporized him with her laser vision before he even had a chance to scream, then reported back to someone over the phone: “It’s done. I’ll call a team.”

Your thoughts on Superman & Lois Episode 3? Drop ’em in a comment below.