Monday’s episode of The Good Doctor marked a major milestone for Shaun and Lea — one that promises to radically alter the trajectory of their relationship.

At the start of the hour, Lea’s car was seized by a sleazy tow truck operator named Tricky, who refused to cut her any slack for having her vintage automobile parked in someone else’s spot. St. Bonaventure’s heroic head of IT insisted the spot belonged to her, but Shaun refused to lie on his girlfriend’s behalf.

Later that day, Lea skipped lunch to gather dirt on Tricky. In her office, she explained to Shaun why she was so upset. “I turned to my boyfriend for support and he hung me out to dry,” she said. “This isn’t about honesty — this is about having my back. We’re a team now, working together for a common goal. Right now, our goal is to get my car back.”

Shaun eventually handed his phone over to Lea so she could create dozens of phony Yelp accounts and draft enough bad reviews to drive Tricky’s Towing out of business, should it come to that. The following night, she and Shaun confronted Tricky at the impound lot, where Lea threatened to publish each and every one of her anonymous complaints. But before things went any further, Shaun agreed to pay whatever it cost to get the car back — or so it seemed. He dropped his backpack and followed Tricky into his office, leaving Lea the keys to her cherry-red ride so she could sneak off and retrieve it before Tricky noticed. Once she got a move on, Shaun hightailed it out of the office and ran towards the moving vehicle, hopping in before Tricky had a chance to catch up to him.

Back at home, Shaun revealed to Lea that he had in fact left $250 on Tricky’s desk — the minimum payment required to make sure Tricky wouldn’t retaliate. He told her that she had been a bit “crazy” the last two days, and he needed to help her distinguish right from wrong. That’s when Lea came forward and acknowledged the reason for her erratic behavior.

The big reveal was met with total silence by Shaun, whose facial expression was a bit hard to decipher. He was clearly at a loss for words, but he also looked… kinda happy? He certainly didn’t look upset. 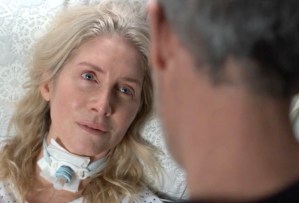 * Shaun and Morgan treated Dannie Miller (Lost and Once Upon a Time vet Elizabeth Mitchell), whose cancerous tumor bathed her brain in dopamine and woke her from a 10-year coma. The awakening was short lived, but long enough for Dannie to sign a DNR and tell her dearly devoted husband Elias (Instinct‘s Michael B. Silver) that it was time for to move on with his life.

* Glassman returned to operating room to perform a life-altering procedure on Jeffrey Williams (Firefly Lane‘s Michael Taylor), a 21-year-old with ankylosing spondylitis. Glassman needed two residents to assist him and Andrews — but first, the residents’ skills were put to the test. Claire secured the first slot, followed by Asher, who beat out fellow first years Jordan and Enrique, as well as (oof) Park. 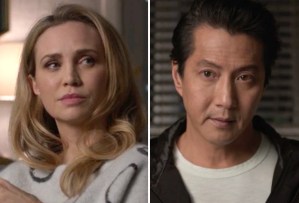 * Park was so disappointed in himself that he polished off the last of Morgan’s ice cream. Morgan, who was also down in the dumps, returned to the apartment to drown her sorrows in some Cherry Garcia, only to discover that her roommate got to it first. The two wound up bonding over their no-good, very bad days, and Morgan helped Park see what he should have done differently when during his surgical skills test. In turn, Park returned home the following night with a fresh pint of Ben and Jerry’s for his roommate. What followed were some lingering stares (see photo, attached right) that would seem to confirm the inevitable: Park and Reznick are totally going to get. it. on. Not immediately or anything, but c’mon: It’s gonna happen.

* Oh, and not that we needed any more proof, but Claire can sang. Her rendition of The Highwomen’s “Crowded Table” was just sublime, and the perfect soundtrack to that life-changing moment for Lea and Shaun.

Were you shocked by The Good Doctor‘s last-minute pregnancy reveal? And what’d you think of the episode overall? Drop a comment with your thoughts below.